If there ever were an industry that had its back up against the wall, it would be the movie theater industry. As you’ll see with this AMC Entertainment Holdings (NYSE: AMC) stock forecast, there are many trends to factor in. And to start, let’s rewind a few decades…

In the late 2000s, Netflix introduced streaming and essentially put the video rental business (Blockbuster) out of business overnight. For any younger readers, Blockbuster was a store that you had to visit if you wanted to rent a movie. In those days, movies came in the form of cassette tapes that you had to put into a small machine called a VCR.*

While streaming hasn’t quite wiped out movie theaters yet, it has definitely put them on life support. Attendance at movie theaters has been declining for years, even before the pandemic made it illegal to sit in a theater. In 2013, movie theater attendance peaked at 1.34 billion admissions and fell 7% to 1.24 billion in 2019. Also, prices for movie tickets and popcorn have always been laughably over the top.

So is AMC at the end of a decades-long decline that will end in bankruptcy? Or does it have some tricks up its sleeve to turn the tides back in its favor? 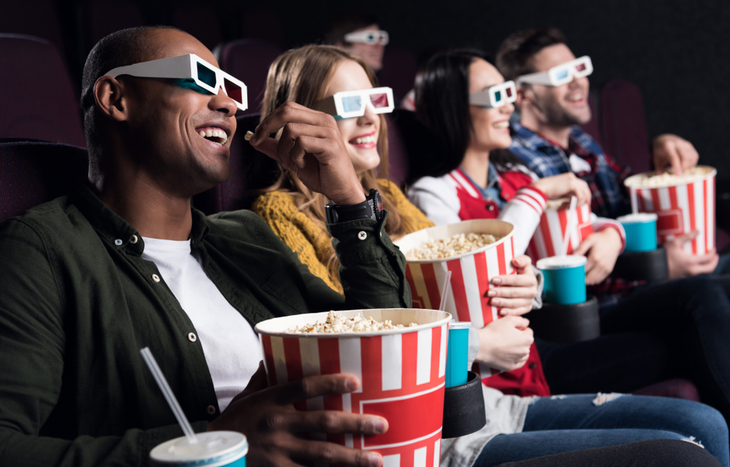 Note: I’m not a financial advisor, and I am offering my own research and commentary. Please do your own due diligence before making any investment decisions.

Note: AMC is expected to report earnings on November 1, 2021.

It wouldn’t be right to give an AMC stock forecast without first talking about the Reddit group WallStreetBets. In the first two or three months of 2021, members of this stock and options trading group on Reddit identified a few potential stocks that were heavily shorted. These stocks then became the target of a short squeeze.

If you’re not familiar, shorting a stock is a risky strategy where one investor borrows shares of stock and immediately sells them in hopes that the price will go down. If the price goes down, that investor can buy the shares back at a lower price and profit from the price change. However, if the price goes up, then the investor in trouble because they still owe shares of stock to the person that they borrowed from. This means that they will have to buy the shares at a higher price and take a loss. The higher the stock price goes, the more money they lose.

It’s a little confusing, so here’s a quick analogy to describe how a short squeeze works using apes and bananas.

Anyway, a short squeeze occurred in early 2021, which caused AMC  – and GameStop (NYSE: GME) – stock to skyrocket out of their decade-long downward spiral. AMC stock jumped more than 500% from $2 per share to more than $10 per share during the month of January. It jumped another 500% from $10 to $50 from May to June.

It’s important to understand that these price increases were largely the result of Reddit traders targeting short sellers, not the result of fundamental changes in AMC’s business. Since the squeeze, the AMC stock price has still been incredibly volatile and currently sits at around $40.

If you’re interested in stocks with more reasonable prices relative to fundamentals, check out these top consumer staple stocks and agriculture stocks. These opportunities pay steady streams of dividends. But back to AMC…

So what does the AMC stock forecast look like from here?

Despite the stock price increase, nothing has really changed for AMC. It lost an impressive $4.59 billion in 2020 and has more than $10 billion worth of debt on its balance sheet. For a short period, it looked like the pandemic would be the final nail in its coffin. However, it was able to weather the storm and now is, hopefully, looking at brighter skies ahead.

AMC stock was down 70% in 2020 but is up 28% over the past five years, mainly due to the Reddit-induced short squeeze.

What makes AMC stock so unique is that 80% of it is held by retail investors. In the United States, institutional investors, like hedge funds and college endowments, almost always own the bulk of shares in corporations. This is important because it’s the majority shareholders who will vote on important company decisions.

CEO Adam Aron has also shown that he’s very receptive to the wishes of retail traders and stated “[Retail investors] own AMC. We work for them. I work for them.” He’s also made a point to start tweeting out major company announcements since that’s the best way to reach shareholders.

To look at a dim AMC entertainment stock forecast, it’s easy to imagine a scenario where the meme stock mania slowly loses steam. As more earnings reports come out with massive losses, retail traders could start to lose faith and sell off their positions. The mania would end completely, AMC wouldn’t meet its debt obligations and the stock would continue its downward trend.

On the other hand, 80% of the company’s stockholders are fiercely loyal to the company. A quick scroll through WallStreetBets offers plenty of evidence that they’re prepared to hold the stock through thick and thin. A rosy AMC stock forecast would be that these shareholders refuse to sell no matter how bad the news gets. If there’s never any selling, then there’s technically no reason why the stock would go down in price. AMC could buy more time to boost attendance and eventually right the ship.

AMC has also announced that it’ll start accepting Bitcoin, Ethereum, Litecoin, Bitcoin Cash and potentially even Dogecoin by the end of 2021. While it’s hard to imagine how this will have a major short-term positive impact on its stock, it shows that AMC is interested in innovating its business.

In the short term, AMC’s stock price will likely continue being incredibly volatile as short sellers and retail investors play tug of war. For a stock like AMC, a long-term prediction goes only so far as 2022, which is when its fresh surge of cash will run out. True, it’s not a whole lot of time to right the ship, but, as 2021 has shown, stranger things have happened.

I hope that you’ve found this AMC stock forecast to be valuable in determining whether AMC is a good stock to buy! As usual, all investment decisions should be based on your own due diligence and risk tolerance.

If you’re looking for even better investing opportunities, sign up for Wealthy Retirement. It’s a free e-letter that’s packed with investing tips and tricks. You’ll hear from investing experts on some of the best investment opportunities today.