The report shows initial net revenue of $45.6 million in Q4, bringing the total for 2021 to $122 million. Moreover, the company expects ORLADEYO to lead the HAE prophylaxis market with peak sales of $1 billion.

For a late-stage pharmaceutical company, results like these are huge for attracting investors. That said, BCRX stock is mostly avoiding the stock selloff affecting the broader market.

With promising sales results and guidance, what can we expect from BCRX stock in 2022? Keep reading to find out. 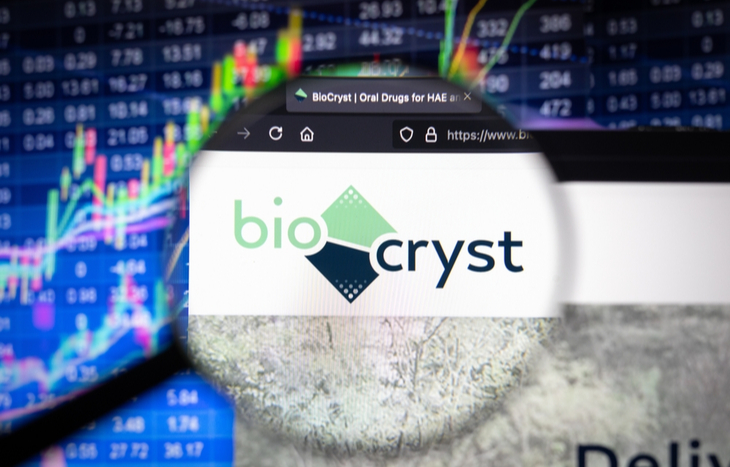 A Quick Briefing on BioCryst Pharmaceuticals

At BioCryst Pharmaceuticals, the team is developing treatments for rare diseases without an effective cure. In particular, BCRX works with the biological pathway of the disease when enzymes play a role. So far, the company’s approved drugs include:

On top of this, the company also has three other core development programs in the works.

As you can see, BCRX has a ton of potential in its pipeline. Like many drug makers, BioCryst’s success will come down to clinical trial success and market adoption.

Following its drug approval in late 2020, BCRX stock went on a tear last year, gaining over 250% at its highs. Since hitting a 52-week high of $18.48 per share, BCRX shares are drifting lower, currently setting around $14.50.

Until the company’s positive results were released last week, the stock found support around $12.20 – $12.50. At the same time, after blasting through resistance around $15, BCRX stock is back under these levels.

However, it’s promising to see heavy volume pushing share prices higher while fading as the stock drifts lower. In other words, buying seems to be higher than selling right now.

At the same time, the revenue growth is failing to reach the bottom line as operating expenses are also increasing. Selling expenses ran up over 100% on top of the cost of sales, advancing 59% from a year ago.

Altogether, BioCryst posted a net loss of $58.8 million in the quarter. Having said that, as the company progresses its pipeline, it will cost money. And even though a drug is approved, it still costs money to ramp production and market it.

Then again, the entire process hinges on the market’s acceptance of the drug. In this case, data shows positive patient approval with 70% remaining on the drug in the first year.

The Case for Buying BCRX Stock

BioCryst investors have a lot to look forward to, with several promising treatments progressing through trials. Likewise, the approval of ORLADEYO is giving the company life with massive sales growth.

Furthermore, all major payors and pharmacy managers now cover the drug. As the treatment gains momentum, look for continued growth in BCRX’s top line. So far, the company is confident the treatment will achieve at least $250 million in net revenue this year. If this is the case, it will be over 100% annual growth.

On top of this, physician feedback is encouraging as new prescribers continue to multiply. Market research confirms that physicians with over seven patients are expecting to double their product use.

More importantly, BCRX is enrolling patients in two trials for its late-stage BCX9930. If everything goes according to plan, the company plans to advance the program by submitting regulatory approval. Data from the J.P Morgan Healthcare Conference shows the drug’s potential and how it can expand its total number of patients.

And lastly, BioCryst has several collaborations and licensing agreements. With partners in Japan, Israel, Iraq and Korea, BCRX has the potential to become a global pharmaceutical maker.

The Case Against BCRX Stock

On the other hand, there are several big risks to consider before buying BCRX stock. If you plan on investing in pharmaceutical stocks, it can help to look at the company from another angle.

First, the company is losing money and may never become profitable. If this becomes the case, they will need to raise funds or go bankrupt. Raising funds can dilute ownership and leave investors underwater. Luckily for BCRX, they are well financed for now.

Second, the operation relies heavily on future earnings. If the pipeline hits a setback, investors may look elsewhere. Also, if competitors develop a better method, the research can become worthless.

As you can see, there are many factors to consider. Although the company is progressing now, it can always run into setbacks in later trials.

What to Expect Going Forward

It will be an exciting year for BioCryst investors, with a slate of new data expected this year. With BCRX stock down 20% from its 52-week high, it will likely take another positive catalyst to push it higher.

Yet with the company now enrolling patients for its latest trials, we should see news sooner rather than later. With a rich pipeline of drugs, there is a ton of potential in BCRX stock. At the same time, much of the company’s success will be determined by the approval of its drug candidates.

So far, ORLADEYO seems to be a hit with growing prescribers and high retention. We should see continued momentum with expectations of becoming the market leader.

And if everything goes accordingly with the BCX9930 trials, we could see another drug up for approval. Not only that, but the drug can be potentially used for several rare diseases.

Having said that, don’t overlook BCRX this year. The company is progressing swiftly with big plans to expand. Look for the company to continue making big moves this year.