Beyond Meat Stock: Restaurant Chains to the Rescue

Beyond Meat stock looking to regroup. In fact, its one of the few companies to see some stock success in recent weeks. The Los Angeles-based company is enjoying a market spike due to the recent push for more plant-based meat substitutes by restaurant chains.

Beyond Meat (Nasdaq: BYND) is making its way into menus of major chains across the country. Moreover, rival Impossible Foods is falling behind after its Burger King “Impossible Whopper” took a sales hit. 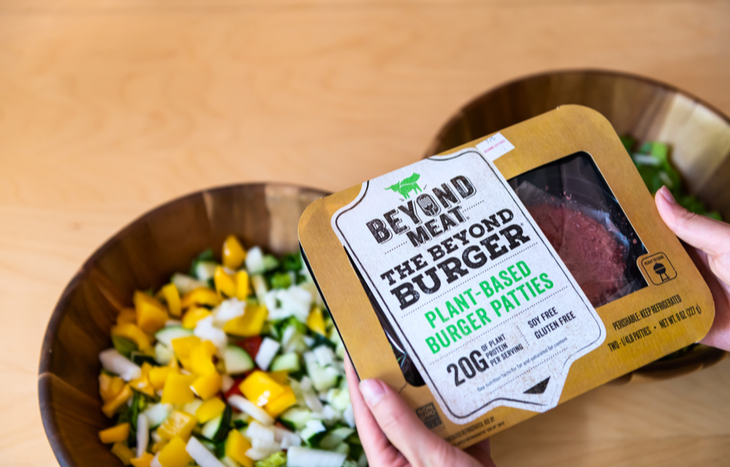 Why is Beyond Meat Stock Flourishing?

Partnerships are the key to the success of Beyond Meat stock. Recently, sit-down restaurant chain Denny’s announced it will serve Beyond Meat burgers in more than 1,700 locations across the U.S. and Canada. In addition, Starbucks announced that it will explore plant-based menu options as well.

Outside of the Denny’s expansion, Beyond Meat also has partnerships with:

A&W has a breakfast roll with Beyond Breakfast Sausage. Carl’s Jr. and Hardee’s have Beyond Burgers. KFC is testing Beyond Fried Chicken in Atlanta. Subway has had its own Beyond Meatball sub since September 2019. TGI Fridays has a Beyond Cheeseburger. As you can see, more chains are joining in on the fun. You can also find Beyond Meat meals at Disney World!

The biggest play comes at the hands of fast-food giant McDonald’s, which looks to also be partnering with Beyond Meat. It is currently testing a Beyond Meat patty at 52 locations in Canada.

This isn’t the most recent setback for Impossible Foods, as Burger King recently dropped the price of its “Impossible Whopper” due to a slip in sales. The Los Angeles Times reported a drop to about 28 daily sales per store. This was down from 32 previously.

Where is Beyond Meat Stock Currently?

Beyond Meat stock is currently trading around $50. For some perspective, it ended 2021 around $65. The stock took a major hit, much like the rest of the market, to begin the year. However, it’s quickly regaining momentum.

Investors are taking notice, including banking giant Commerzbank. The major German bank bought 207,355 shares of Beyond Meat stock in the past. That’s more than six times its original holdings of 40,382 shares.

It was at its highest through the end of July and into early August. However, it quickly began to decline throughout the remainder of the year.

This is why it’s important to take this surge with a grain of salt. While the current market prices are encouraging, last year was a complete roller coaster.

Investing into the New Year

Investing in Beyond Meat is still a risk at this point. Yet sometimes taking the risk pays off heavily. One thing is crystal clear: More restaurant chains are entertaining the idea of meat substitutes than ever before.

Make 2022 a year of great investments. With Beyond Meat stock regaining momentum, now can be your time to take advantage of the biggest gains in the market. You can also learn more about Beyond Meat stock and the growing craze for plant-based meat substitutions on the company’s website.