Building wealth is the process of accumulating, keeping and growing your assets. Assets can include your cold hard cash, but they are more than that.

They include real estate, like your home. They include financial securities like stocks, bonds, currencies, commodities and options. They can even include valuable alternative investments like works of art, fine jewelry and collectibles.

Building wealth isn’t something you do for a short stretch of time. Building wealth is an entire approach to living. It is a lifestyle and you need wealth-building strategies in order to do it. By building wealth, you can eventually reach the goal of achieving true financial freedom.

Let’s take a closer look at what it means to build wealth. 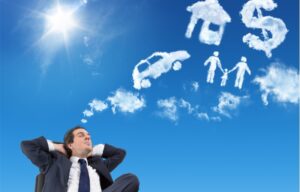 Oftentimes, people get confused between earning income and building wealth. You may hear that a person makes $1 million per year in salary and think that this person must be wealthy. But you might be wrong.

Income is an essential part of building wealth. But it is not identical with it. That is because income becomes wealth only if you preserve and grow what you earn.

How Much Wealth Do Americans Have?

So far we have mentioned income, saving, investing and spending. These are all key components of building wealth.

But there’s another essential factor that we have not yet touched on: debt. Debt is money owed to someone else. That means that when you have a substantial amount of debt, some of the assets you “own” do not really belong to you.

Let’s say you have a savings account with $100,000 in it. But you also have total outstanding credit card debt totaling $15,000. This is a substantial amount of credit card debt.

In reality, your wealth here isn’t equal to the $100,000. Instead, your wealth is actually what you have left after you subtract the credit card debt from the assets and savings.

In other words, your true wealth here is:

What Is the Net Worth of the Average American?

The mean net worth of all American households as reported by the Federal Reserve is $692,100. This may sound shockingly high to you.

Do half of all households in the United States really have a net worth of that much when adding up all assets and subtracting out all debt?

The answer, actually, is no. They do not. That’s why it may be even more enlightening to look at the median value of all U.S. households. This can give us a better idea of what most people are worth.

The median wealth of the United States per household is $97,300. This probably sounds much more realistic to you.

What accounts for the difference between mean and median net worth? The mean is so much higher because it includes millionaires and billionaires in its simple average calculation. This rockets the simple average higher.

But the median net worth is not affected in the same way. It simply shows that half of all U.S. households have more than $93,700 in value. It doesn’t indicate how much more.

So let’s now turn to the question of how to actually build wealth.

How to Build Wealth

Building substantial wealth is not easy. It takes time, dedication and patience. But it is possible to amass significant wealth if you apply some grit and determination and stick to these basic keys to building wealth.

In order to build wealth, you need to tackle all three of the following: income, debt and investing. Otherwise, it will be nearly impossible to do.

Let’s go through each one of these components of how to build wealth:

Increasing your income is the starting point for building wealth. This, of course, starts with having a full-time occupation.

It’s not easy to increase the wages or salary of your current job. One way to do so is to look for an internal promotion. Another way is to look for a job with another employer. The latter can often lead to bigger gains.

But income doesn’t begin and end with your primary job. You have other options as well:

As you can see, there are many moneymaking opportunities out there. But making money is only the first step of the equation. You also have to keep your money. And you can do this through a combination of saving and spending.

Debt can be a major stumbling block to building wealth. The overall household debt for the United States stands at more than $13.67 trillion. The typical American household carries an average debt of $137,063.

There are many different forms of debt that people carry, including…

But whether your debt is considered good or bad, increasing your net worth is largely dependent on decreasing or eliminating these liabilities.

Paying off debt can be a slow process. But it doesn’t have to be. In this article, we lay out the steps for how you can pay off your debt fast.

Which debt should you start paying off first? That depends on your mindset and the kinds of outstanding debt you have.

There’s a secret you should know. If you want to build wealth, boosting your income helps. Paying off your debt is necessary. But do you want to know the real key to building wealth?

You can’t build real wealth without investing. Because investing your money is the only component of this equation that results in significant compound returns.

Let’s say you earned 10% per year on $1,000 you invested and your interest was compounded annually. You’d have a return on your investment of $100 that year. That would put your new total at $1,100.

Now, the fact that your investment is compounding means you earn a return not just on the principal you originally invested, but on the return you earned, too.

In other words, you’d be a millionaire without having added a dime of income to the pot aside from the actual returns on your investment. See the power of compounding?

That’s why investing becomes such a key to building wealth throughout your life.

Building wealth is a lifelong process, and it is not easy. But everyone can do it. If you’re looking for more information, check out these additional articles on the best ways to build wealth by each decade of your life:

If you’re interested in building wealth so that you can truly achieve financial freedom, continue exploring some of the best investment research today…