Now isn’t a great time to be a manufacturer that relies on semiconductor chips for production. However, this chip shortage update can provide much more clarity for investors. Persistent global shortages have made it exceedingly difficult to secure chips, which has caused widespread disruption in virtually every production environment, from vehicle manufacturing to electronic assembly. Originally caused by COVID-19-related supply chain disruptions, the problem persists under a lopsided supply and demand battle.

Unfortunately, the latest global semiconductor chip shortage update signals continued turbulence ahead. According to a recent government survey of 150 major domestic manufacturers, the problem is reaching critical mass. Lack of chip availability, coupled with increased production demands, is putting manufacturers in a tight spot, all the while driving inflation.

Here’s a look at the current state of the global semiconductor chip shortage as we move into the back half of the first quarter of 2022. 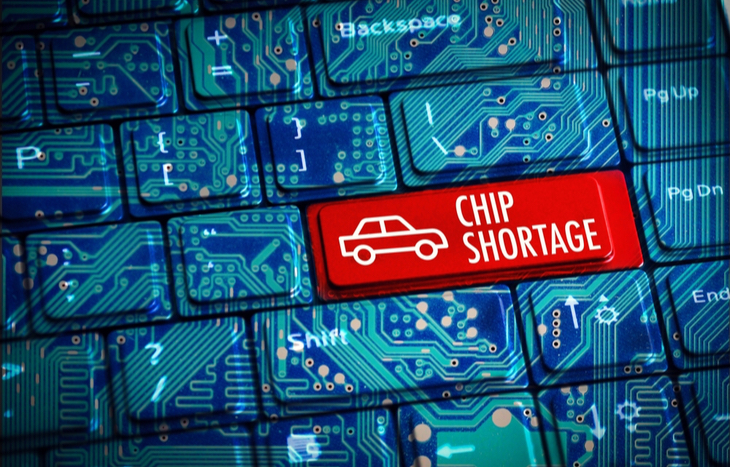 The crux of the semiconductor problem is one of supply and demand. While demand for chips rose 17% from 2019 to 2021, supply remains stagnant. It’s estimated that the world’s major chipmakers, largely focused in Taiwan, South Korea and Mainland China, are operating at 90% production capacity, effectively bottlenecking supply. COVID-19 and its variant waves have only exacerbated production issues.

Production bottlenecks aren’t easily alleviated, either. Taiwan controls as much as 60% of the world’s semiconductor foundry market, with much of that control consolidated within the Taiwan Semiconductor Manufacturing Company (TSMC). This stranglehold on the market leaves little room for competition outside of a few key global players.

While the United States and other countries have proposed initiatives to kickstart domestic semiconductor production, materials scarcity and the cost of production are hard-to-ignore market barriers. Even with a concerted effort, it would still be years before domestic producers could scale to production levels meaningful enough to alleviate supply chain constraints.

Market analysts expect demand for semiconductor chips to continue rising in 2022. The reason? These microscopic materials are essential for the function of a growing number of in-demand products. Beyond phones, computers and other electronics, semiconductors are integral for everything from vehicles to household appliances. As consumer demand grows in tandem with product innovation trends, semiconductors become more and more invaluable.

As we’ve already seen over the past 12 months, semiconductor shortages have put manufacturing on notice. In 2021, the chip shortage ravaged automakers, forcing production halts from the likes of both Ford (NYSE: F) and General Motors (NYSE: GM). In 2022, these same automakers are adapting to the shortage at the expense of popular features like heated seats. It’s a strategy many manufacturers have adopted in the face of the alternative: full production stoppages.

Outlook on Semiconductor Shortages in 2022

Struggles have persisted in the first quarter of 2022. Yet, there’s general optimism that supply and demand will trend back into balance later in the year.

JPMorgan analyst Gokul Hariharan expects the situation to become less dire mid-year as more supplies become available. He’s quoted as saying, “we’re not expecting 2023 to be in supply shortage” and that it’s a situation JPMorgan is “really positive on over the next three to five years.” Other market analysts agree, citing an easing of supply chain constraints in the coming quarters that could restore a regular cadence to production and deliveries. Ford and General Motors have also issued guidance that sees chip concerns beginning to alleviate in the back half of 2022.

Chipmakers are proceeding with caution, however. Several major semiconductor producers have urged customers and analysts to forecast conservatively, citing squeezes that could last into 2023. The trepidation stems from the prospect of panic buying. This is something Tesla (NASDAQ: TSLA) CEO Elon Musk spoke to on a recent investor conference call. Musk and cautious chipmakers predict that as more supply becomes available, manufacturers are likely to overcorrect for fear of future shortages, buying in excess that artificially inflates demand for a period.

Most eyes focus on the immediate problem of satisfying demand through a bottlenecked supply chain. Forward-looking investors see the rippling problems that will emerge even after the market restores balance. Namely, the race to produce a 3-nanometer chip and secure the lucrative contracts that come with it.

Originally set to launch this year, 2022, TSMC delayed the production of its 3-nanometer semiconductor chip to focus all efforts on working through its backlog. Intel (NASDAQ: INTC) has done the same. Delays on the next generation of semiconductor equate to kicking the can down the road. This delays yet another bottleneck in the future. Production delays will hamper availability for these chips. And they’ll slow the development and launch of new products that rely on them. As a result, this may perpetuate a similar struggle in the future.

If the global semiconductor chip shortage resolves in 2022, there’s hope that chipmakers can pivot quickly to a next-gen line in 2023.

An End in Sight Could Assuage Numerous Problems

From production problems to inflationary concerns, rebalancing the global semiconductor market could prove to be the panacea the world desperately seeks amidst the current disruptive economic climate. According to analysts, producers and the chipmakers themselves, relief could emerge as soon as the back half of 2022. And while the potential for disruption could linger into 2023, there are forces hard at work to minimize this prospect.

Global semiconductor chip shortage updates over the past year have promised relief eventually. However, this appears to be the first with any prediction about when we could see meaningful resolution.