What is a Dead Cat Bounce?

Even a dead cat will bounce if dropped from high enough. It’s a bit of a morbid sentiment, but it’s an old saying that applies to a security that’s trending down in price. When the price of that stock goes from a sustained plummet to rebounding, then falling again, it’s called a dead cat bounce. And, unfortunately for most investors, it often represents a trap.

There are several key variables that drive a dead cat bounce to occur. Unfortunately, it’s extremely difficult to recognize one until it’s already occurred. By that time, many investors will find themselves holding shares of a stock that’s continuing a strong downtrend, dragging down share price and the price of their position.

Here’s a look at the hallmarks of a dead cat bounce, why one might occur and how to avoid becoming trapped in a bearish downtrend. 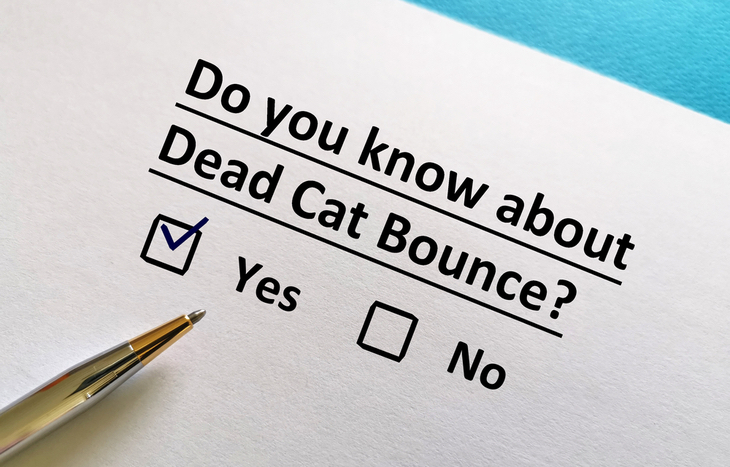 As mentioned, it’s notoriously difficult to recognize a dead cat bounce until it’s fully manifested on a stock chart. This is because many bounces take the form of bullish reversal patterns. Traders see the signs of an impending reversal and buy in. A small uptick in price often confirms this hypothesis… before dragging it all down in a sharp continuation of the original downtrend. Here’s an example:

ABC Company’s shares have fallen from $50 per share in January to $30 in July, in a steady downtrend. Then, at the end of July, shares kick back up to $33 and, over the course of several trading periods, move back up to $35. Then, in the first week of August, shares plummet from $35 to $29, before continuing to fall again.

Keep in mind that dead cat bounces are more likely to appear in generally bearish markets. While individual stocks may bounce, the factors that tend to drive a bounce are more often associated with broad market sentiment. Above all, look for a reason to attribute to the sudden uptick in a stock’s price. If you can’t find one, you’re more than likely looking at a short-lived rally.

Why Does a Dead Cat Bounce Occur?

There are several factors at play in a dead cat bounce. Both bears and bulls play a role in creating the bounce. Here are a few typical factors contributing to the continuation of a bearish downturn after a false reversal:

Some traders (usually bears) try to trade dead cat bounces as volatile periods. The problem lies in identifying one, which means it’s important to set safeguards. While many bounces manifest as reversal patterns, it’s important for traders to set stop losses that anticipate a bounce for the continuation pattern that it is.

The simplest way to trade what you believe might be a dead cat bounce is to set appropriate limits and stops. Establish a tight trailing stop that’s above the current support level; something like 5-6%. Then, set a price target that’s 5-6% below the current support level to short it. If you’re more of a risk-reward trader, you might consider a 2:1 risk-reward ratio: a stop-loss that’s $0.50 above the entry and a target that’s $1 below that level.

Keep in mind that it’s extremely risky to try and anticipate a dead cat bounce. There are virtually no signs that differentiate it from a bullish reversal pattern. That means a trader is effectively betting on a bearish continuation with no real signals to lend credence to that hypothesis.

If the name “dead cat bounce” doesn’t put you off from trying to trade this volatile pattern, take heed of its other name: the “suckers rally.” As you might be able to guess, this name comes from the tendency of overzealous bulls to jump back into a position that’s destined to fall to new lows. No matter what you call it, this chart pattern is a prime example of why it’s important to set proper safeguards when pattern trading, especially in the earliest stages of a pattern’s development.

A dead cat bounce can take any trader by surprise. Most only realize their mistake in hindsight if they’ve tried and failed to capitalize on one. If you’re one of them, the best you can do is live and let learn, and watch for future dead cats in the form of falling prices that seem to rally for no real reason. Remember, even a dead cat will bounce if dropped from high enough.