From Baltimore – Don’t fight the Fed.

As an investor you’ve probably heard that admonition countless times. But considering what the Fed may have in store for us in the very near future, it’s absolutely critical to heed it now.

If you’re unfamiliar with the phrase, it’s fairly straightforward. Basically, when the Federal Reserve is cutting interest rates and making it cheaper for consumers and businesses to borrow, corporate earnings begin to rise and stocks follow them up. As a result, you should put more of your portfolio into stocks.

On the other hand, when the Fed is raising rates and making it more expensive for companies and consumers to spend, earnings and stock prices are going to take a hit. So investors should shift money out of stocks and into safer assets.

The Fed is a powerful institution and can alter the direction of the economy and the stock market. Fighting against that is a risky undertaking in the best of times.

And these are far from the best of times.

I recently wrote about how the Fed is now acting like a helicopter parent. Chairman Jerome Powell and the rest of the Fed board are hovering over the market, looking to pick it up, dry its tears, and bandage its cuts and scrapes every time it trips and falls.

As part of its arsenal for battling the impact of the coronavirus pandemic, the Fed has established two corporate credit facilities with combined funds of $750 billion.

And it’s not shy about using them.

The last time the market took a dive – dropping about 5.9% over the course of the week of June 8 – the Fed stepped in on the following Monday with an announcement that it would start buying corporate bonds immediately.

The press release alone sent markets back up 2.7% over two trading sessions.

By the end of January, the Fed had purchased more than $7 billion in corporate bonds.

But the Fed can do more… much more.

And it may be eyeing the stock market.

At the moment it’s illegal for the Fed to invest directly in stocks – it would take an act of Congress to change that. But it’s pretty clear the financial wizards nestled in Washington’s Foggy Bottom neighborhood can get around that prohibition with relative ease.

In fact, they already are.

With the credit facilities mentioned above, the Fed is technically the banker, and the Treasury Department is the purchaser.

It’s got a fixer on Wall Street, too.

In March, the Fed retained the world’s largest asset manager, BlackRock, to make and manage its asset purchases. A March 25 agreement gave the investment firm “full power and authority” to act on the Fed’s behalf “with respect to the purchase, sale, exchange, conversion, or other transaction in any and all stocks, bonds, other securities, or cash…”

I’ve emphasized the words “purchase” and “stocks” in that sentence because buying stocks would be an unprecedented move on the Fed’s part.

Though globally, there is precedent for such a move. The central banks of Japan and Switzerland have bought equities in recent years. So they would be the Fed’s model if it chose to go that direction.

But what would it take for the Fed to roll out this dramatic – let’s call it nuclear – option?

Up, Up and Away

Many Fed watchers think the stock market would have to take a serious leg down, possibly testing the lows it hit in mid-March, for the Fed to buy stocks. Stepping in at such a moment would put a solid floor under the market.

And it might even send stock prices straight back up.

Chart Title: Not Fighting the Fed 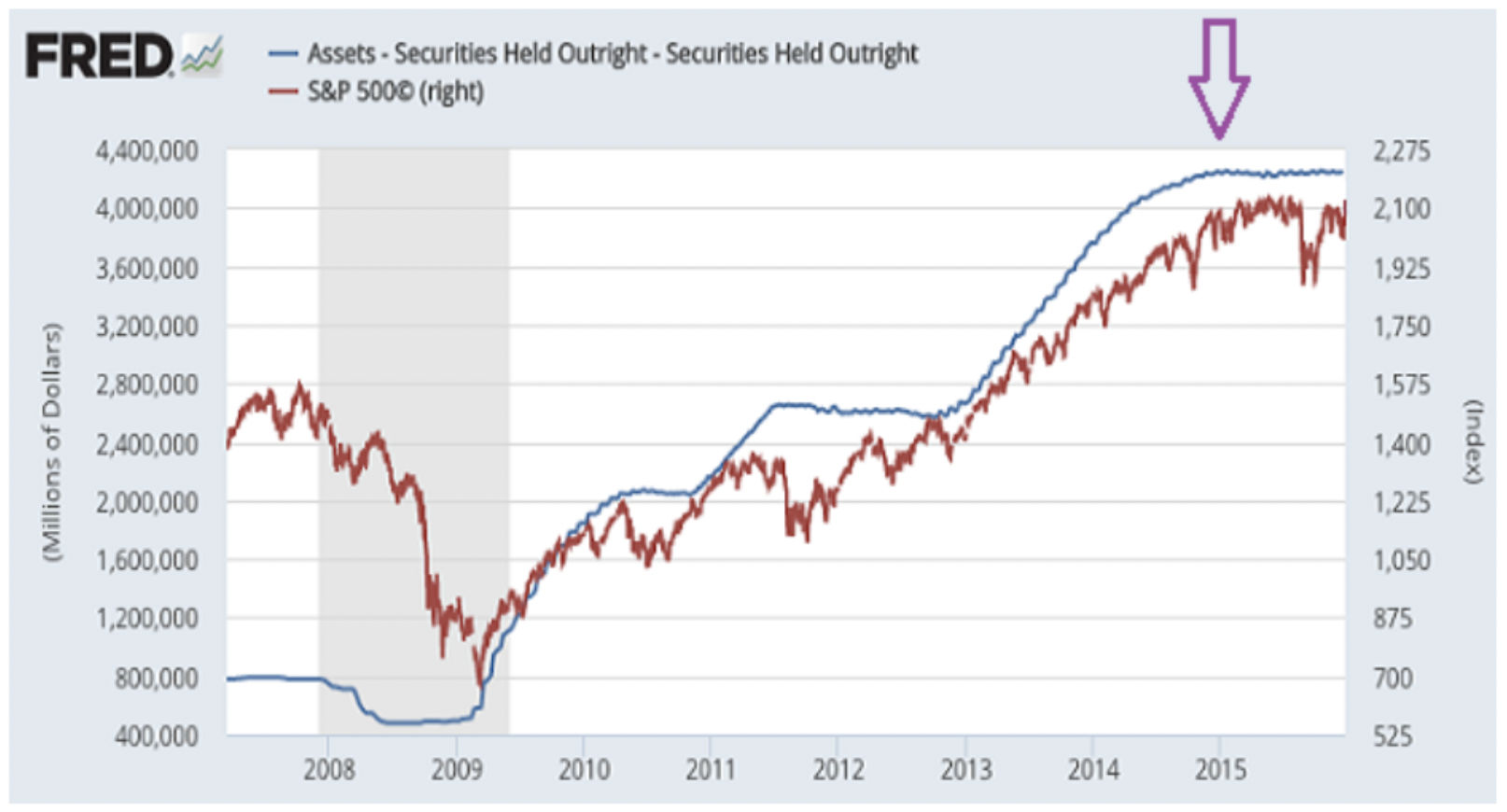 There is a serious correlation between the S&P 500 and the size of the Fed’s balance sheet.

If and when the Fed decides to prop up the market with stock purchases, investors will want to be along for the ride.