Unfortunately, Charles Dow passed away in 1902 and could not publish the entire Dow Theory. Partners working on the Dow Theory and Mr. Dow have published work expanding on his articles. Dow thought the stock market was a reliable barometer for the economy. By looking at the overall stock market, investors can predict the direction of individual stocks.

This musing by Charles Dow described his thinking on stocks, “A person watching the tide coming in and who wishes to know the exact spot which marks the high tide, sets a stick in the sand at the points reached by the incoming waves until the stick reaches a position where the waves do not come up to it, and finally recede enough to show that the tide has turned. This method holds good in watching and determining the flood tide of the stock market.” Read on for more information on the Dow Theory. 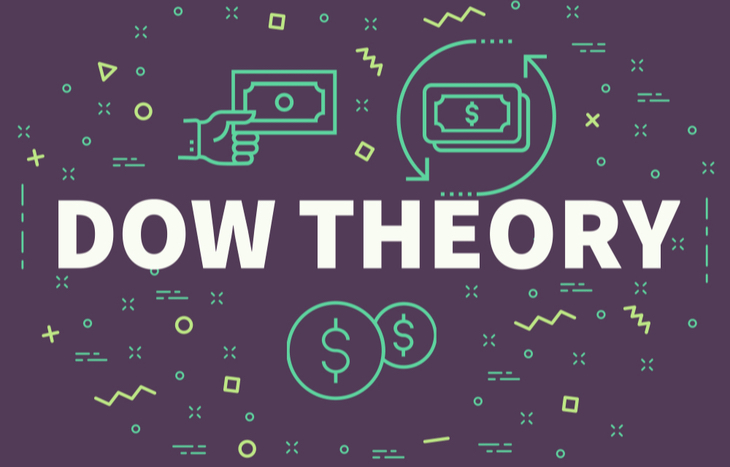 What is the Dow Theory?

With stocks having such a rough year, investors are probably wondering if the Dow Theory predicts a bearish Primary Trend. Before a Primary trend, there is a Minor trend of a stock indices moving up or down for a few days. So, we’ve likely moved past a Minor bear phase.

Next is a Secondary trend of three weeks to three months of up or down stock movements. Since it is now July and stocks have moved down since the beginning of the year, a Secondary trend is likely. However, there is much more needed to confirm a Primary Trend.

For instance, the Dow Theory says that multiple indices should confirm a Primary Trend in a clear upward or downward trend. The Dow Theory focused on sectors of the Dow Jones stock index. One-year and year-to-date returns of multiple sectors are down.

Finally, trading volume should confirm the arrival of a Primary phase and the Participation phase when investors should act. If a step up in trading volume can be approved along with the other requirements, then the Dow Theory may confirm a Primary bear phase.

Since the Dow Theory tells us to hold stocks during the bullish Participation Phase, it also has similarities to a long-term buy-and-hold strategy. Remember, Primary Phases can last several years. Over time, long-term investment strategies tend to take advantage of the general upswing in stock markets. In addition, long-term plans involve fewer trades and, therefore, have the benefit of lower trading costs compared to technical trading.

By waiting to confirm a Primary phase, technical analysts may argue that Dow Theorists missed part of the bull market by waiting. On the other hand, by subscribing to the Dow Theory, investors will also ignore Secondary phases that do not move to Primary phases. Thereby avoiding losses.

Like any other investment strategy, the Dow Theory is just that… a theory. Though it has many thoughtful tenets and may have produced handsome returns for investors over the years, there is no guarantee it will work indefinitely.