Editor’s Note: Oil prices may have dropped – but when it comes to global production, it’s full steam ahead. This creates an unprecedented environment for today’s investors.

And there’s no one better to unpack this “perfect storm for oil” than new Wealthy Retirement Contributing Analyst Jody Chudley.

Jody is an accountant with two decades of experience in international banking and analysis. With an income focus and a contrarian spin, Jody fits right in with our philosophy – and we can’t wait to hear more of his insight.

Please join us in welcoming him to Wealthy Retirement. And read on below for his take on how this historic moment may boil down to the fallout of a two-man feud…

There may not be much good news coming from the recent market turmoil, but there is at least one bright spot…

The monthly cost of filling your car with gasoline is headed way down!

This cost-of-living subsidy is being provided to Americans from the most unlikely of sources – two of the most powerful (and notorious) men on the planet.

Let’s dig into the colorful details…

A Historic Day in the Global Oil Markets

On Monday March 9, the price of West Texas Intermediate (WTI) oil dropped by more than $10 per barrel. At one point, WTI was down more than an astounding 30% on the day.

That isn’t just a bad day in the oil markets, folks.

That is historic – virtually unprecedented. 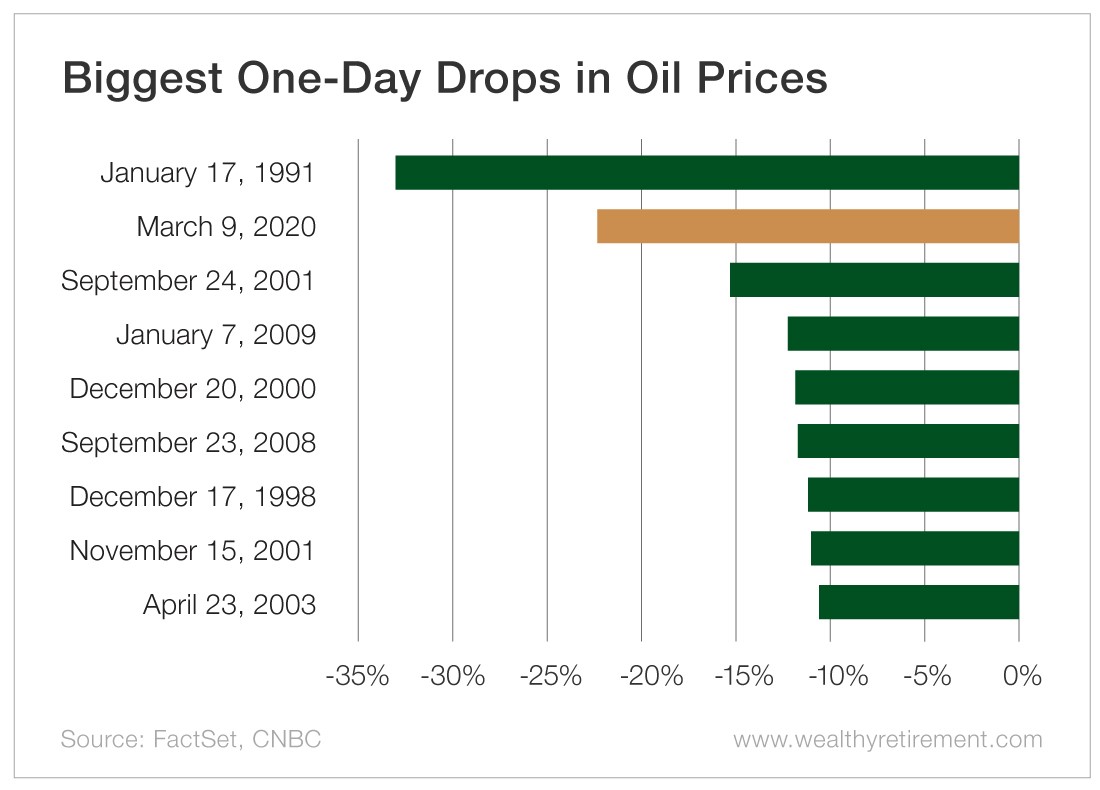 Only once before has oil dropped more on a percentage basis in a day. That was in 1991, when the price of oil gave back much of what it had previously gained after spiking on the Iraqi invasion of Kuwait.

This time around, the drop was not a reaction to a spike – this collapse was following a six-week period where WTI had already declined by 33%. 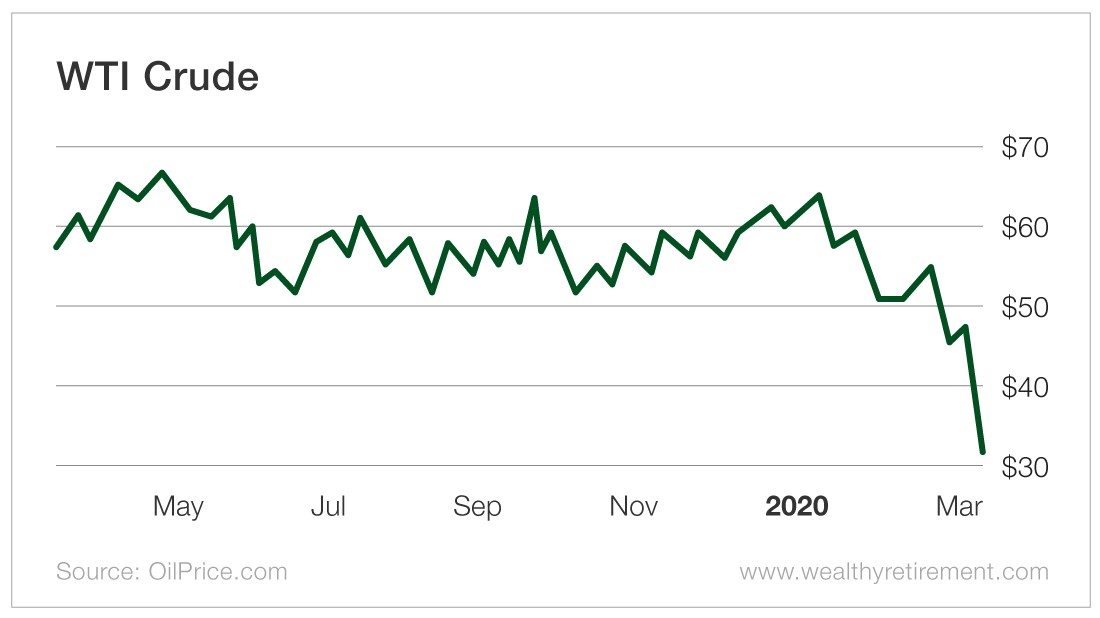 Just two months ago, WTI traded for more than $60 per barrel. After the Monday, March 9, collapse, WTI was barely holding on at $30 per barrel… a 50% haircut in two months.

The driving force behind this collapse?

Nothing less than the perfect storm for oil prices.

Oil’s Gut Punch No. 1: The Worst Ever Fall in Global Oil Demand

The impact of the coronavirus on the Chinese economy has been brutal.

The entire country has ground to a halt as the Chinese government attempts to bring the virus under control.

Based on the headlines we’d been reading, we all knew that the Chinese economy had slowed.

But the shocking degree to which it had slowed wasn’t really revealed until oil market data watchdogs like IHS Markit started publishing their first quarter global oil demand estimates.

Are you ready for it?

IHS Markit believes that global oil demand in the first quarter is down 3.8 million barrels per day.

In the words of Jim Burkhard, IHS Markit head of oil markets, “This is a sudden, instant demand shock – and the scale of the decline is unprecedented.”

Over the course of three months, that is more than 340 million barrels of oil that will have not been consumed and will have flooded into global storage facilities.

For perspective, consider that never in history has oil demand fallen this much, this fast. Not even at the depths of the global financial crisis.

No wonder the price of crude has been sinking for weeks…

Which is why nobody expected what came next.

Oil’s Gut Punch No. 2: The Corrupt Prince and the Ruthless Dictator

So a decline of 3.8 million barrels per day is really a curveball for the oil markets.

In response to this big oil demand decline, the OPEC cartel arranged a meeting with its delegates and mega-producer Russia. The intent of the meeting was to provide badly needed production cuts to help balance the market and support oil prices.

No surprise there – this is what usually happens when the oil price sinks.

But this time, President Putin said “no more” – and the OPEC meeting was done before it even began.

No cuts – no support for oil prices.

It is impossible to say exactly why Putin made this decision. Ruthless dictators tend to think differently than the rest of us. The common line of thinking is that he did it to punish American shale producers who are going to be in deep trouble with oil prices this low.

And when Putin turned his back on OPEC and the Saudis, it did not go over well.

After being rebuked by Russia at the OPEC meeting, Saudi Arabia’s young Prince Mohammed bin Salman went on the offensive. Bin Salman is no shrinking violet himself – just ask the people living in Yemen, where the Prince’s war has created the worst humanitarian crisis on the planet.

Russia’s response to that? Putin’s Ministry of Finance said that Russia could withstand 10 years of prices at $25 to $30 a barrel. Which would suggest it is ready to dig in for the long haul.

To be clear, these two gentlemen are unpredictable – so I offer no guarantees. But for now, it looks like the cost of driving is going to stay low for quite some time.