After a 30-year run, Chesapeake Energy has declared bankruptcy. Common shareholders are going to get nothing… or next to nothing.

It is a sad demise for what was once one of the most exciting companies in the market.

From the very start (and until the very end), Chesapeake had been the poster boy for the natural-gas-from-shale revolution… roaring out of the gate and whimpering to the finish. 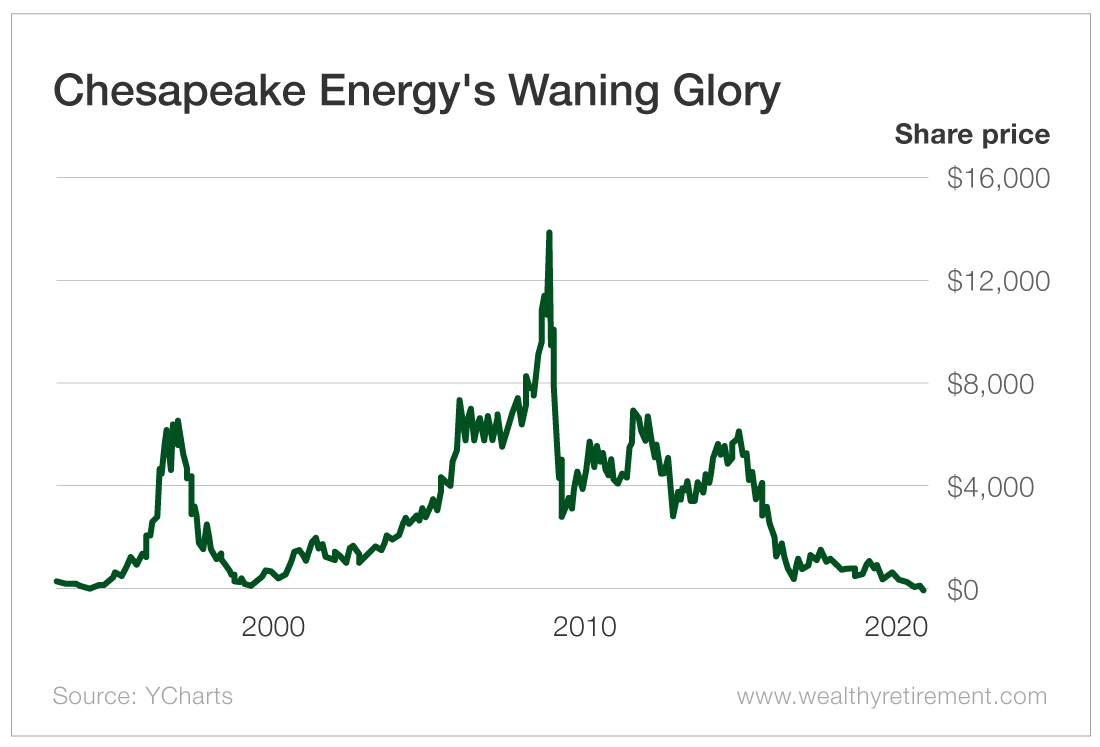 Shale gas started with so much promise for growth, but it has turned into one of the worst stories of shareholder wealth destruction in history.

I’ve watched Chesapeake and the shale boom closely from the very beginning, and there are lessons to be learned…

And They Call This Man “The Maestro”?

The year was 2003, and Alan Greenspan, the man they called “the maestro” for his ability to maneuver monetary policy, was blessing us with his wisdom…

(Yes, the same “maestro” who had just presided over the horrific dot-com bubble and would later help create an even larger housing bubble…)

In 2003, Mr. Greenspan was educating us on natural gas, a commodity he was certain the United States was desperately short on.

Greenspan was so concerned about natural gas that he went before Congress to urge that the country immediately look into importing liquefied natural gas to avoid major shortages.

He could not have been more wrong…

As Greenspan was sounding the alarm on a shortage, entrepreneurs in the American oil and gas business were cracking the code on a new source of natural gas that would unlock a massive wave of supply.

The industry had always known that natural gas (and oil) were trapped inside of shale. The problem was that until horizontal drilling and fracking were combined, those hydrocarbons could not be produced profitably.

With the code cracked on shale, the American drillers unleashed a torrent of natural gas production… 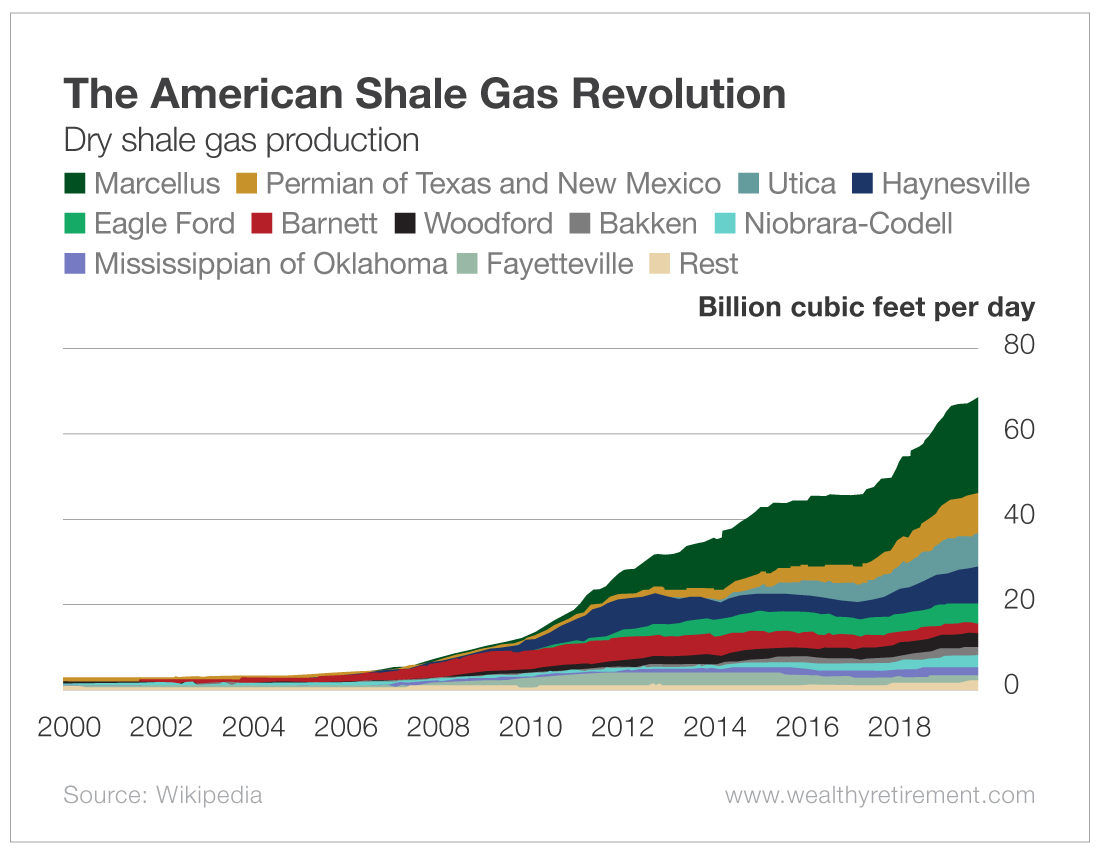 At the turn of the 21st century, the United States produced virtually no natural gas from shale.

Last year, an astounding 25.28 trillion cubic feet of shale gas was produced in the country, representing 75% of the total natural gas that was produced.

Instead of warning Congress that we were facing a natural gas shortage, Alan Greenspan should have been telling those representatives that the country would soon be swimming in the stuff…

In the Commodities Business, You Can Definitely Be Too Successful

From the start, Chesapeake Energy was unquestionably the leader of the pack in the shale gas charge.

Led by charismatic CEO Aubrey McClendon (a story unto himself), Chesapeake accumulated more shale acreage than anyone else and ramped up production at an incredible pace.

But remember how I said that we had always known that natural gas was trapped inside of shale, but we just couldn’t profitably get it out?

Well, funded by hundreds of billions of dollars of debt and equity, the shale industry was able to forget about the profitability part…

Investment banks just kept handing shale producers cash, and shale companies did what they do best: drill, drill and drill some more.

At that price, shale gas production was profitable.

But most shale gas over the past 10 years has instead been sold at a commodity price that’s less than half of that. Today, the commodity trades for less than $2 per million cubic feet.

At these prices, with soaring production, shale producers have burned through an absurd amount of cash. The industry has cumulatively spent almost $350 billion more than the cash that its production has generated. 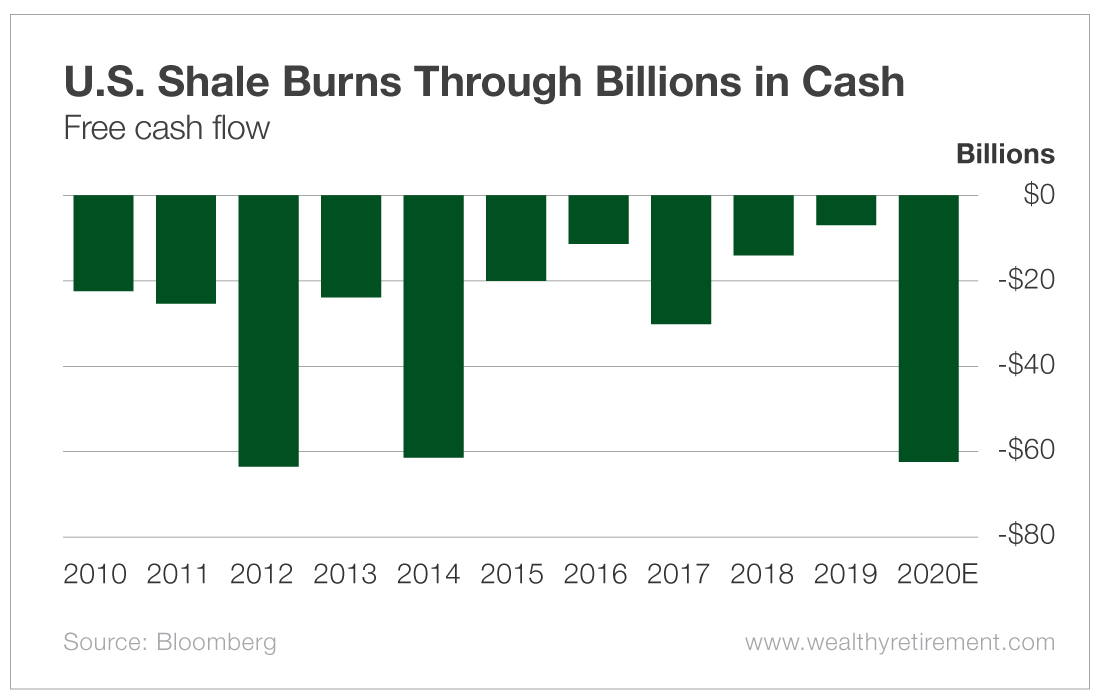 The financial markets were willing to lend shale drillers like Chesapeake billions upon billions of dollars to keep drilling.

When Wall Street turned off the tap, these companies were forced to try to make a go of it off the cash their businesses generated… and of course, they couldn’t.

With balance sheets loaded with debt from years and years of borrowing, they didn’t stand a chance.

As a result, shale gas operators that have always borrowed aggressively, like Chesapeake, are failing and leaving shareholders empty-handed.

This industry has been a victim of its own success. Excessive production growth killed the price of the commodity, and a lack of financial discipline kept companies spending when they should have been throttling back.

The lesson for investors: Cash flow matters, and debt kills.

Chesapeake had too much of the bad one (debt) and not nearly enough of the good one (cash flow). Rarely has a company worked so hard and yet accomplished so little.