The basic idea behind “Don’t fight the Fed” is that you should buy stocks when the Federal Reserve is “easing” (keeping monetary conditions loose).

And this has been fantastic advice for the last decade. We’ve been in one of the longest sustained periods of easy money in history. The stock market has gone almost straight up.

Now some people are starting to say this situation can last… forever. For example, Bob Prince, one of the top executives at Bridgewater (the biggest hedge fund in the world), was recently interviewed at the World Economic Forum in Davos, Switzerland. When discussing how the Federal Reserve tried to hike rates in late 2018, failed and reversed course, Prince said the following (emphasis mine):

But I think lessons were learned from that and I think it was really a marker that we’ve probably seen the end of the boom-bust cycle.

So he’s saying the Fed “learned” that if it tries to raise interest rates, the market goes down. So it’s not going to raise rates… ever? And Prince appears to think that this means the boom can continue indefinitely. He’s caught up in the bubble… but he may be onto something here.

Bull markets can’t go on forever, of course. But history shows us that they can go up sharply before they crash.

In the mid-to-late 1990s, the U.S. stock market was on a historic run. Tech stocks were starting to go “parabolic” (straight up).

Yet by the fall of 1998, economic growth was starting to top out. To get things going again, the Federal Reserve shocked everyone by lowering interest rates three times in a few short months. Here’s CNN reporting about the second cut in October 1998 (emphasis mine):

As news of the rate cut hit the floor of the New York Stock Exchange, traders actually cheered and investors rushed to buy stocks and bonds. 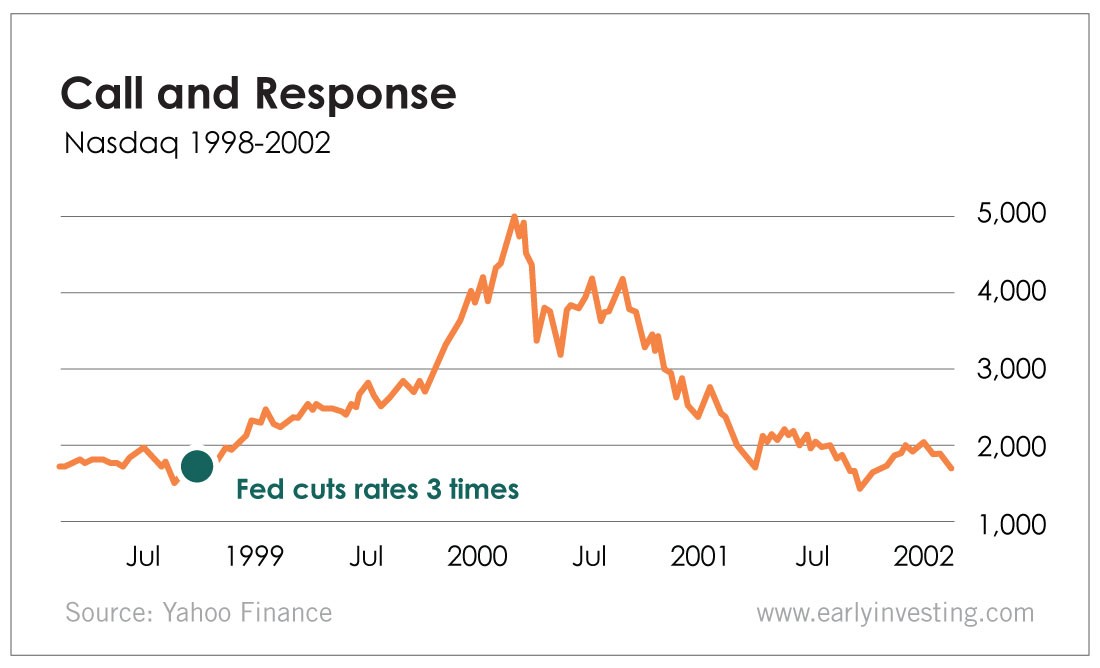 So, yes, the Fed is juicing the market higher. And judging from history, this bull market could go on for quite a bit longer. But in the very long run, prices are likely to drop dramatically. Don’t buy into this theory that the market can go up forever. It never does.

Stocks can, however, go up a long time. So if you’re trying to time the U.S. markets, I recommend holding and using a stop loss of 25% or so.

Whenever the market does crash, the Fed will likely respond with even more force, printing more money and lowering rates even more.

It’s a printing megacycle. And eventually, I think it will cause serious inflation. I’m confident this is how we will get rid of our debt problem. Paying it off responsibly isn’t even an option. (I wrote more on that here.)

Inflation will run rampant, but it’ll be disguised by “gains” in things like the stock market.

The boom-bust cycle will be alive and well. It will just be in a slightly unique form.