Don’t count on the Fed.

Over the past few decades, investors and markets have come to view the Federal Reserve as a sort of economic superhero, wielding its mighty interest rate hammer to beat back market corrections, recessions, the effects of trade wars and various other economic bogeymen.

During the 2008 financial crisis and the Great Recession that followed, the Fed stepped in with bank bailouts and 0% interest rates. When those proved inadequate to the task, it began pumping trillions of dollars of new money into the economy via a strategy called quantitative easing.

To be fair, the Fed probably did save the economy from a fate much worse than the 18-month recession and the 48% plunge in the S&P 500 we went through. The folks in Foggy Bottom come in for a lot of criticism, but I truly believe that if they hadn’t stepped in with massive injections of liquidity, the U.S. economy would have ground to a near standstill.

But superheroes grow old and feeble, too. The Fed’s once-awesome magic – much like that of the Winter Warlock in Santa Claus Is Comin’ to Town – has dwindled to the equivalent of a couple of card tricks and a handful of magic feed corn.

And lately, the Fed’s rate cuts – once anticipated by markets like they were magnitude 8 earthquakes – produce barely a tremor.

Or worse, they have the opposite of the desired effect. The Fed’s quarter-point cut last week was meant to boost economic confidence among investors and consumers. Instead, it sent the Dow down 170 points, or about 0.6%.

Market strategists are now warning investors that many major central banks around the world – the Fed included – have waning power to spur economic growth.

That’s partly because target interest rates set by these central banks are already at or below zero. It’s also because markets have become addicted to ultra-low interest rates and – like junkies jonesing for a fix – can’t stop craving more.

The stock market fell last week after the Fed’s rate cut, in part because Chairman Jerome Powell didn’t sound “dovish” enough in comments he made after the cut. (“Doves” love easy money via low interest rates, while “hawks” push for higher rates.)

So, the Fed – like most other central banks – is just about out of ammunition. Should another economic downturn ensue, Powell & Co. won’t have much power to intervene.

But don’t take it from me. Former Fed Vice Chairman Stanley Fischer co-authored a recent paper saying that “monetary policy is almost exhausted as global interest rates plunge towards zero or below.” He also wrote that “there is not enough monetary policy space to deal with the next downturn.”

With monetary policy verging on utter impotence, Fischer and many others are calling on governments to intervene with fiscal policy. That means tax cuts and spending programs. Those can be more effective than low interest rates in getting money directly into the hands of people and businesses. 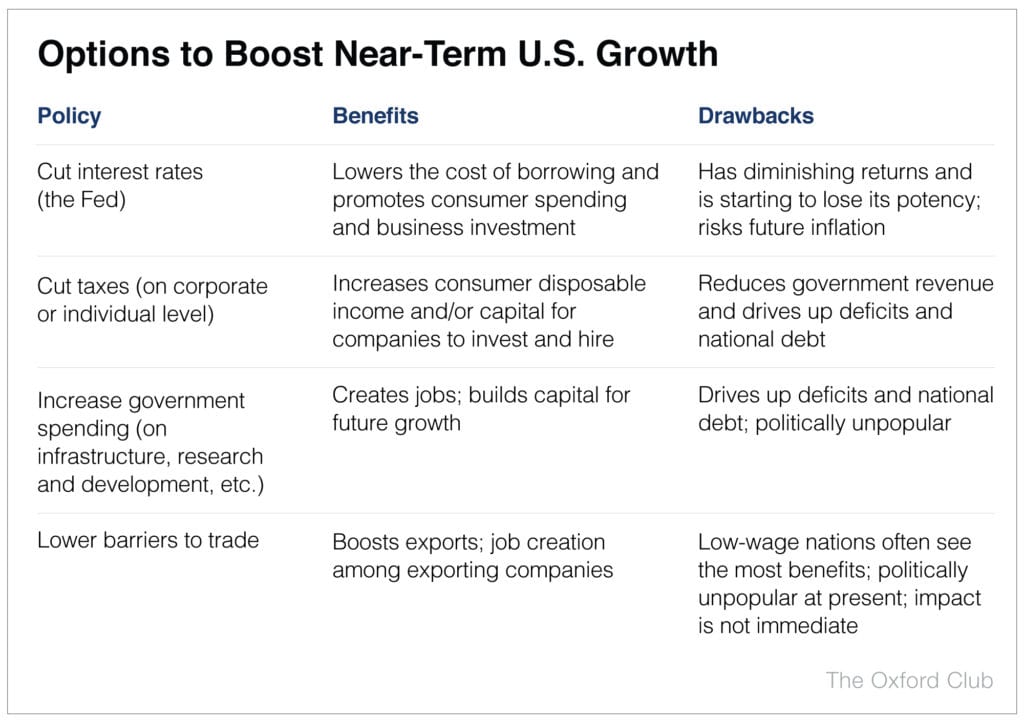 So, will the government step in when the Fed falls short? Well, doing so requires money. The Congressional Budget Office says the budget deficit this year (that’s how much federal spending exceeds money the government takes in) will be about $960 billion. And it will rise – significantly – from there, to average $1.2 trillion each year from 2020 to 2029.

I’ll let you be the judge of whether or not Uncle Sam has the means to step in with large tax cuts or spending programs in the event of a recession.

The prevailing economic evidence does not indicate that a recession is near.

But no expansion lasts forever. Something will eventually knock this one down. The problem – for households, businesses and investors – is that there may be no one around to help it back up.

Commodities Are Becoming a Hot Commodity