“You never know who’s been swimming naked until the tide goes out.”

A rock star among business school academics, Christensen coined the phrase “disruptive innovation” in the mid-1990s.

The phrase refers to when a smaller company with fewer resources shakes up an industry. By delivering a groundbreaking product or service, it causes incumbent giants to stumble.

After all, they combine novelty, a compelling story and the prospect of endless riches.

Yet you should be cautious before betting big on any disruptive technology.

Yes, if you get it right, you’ll make a fortune. But get it wrong… and you’ll likely lose your shirt.

The term disruptive innovation is no different.

As David Landes in Harvard’s history department could have told Christensen, the idea of disruptive innovation is hardly new.

After all, technological change has driven economic history since the Industrial Revolution.

Just consider the history of the United States.

Railroads in the 1860s, automobiles in the 1910s and airplanes in the 1920s all disrupted transportation.

The telegraph in the 1840s, radio in the 1920s and television in the 1930s all disrupted communications.

These disruptive technologies transformed the daily lives of tens of millions of Americans. Today’s disruptors continue a long-established historical pattern.

We don’t see the fortunes lost by investors who bet on the wrong companies, the wrong technologies or the wrong entrepreneurs.

First, disruptive technologies upend the rules of the investing game.

Just consider the fate of one of Warren Buffett’s favorite industries: newspapers.

For many decades, major newspapers offered a local monopoly on the advertising business. This monopoly ensured the steady, dependable growth Buffett craved. 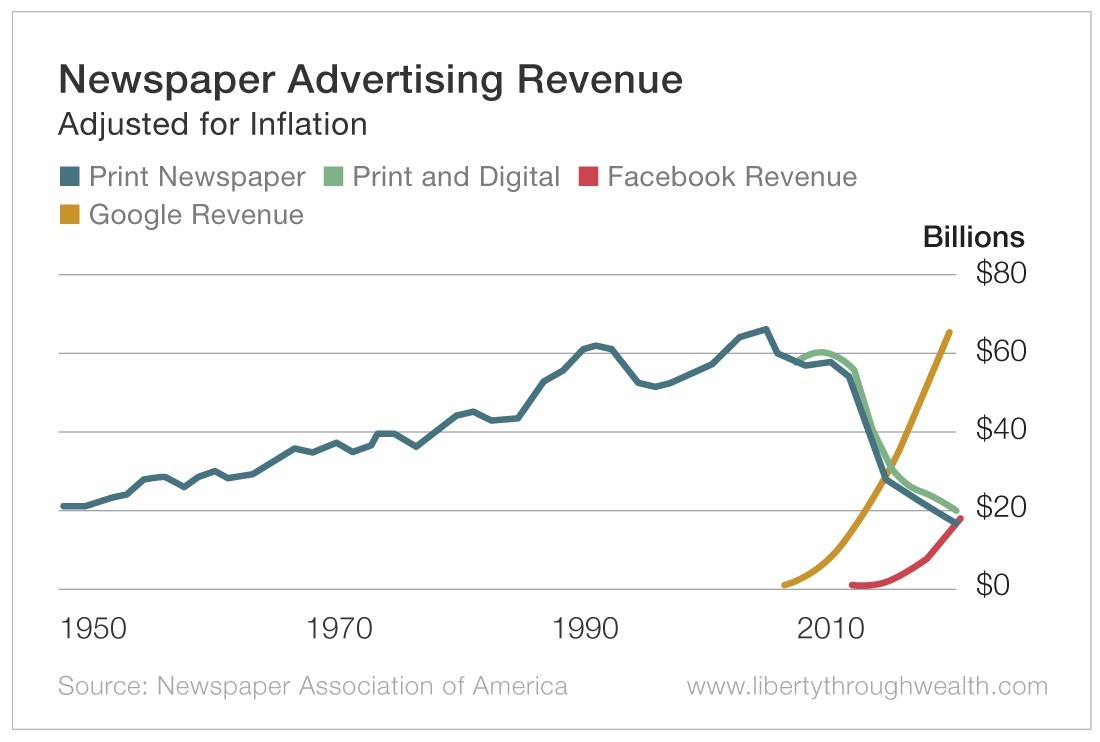 Then two disruptors entered the fray: Google and Facebook.

The chart above confirms a recurring pattern. It can take years for a disruptive technology to take hold. But when it does, the results are dramatic.

Eventually, Buffett threw in the towel and exited the newspaper business.

And today, both Google and Facebook are worth more than Buffett’s Berkshire Hathaway.

Second, you can identify the winners only with the benefit of hindsight.

And contrary to the tenets of disruptive technology, the brash, new upstart does not always prevail.

Take the example of Microsoft and cloud computing.

With annual revenues of $125 billion, Microsoft is hardly a newbie. Yet the disruptive cloud now makes up a third of its business. And that segment is growing at nearly 40%.

When current CEO Satya Nadella took over in 2014, Microsoft was worth 70% more than IBM.

At a market cap of $1.32 trillion, Microsoft is now worth 11 times as much as its former rival.

The lesson? You don’t have to be a disruptive iconoclast to prevail.

And third, disruption is a fertile field for story stocks.

I’ve written about the dangers of investing in story stocks. “This time it’s different” is rarely a formula for making a fortune.

Fast-forward 12 months and WeWork has imploded spectacularly. Its value plummeted from a high of $47 billion to less than $5 billion today.

Is the Tide of Disruption Going Out?

Disruptive companies tend to crop up toward the end of a bull market.

But as WeWork and Juul confirm, a shift in market sentiment leads to stunning evaporation in value.

Not all disruptive companies are swimming naked… but most of them probably are.

When the tide of investor sentiment goes out, don’t get caught with your pants down.