Getting the Market Right: Andy Snyder on Investing in What You Know

Steve McDonald: Our guest this week is the former Editorial Director of The Oxford Club and the founder of Manward Press, Andy Snyder.

He’s here to talk about something unusual – it’s not a fundamental or a technical, which is what we normally talk about here. It’s a philosophy of investing.

It’s called “own what you know,” and I’m going to let him explain it. Welcome, Andy.

Andy Snyder: Hey, Steve, how are you?

SM: I’m great, thank you. And congratulations on your Manward Press, it looks like it’s really tearing up the track.

AS: Thank you, it’s been fantastic so far. It started as a passion project – early in the morning and late at night – and it’s blown up into something truly big.

“Own what you know.” What is it? Where did you come up with it? How does it work?

AS: Sure. It’s certainly not my idea. This is an idea that Warren Buffett has made famous. “Own what you know” is unique for us because in Manward Press we’re looking at things that enrich men’s lives.

As men, we have a unique perspective as investors. We can walk around our garages, our shops – in just our daily lives – and look at the things we’re buying. We’re all experts in certain things.

One stock that we’ve looked at recently is Home Depot (NYSE: HD). Talk about a stock that I personally know well… I joke with my wife all the time that if I don’t show up there by 10 a.m. on a Saturday, a manager is going to call me and say, “Hey, how are you doing?”

SM: I call it “the last bastion of American manhood.”

AS: Exactly. And it’s something we all know.

But there are stocks across the market just like that – that we know well. And that’s where Warren Buffett’s theory comes in. If he can’t explain it in a couple of sentences, he doesn’t invest in it.

And as men, we have a unique perspective on the market and on individual stocks.

SM: That’s fantastic. Can you give us an example, other than Home Depot, with a chart that we can show our readers how this sort of thing has worked for you in the past?

AS: Sure. Harris Corporation (NYSE: HRS) is a fantastic one. Harris is a stock that I personally know well from my experience in the law enforcement world. Harris makes radios for police and first responders… They’re also big in the military world.

So here’s a product that I know well from my background – and a lot of people probably have never heard of Harris or never used its products – but in the law enforcement world, they’re all over the place.

So I can use that experience and that knowledge to own what I know. And the stock has just been on a tear.

SM: What’s driving this? Where are the sales coming from?

AS: Sure. It’s coming from government across the board – so federal government, Trump spending on defense – but it’s also on the state and even the municipal level.

In our local county, we’re getting all-new radios. They’re getting a whole new 911 system because of this technology development, and guess who’s sponsoring that? Guess who’s the company behind that? It’s Harris.

And it’s almost a monopoly in its market. They’re investing in facilities throughout Florida and the U.S. They have fantastic contracts. Almost every week we’re seeing news of new contracts for Harris from different levels of government.

SM: Is there some place our viewers can go to learn more about this and actually apply it?

AS: Sure. Manward Press is absolutely your best bet. I know I’m a little biased, but we talk about this theory – this idea – weekly in there.

We have our triad of Liberty, Know-how and Connections, and anytime we’re talking about this theory, it ties directly into the idea of Liberty and your wealth. Go to Manward Press and check it out.

SM: That’s fantastic. “Own what you know.” I’ll be honest with you, I’ve used this myself for many years.

I bought Netflix (Nasdaq: NFLX) at $7 a share. I signed up for it, and I remember sitting there the first night, watching it, going, “This is unbelievable! I gotta own this!” And it was $7 a share when I bought it.

SM: And that’s it. Andy, thank you so much for being with us.

AS: Thank you, Steve. I appreciate it. 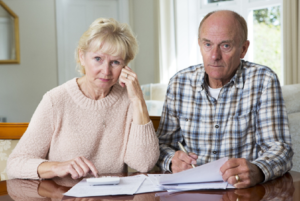