According to CNBC, defense companies have historically outperformed the broader market over the six months following a crisis event in the Middle East.

According to data going back to the 1990 Gulf War, the defense sector averaged a 6.7% return after 19 separate “Middle East crisis events” over the past three decades.

This outperforms the 3.3% average return for the S&P 500 over the same time frame.

So when Middle East tensions once again flared up earlier this month – which could lead to more military action as the 2020 year progresses – I thought it would be a smart idea to look at one of the very best ways to play the entire sector.

That’s why the iShares U.S. Aerospace & Defense ETF (NYSE: ITA) will be the basis behind today’s Trade of the Day.

As a quick backdrop…

So for the foreseeable future, defense spending will remain strong.

But when it comes to choosing between expensive names such as General Dynamics, Raytheon, Northrop Grumman or even Boeing, how do you even know which stock to buy?

Well, that’s where the iShares U.S. Aerospace & Defense ETF comes in. With one simple purchase, you get them all!

Here are the ETF’s top holdings:

I admit, seeing Boeing as its No. 1 holding might seem concerning. However, the numbers speak for themselves. When it comes to performance, it doesn’t get much steadier than this…

Over the last month, the iShares U.S. Aerospace & Defense ETF has gone down 3.39%. So if you’re looking for that one small window of opportunity to get in, this might be it. 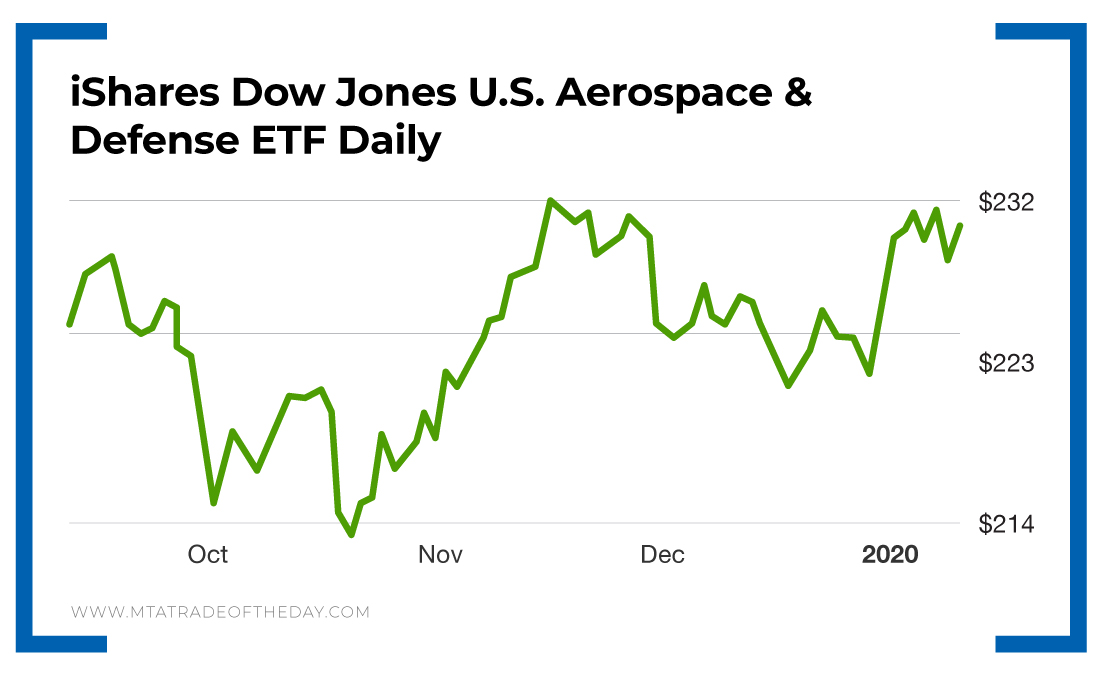 Action Plan: Because of the iShares U.S. Aerospace & Defense ETF’s track record of powerful growth going back a decade and the United States’ 2020 defense budget increase, buying shares of the ETF on this dip might be a smart way to capitalize on a new geopolitical flare-up.

If you’d like to start trading plays like this, with Pro Traders in real time, join me in The War Room today!