What are Large Cap Companies?

Market capitalization plays a big role in evaluating potential companies to invest in. Many investors—especially new investors—tend to stick with large cap companies: typically, a stock with a market cap between $10 billion and $200 billion. These are the largest public companies and tend to represent a level of stability above and beyond mid-cap and small cap stocks. They’re companies you likely know by name or interact with in a regular capacity through their products or services.

Large cap companies offer a lot of appeal to investors. Their large market capitalization brings them more than just stability—it also paves the way for opportunities such as dividends and cross-sector exposure. Here’s what investors need to know about large cap companies: their benefits and their drawbacks. 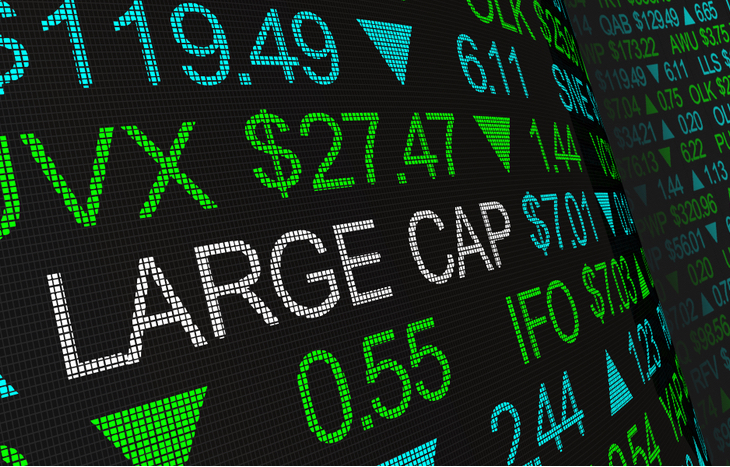 What is Market Capitalization?

For example, consider Shopify (NYSE: SHOP). In July 2021, the company’s share price was roughly $1,500 with an average of ~124 million outstanding shares, for a market cap of roughly ~$186 billion. This positions the company firmly in large cap territory.

Companies’ market capitalizations change with the ebb and flow of its share price. A stock might breach $200 billion in value, then fall below that threshold again the following week. Remember that market capitalization thresholds aren’t hard and fast—rather, they’re good guidelines for evaluating companies based on size.

Most of the well-known stocks traded regularly on the market are large cap companies. They’re household names that have a strong history of performance and a moat that allows them to remain stalwarts in their industry. Some of the most recognizable large-cap companies from various sectors include (as of September 2021):

These represent just a sample of the many actively traded today. There are, on average, 850 large cap companies traded any given month, which also accounts for companies that fall below or rise above the general large cap thresholds.

Many investors lump large cap and mega cap companies together. However, there’s increasing reason to delineate the two. As the wealth of the largest companies continues to grow, there’s a whole other scale to consider. While big cap companies traditionally push up against $200 billion as an upper valuation, we now live in a world with several trillion-dollar companies. There’s a big gap between $200 billion and $1 trillion, and it’s a distinction some investors feel compelled to make.

Here’s a look at some of the largest mega cap companies (as of September 2021). Note that they’re all tech-focused firms:

Not every investor or fund recognizes the “mega cap” moniker, and many still lump these funds into the big cap bubble. As a result, there are roughly ~40 companies that are “mega cap” that get grouped into the large cap threshold.

The Benefits of Large Cap Companies

Investors choose to put their money in large cap companies because of their stability. The chances of a company like Waste Management (NYSE: WM) or Walgreens Boots Alliance Inc. (NASDAQ: WBA) suddenly falling victim to market disruption is relatively low. In fact, many of these companies are well-established enough to offer dividend payments. All 65 dividend aristocrats are either large or mega cap companies.

Big caps are also stable: great for investors who want to invest in equities, but who are tentative when approaching growth stocks or companies with smaller market caps. Large caps are the stalwarts of the market and typically don’t move more than a percent or two during even volatile times. That said, they’re primed for continued market dominance in their respective sectors and will generally pace or beat the market average over time.

The Drawbacks of Large Cap Investments

The biggest drawback of large caps companies is that they’re already large, which leaves very little room for growth. While these companies will still grow and see higher revenues and earnings by nature, they pale in comparison to growth stocks or emerging market plays. A growth stock can net investors magnitudes of ROI over a few years, whereas big cap companies tend to do about as well as the market or slightly better.

Outside of dividend plays, they don’t tend to offer a lot of appeal to aggressive investors. And, if that dividend disappears, the investment becomes an anchor in portfolios: just ask General Electric (NYSE: GE) or Ford Motor Company (NYSE: F)—both large cap companies that slashed dividends in recent years (and suffered because of it).

Large cap companies play a very important role in the stock market. In cap-weight indices like the S&P 500, these companies provide a strong foundation for stability and tremendous earnings that keep the market buoyant. While they don’t offer the returns of growth stocks, they offer the promise of proven performance and the toehold investors are looking for in specific sectors. If you’re risk averse or looking for a strong dividend play, it’s difficult to beat a portfolio filled with big caps.

Making smart investment decisions can help you gain financial freedom in your life. For the latest stock picks and large cap analysis, sign up for the Trade of the Day e-letter below!