Luckin Coffee (Nasdaq: LK) may not be as well-known in America as Starbucks (Nasdaq: SBUX). But in China, the “Little Blue Cup,” as it is affectionately known, is huge. Or should I say it’s venti? But even in America, investors in Luckin Coffee stock know the brand well.

In fact, Luckin Coffee now has more coffee stores in China than Starbucks by several hundred. And until this week, it may have seemed poised to dominate Starbucks as China’s coffee of choice for the foreseeable future.

But after some nasty headlines about accounting fraud at the company this past week, Luckin Coffee stock took a major tumble. Is the future of the company in jeopardy? Or is now a better buying opportunity than ever? 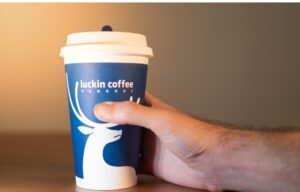 Luckin Coffee was founded in 2017 by Jenny Qian Zhiya and Charles Zhengyao Lu. And just three years later, it has grown into a Chinese coffee behemoth.

By October 2018, Luckin Coffee had already opened 1,300 stores. This made it the second-largest purveyor of coffee in China by number of stores, second only to Starbucks.

But it’s no longer playing second fiddle to the big Seattle mermaid. Whereas Starbucks currently has 4,200 stores in China, Luckin has 4,507 as of January.

How was Luckin Coffee able to grow so quickly? Through aggressive marketing spending. In fact, the company spent nearly 3X as much on marketing as it was earning in its formative years.

And what has been responsible for the company’s massive success in China?  Well, it would depend on who you ask.

According to Luckin Coffee, its success is owed to its innovative use of technology to track customer data and predict customer behavior.

Though many would simply point to Luckin’s pricing structure. The company generally charges between five and ten Chinese yuan less per cup of coffee than Starbucks.

Another way Luckin Coffee has been able to grow so exponentially was by signing a strategic partnership with Tencent Holdings.

Tencent is a holding company in China and a major powerhouse there in things like tech, artificial intelligence and more.

Luckin Coffee went from 0 locations to 4,500 locations in China in … 2 years.

No one could understand that growth.

Well, apparently faking the numbers is how you do that. pic.twitter.com/SapoPXhTvx

Luckin Coffee has been in the news quite a bit this week. This is due to the recent allegations of fraud committed by several individuals at the company. They include its chief operating officer.

On April 2, Luckin Coffee announced that an internal investigation may have uncovered as much as 2.2 billion yuan worth of fabricated sales. This translates to about $310 million.

The alleged perpetrators of the fraud are several employees, including the company’s COO, Jian Liu. These employees have been suspended pending further investigation.

Luckin Coffee has created a special committee to investigate the matter further. Meanwhile, it has issued statements on social media apologizing for the fraud and promising to make up for the lost sales.

Although the stock regained a bit of value at first, climbing to $9.63 on Thursday, it then slowly declined back toward $4. It closed at $4.39 yesterday.

While revenue has seen strong growth over the last year, finding profitability has so far been a problem. The firm recorded sales of $1.54 billion in Q4 of 2019, but at a loss of nearly $532 million.

Adjusting for the accounting fraud will make the earnings loss even more pronounced. As Luckin’s stock price is largely a function of its tremendous revenue growth rather than present income, it has had an outsized impact on the price of the stock.

And then a few days ago, Luckin Coffee announced that their internal investigations found that the COO and others fabricated transactions to boost revenue in 2019 by $300M.

The stock immediately dropped by over 80%. Wild. pic.twitter.com/mubSvmZbQU

Obviously, this has been a rough week for Luckin Coffee’s stock. The question becomes: What should you do about it?

The truth is that it depends on your view of the company’s fundamental business. Yes, Luckin Coffee is taking a significant financial hit, which has devastated its stock price.

And it’s possible that the internal investigation led by the special committee could turn up more irregularities to damage the price even further.

The question becomes: Is the company’s business model fundamentally sound?

In recent news, we’ve seen a lot of companies focus on rampant growth at the expense of profitability. This has proven devastating in the long run to some major companies. Just see the recent WeWork debacle.

As more companies – Uber is another example – find that unsustainable growth may not be the best long-term strategy for startups, IPOs and other young firms, investors have good reason to be wary of Luckin Coffee and its stock.

At the end of the day, Luckin Coffee’s business is coffee.  Not some blockbuster new drug. Not a revolutionary tech innovation that will change the way we live. It’s not even some novel new product in entertainment services.

It’s coffee. Sure, the company leverages tech to deliver the product in new and convenient ways. It relies heavily on marketing to get the word out and feed growth. And it does make use of customer data collection to optimize its processes.

But is all this ultimately enough to reign supreme over Starbucks and other competitors in the Chinese coffee market space? That remains to be seen.

Concluding Thoughts on the Stock

At the end of the day, investment decisions always come back to the fundamentals. Does the company have an airtight business model? How is it performing financially? And does the current stock price accurately reflect these underlying components?

Luckin Coffee has significant issues that can impact it in the short term and the long term. And in truth, it may never fully recover from this latest shocking scandal.

On the other hand, the fundamental business model of Luckin Coffee hasn’t changed. So if you were in love with that business model before, you should still be in love with it now. And if you’re right, you suddenly find yourself eyeing the stock at bargain-basement prices.

Regardless, investing in Luckin Coffee stock isn’t the safest play right now, even in the discount bin. If you’re looking for safer options in this turbulent market, Investment U is chock-full of great ideas where you can park your money more safely.

To find out more about what those are, sign up for our free daily Investment U e-letter by entering your email address in the subscription box below.

Nobody knows for sure what the future of Luckin Coffee stock is. If the company can fix its significant problems, it could have lasting long-term success. But if not, this is a brew that may turn bitter for its investors in the end.