An Oatly IPO is filed with the SEC. Earlier this year, investors speculated about whether or not the Oprah-backed company would go public. Now it looks like Oatly stock is officially coming to market.

But is Oatly a good investment opportunity? Here’s what we know… 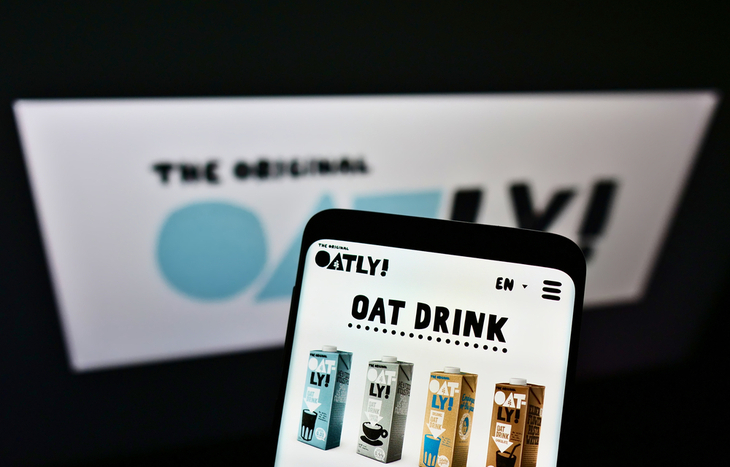 Oatly boasts that it’s the original and largest oat milk company. Rickard Öste founded the company in 1994, giving it a 27-year history. Headquartered in Malmö, Sweden, Oatly uses 1990s research from Lund University. It also has a patent for its enzyme technology. Oatly uses oats to produce milk, ice cream, yogurt and more.

The company’s Production & Development Center is in Landskrona, Sweden. Oatly also recently built a new plant in New Jersey. Costing $15 million, the U.S. plant produces 750,000 gallons a day of oat base. Additionally, Oatly announced it’s going to build one of the world’s largest factories in Peterborough, U.K. The company plans to build factories across Europe, Asia and the U.S.

Lastly, Oatly has some big names to back it up. These include Oprah Winfrey, a well-known supporter of healthy and nutritious diets, and investors such as Blackstone Group (NYSE: BX). But nutrition isn’t the only thing Oatly is boasting about in its IPO prospectus. The company is also taking an environmentally friendly approach to its stock offering.

One of the biggest highlights from the Oatly IPO prospectus is the company’s focus on environmental impact. Oatly states that…

Traditional food production is one of the biggest drivers of environmental impact. Food production uses about half of all habitable land on earth, requires large amounts of resources, emits greenhouse gases and harms biodiversity. At the same time, today’s food system – and often our eating habits – does not meet our nutritional needs, driving the prevalence of non-communicable diseases like malnutrition, obesity and heart and vascular diseases. Through our products and actions as a company, we work to grow the plant-based movement and help people shift from traditional dairy to plant-based products and enact positive societal and industry change.

According to the prospectus, consuming a liter of an Oatly product compared with a liter of ordinary cow’s milk results in about 80% fewer greenhouse gas emissions, 79% less land use and 60% less energy use.

Oatly already has a global presence. It offers its products across 20 markets. Oatly also uses multiple channels, including retail, food service and e-commerce. As of December 31, 2020, the company’s products were offered in about 60,000 retail stores and 32,200 coffee shops. Oatly has partnerships with companies such as Starbucks (Nasdaq: SBUX) and Target (NYSE: TGT).

The company plans to continue its expansion. It uses a food service-led strategy. This means Oatly will use places like coffee shops to build brand awareness through the specialty coffee market. Oatly found the strategy successful in the United Kingdom, the U.S., Germany and China.

Oatly goes on to give 2020 statistics about its global presence. Here are some highlights…

Oatly is undoubtedly a household name in the nondairy market. And that can make Oatly stock look like a good opportunity. But that last bullet takes us to a very important part of understanding the Oatly IPO: finances.

Some investors are concerned after seeing the prospectus. That’s because Oatly’s financial data doesn’t show that the company is profitable. Instead, Oatly has losses for both years. In 2019, loss for the year totaled $35.6 million. And in 2020, it grew 70% to $60.4 million.

However, the IPO market in 2020 showed that investors aren’t looking at profitability as much as they used to. As more startups go public earlier in the companies’ lives, more IPOs are companies without profit. Additionally, Oatly’s cash and equivalents increased from $10.6 million in 2019 to $105.4 million in 2020.

Oatly believes the world is turning more toward nondairy products, and that global adoption is only beginning. To get better insight on the company’s finances and market opportunities, you can check out the Oatly IPO prospectus. And for those interested in Oatly stock, let’s look at the details.

On February 23, Oatly announced that it had confidentially filed with the SEC. The company didn’t give any information about pricing, share number or offering date at the time. But the filing is now public, so we have a little more information.

Are you looking for the latest investment opportunities? Then Investment U is the place to be! Sign up for our free e-letter to receive tips and research from investing experts. Whether you’re a beginner or an experienced investor, there’s something for everyone. And if IPO investing interests you, check out our IPO Calendar to stay up-to-date on the market’s latest offerings.

Oatly stock is filed to trade on the Nasdaq under the ticker symbol OTLY. Unfortunately, the Oatly IPO price, date and share number are still unknown. However, the SEC states that companies that file confidentially must make the filing public no fewer than 15 days before the IPO. That means the Oatly IPO date could be sometime after May 4.