For the last several months, world oil markets have taken it on the chin.

But the hurt is just getting started…

In the exploration and production (E&P) space, cash flow is king.

And that’s exactly what an increasing number of E&P companies are doing. When oil briefly traded below $0 per barrel a few weeks ago, a number of big E&P operators like Whiting Petroleum Corp. (NYSE: WLL) threw in the towel.

Prices have since recovered and are now trading north of $20 per barrel. But for E&P companies, that price is still a nightmare.

No E&P company in the U.S. can turn a profit selling oil at these prices. You can’t “make it up on volume,” as the old saying goes.

The bankruptcies we’ve seen so far are likely just the tip of the iceberg. According to Rystad Energy, if oil continues to trade around $20 per barrel, as many as 533 U.S. E&P companies could go bankrupt by the end of next year.

And if oil starts trading in the teens, the number of bankruptcies could double. Essentially, any E&P company that has debt (and most E&P companies do) would be at risk.

As I write this, WTI and Brent crudes are trading at $25.51 and $29.92 per barrel, respectively. Prices are holding firm at the moment.

That’s because Saudi Arabia has agreed to cut an additional 1 million barrels per day (bpd) starting in June. At this point, June production from the oil kingdom looks like it will be 7.5 million bpd.

After the Saudis announced the additional cut, oil prices barely budged. Brent’s price initially increased 1%, but it quickly gave up those gains.

Prices are still down by more than 50% since January. Even Saudi Arabia is facing tremendous financial pressure.

It’s been actively campaigning to other members of OPEC+ to follow its lead and make additional voluntary production cuts. So far, the United Arab Emirates and Kuwait have agreed to additional cuts of 100,000 and 80,000 bpd, respectively.

All of these cuts should eventually bolster prices, right?

The cuts are nowhere near enough. The demand destruction that occurred several months ago was nearly double the supply cuts.

We are starting to see some minimal demand resume as some countries gingerly begin returning to normal life.

Italy, South Korea, Singapore and a number of U.S. states have lifted stay-at-home orders. People are out and about again. And they’re buying gas for their cars.

But that may be another false hope.

In those countries and in many U.S. states, the coronavirus is returning and rearing its ugly head. This will create demand destruction all over again.

In the U.S., demand is just over half of what it was before all this started…

The overall problem in the oil patch remains one of overproduction. U.S. producers are still producing too much oil.

The Will of the People Be Damned 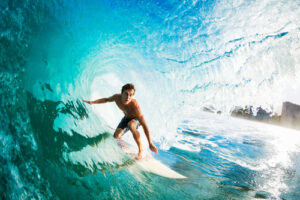 What Swing Traders and Surfers Have in Common