In 1969, a man from Tennessee named Dan Evins realized that the country’s interstate highway system was quickly expanding.

This new network of roadways was now connecting people from all over the country – allowing them to jump into the car and have access to places that were never available before.

It was an exciting time. And for Evins, it gave birth to a new, unmet market need…

You see, Evins quickly realized that families on road trips didn’t have a place to stop along the highway that offered them a quality, home-cooked meal at a fair price.

At the time, crackers were delivered to his store in old country barrels. Customers would congregate around these newly delivered barrels full of crackers to discuss the news happening that day. Some called them the “original water coolers.”

And with that, Cracker Barrel Old Country Store (Nasdaq: CBRL) was born.

Fast-forward to today and Cracker Barrel has 660 locations in 45 states across the nation. Every time I drive past a Cracker Barrel, no matter whether it’s 10 a.m. or 7 p.m., one thing is consistently true…

The parking lot is always jam-packed.

In fact, the white rocking chairs on the wooden front porch are always occupied. To me, this means one thing: Its business model is working.

Adjusted earnings came in at $2.70 per share, far better than the estimate of $2.43. Revenues of $787.1 million surpassed the consensus mark of $774 million. And the company’s bottom line increased 23.3% year over year. 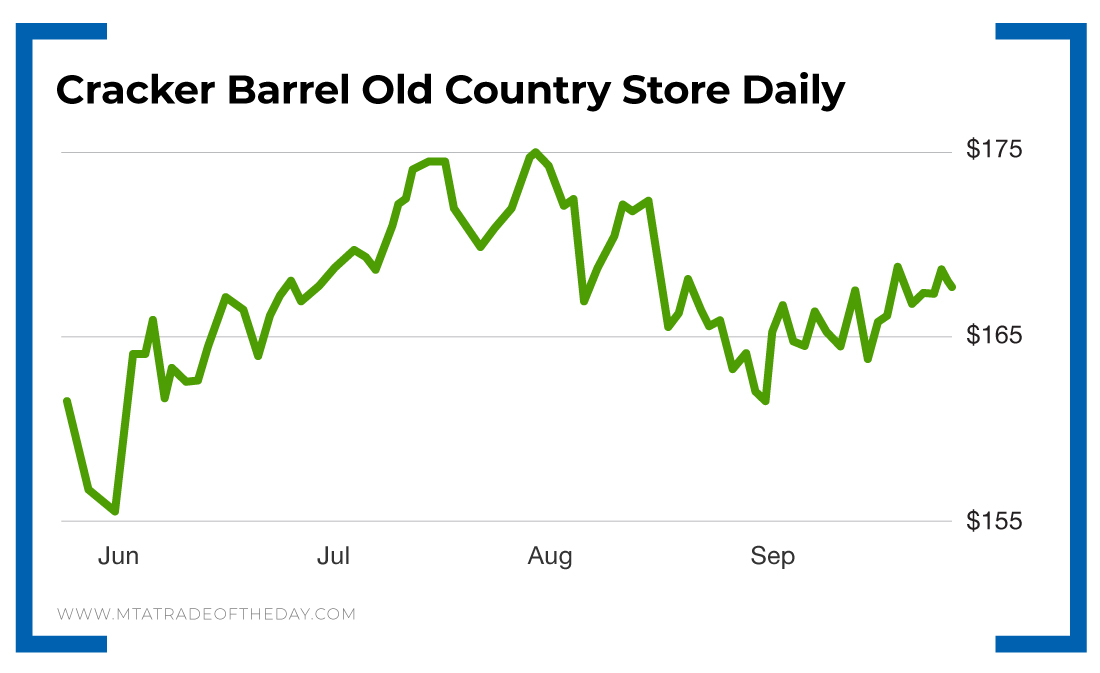 Zacks just upgraded it to a buy, saying, “This rating change essentially reflects an upward trend in earnings estimates – one of the most powerful forces impacting stock prices.”

Action Plan: In The War Room, we’re taking a medium-term approach on the homey restaurant chain and getting positioned to continue inching higher. After all, if we do enter into a recession, it’s my belief that people will not stop going out to eat but instead will scale back their restaurant choices. If that’s the case, then Cracker Barrel stands to be positioned correctly – recession or no recession.

If you’re interested in actionable advice on trading, join our free Trade of the Day e-letter.