In the biggest IPO of the year, Rivian’s stock price is now up more than 64% since it went public last week. Not only that, but Rivian’s debut was the largest since Meta (NASDAQ: FB), formerly Facebook. Pricing its IPO at $78 per share, RIVN stock is now climbing over $127 at the time of this writing.

Rivian (NASDAQ: RIVN) is an electric vehicle maker targeting the SUV/ truck market for those not familiar with the company. Or, in other words, “Electric Adventure Vehicles,” as Rivian refers to them.

The EV maker is just getting started with the first Rivian R1T truck coming off the line this quarter. But, this startup differs from others with big-time backing from industry giants Amazon (NASDAQ: AMZN) and Ford (NYSE: F).

Not to mention, Rivian’s +$120 billion market cap makes it more valuable than both GM ($91B) and Ford ($77B). If you are considering investing in Rivian stock, here’s what you should know. 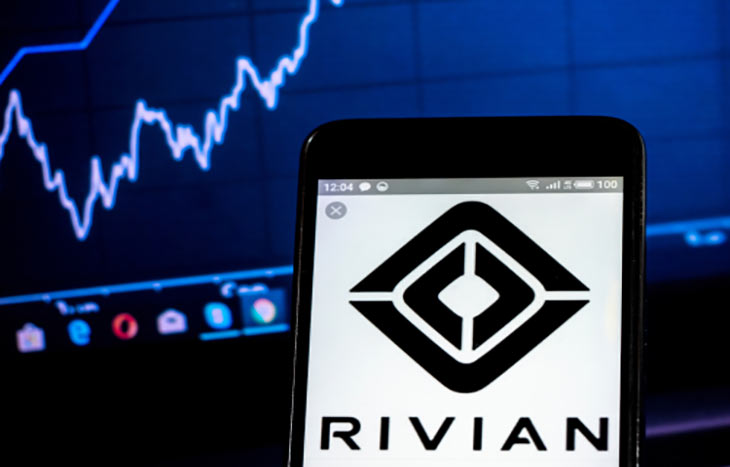 Rivian’s successful debut shouldn’t come as a surprise, given the amount of attention around the EV market right now. However, Rivian has a unique business model that can give them an advantage in the long run.

With this in mind, the EV maker currently has two models – the R1T and R1S – both available directly through Rivian’s website.

What’s more, both of Rivian’s models are built on the same platform that includes the battery pack, drive units, and suspension. The ‘skateboard platform’ will help allow Rivian to streamline the production process.

What to Expect From Rivian Stock?

Given the hype around Rivian stock right now, the EV maker has very high expectations. In fact, the entire electric vehicle industry is highly anticipated, with EV sales predicted to make up 48% of all new car sales by 2030. In contrast, EV sales are set to make up around 7% of sales this year, representing 66% growth from 2020.

As can be seen, the market opportunity is there for Rivian to Capture. But, Rivian is in one of the fastest-growing segments, with truck and SUV demand increasing. According to a new IHS report, SUV sales look to reach 50% market share (+2%), while trucks are predicted to reach 20% (+1.9%).

Although Rivian is just producing its first vehicles, it has a long way in capturing a fair portion of the growing market. Yet, Rivian already has over 55,000 preorders. And this ongoing revenue stream is a major reason Rivian’s stock price should continue to grow.

And that’s not including the 100,000 initial orders from Amazon. The company is pledging 100,000 EDV orders by 2030 to support its Climate Pledge commitment. So far, Amazon is expecting 10,000 of them to be running by next year.

All in all, Rivian’s key partnerships and growing backlog is promising for the EV startup. However, Rivian will need to show it can mass-produce its vehicles while remaining profitable in a competitive industry.

How Does Rivian Compare to Tesla?

I’ve seen Rivian being referred to as the “Tesla-killer” or something along those lines. But, the EV market opportunity is massive right now. In fact, new research points to a stunning 26.8% annual growth in global EV units in the next nine years. Will Rivian’s stock price keep pace with the market demand?

Several factors are fueling the growing demand, such as –

And it’s Tesla (NASDAQ: TSLA) enjoying much of the market growth. In fact, Tesla has been one of the most exciting growth stocks to watch over the past few years. In the past two years, Tesla stock is up over 2,000% with the growing interest in EVs.

Obviously, this isn’t a fair comparison. But, to put things into perspective, Tesla just had its full profitable year, this past year in 2020.

By the same token, it also shows how much potential there is in the EV industry. Rivian’s new models will compete with Tesla’s Model X and Cybertruck.

As can be seen, Rivian stock has very high expectations on Wall St with solid investors and big market potential. With Morgan Stanley, Goldman Sachs, and J.P Morgan acting as lead investment managers, you know just how big the stakes are…

With this in mind, global leaders are meeting as we speak to discuss how we can tackle climate change. And one of the main goals of these talks is to “speed up the switch to electric vehicles.”

Of course, Rivian has a long way to go in proving it’s a real contender or “tesla-killer,” as you would. But, with an electrifying product and firm support, Rivian might just be Tesla’s biggest rival in a few years.

Tesla’s own Elon Musk weighed in on the Rivian’s IPO, saying on Twitter, “I hope they’re able to achieve high production & breakeven cash flow. That is the true test.”

From someone who knows a thing or two about the EV industry, production ability is crucial. But, most importantly, you need the cash to continue doing business, as Elon and the Tesla team nearly ran out of few times.

For more on Rivian’s stock price growth, sign up for Profit Trends. This free e-letter is packed with the latest info on renewables, electric vehicles and more. Join today!