Robinhood Blocked GameStop Trading: Is This The End?

Before we get into the latest, let’s look back at the events that led to the meteoric rise in the price of GameStop shares. 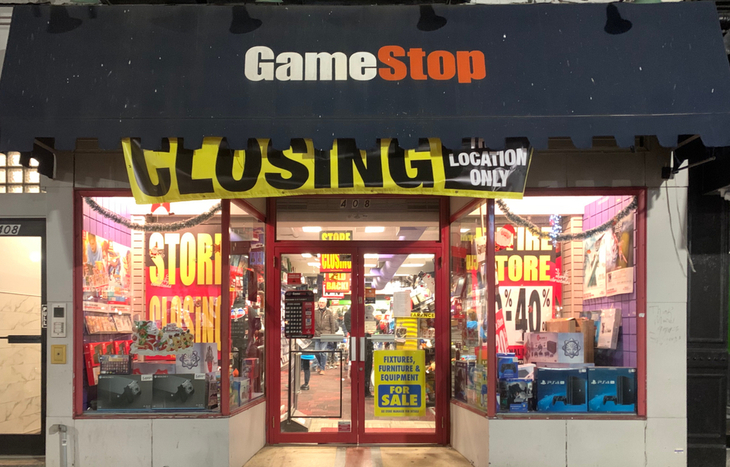 Back in December, GameStop shares tanked. The company missed Wall Street estimates for quarterly revenue. The major factors were the pandemic (fewer in-store sales) and a rise in digital downloads that circumnavigate retailers like GameStop.

Then, earlier in the month, GameStop appointed Chewy founder Ryan Cohen to its board with the hope of increasing digital sales. Some institutional investors saw the news as a step in the right direction.

The news was enough to send shares up by a whopping 84% over the next few days. At this point, GameStop shares were trading just shy of $40. And keep in mind, the median target price among analysts was just $12.50.

After having some time to chew on the news, short seller Citron Research developed a plan. Here’s the tweet that started it all:

The “suckers at this poker game” bit and cocky line about knowing short interest better than… well, anyone… got the attention of a whole lot of retail investors. And right about then is when things took a turn for the interesting.

The consensus among most institutional investors was that GameStop bringing in Ryan Cohen was grabbing the headlines and making it overvalued. And retail investors were ignoring GameStop’s poor fundamentals.

Before the Squeeze (and Long Before Robinhood Blocked GameStop)

Thus began the big short. The big guys started borrowing shares of the stock. Then they sold the shares while anticipating being able to buy them back at a later date when the share price fell. After buying them back at a discount, they’d return the borrowed shares and pocket the difference in price. At least, that was the plan…

The Monday following Citron’s tweet, GameStop’s stock had 71.2 million of its shares tangled up in short positions. To say that’s a lot would be an understatement. That’s actually more than the total number of publicly tradable shares.

Some intrepid speculators on the online Reddit forum r/WallStreetBets took notice of this piece of info. And that’s when things really started to escalate. But it didn’t exactly happen overnight. The plan was set in motion months before any of this started.

Back in September, an attention-grabbing treatise titled “Bankrupting Institutional Investors for Dummies, ft GameStop” began making the rounds. The premise was that GameStop stock had a significant amount of short exposure (again, this was way before Cohen even arrived). And retail investors could force short sellers to abandon their short positions by buying up shares and driving the price up.

All of those shorters – so the theory went – would then be forced to buy back their shares and drive up the price even more. Fast-forward a few months and those following the story have seen elements of the treatise unfold in real time.

On Monday, January 25, GameStop’s share price was up as much as 144%. The next day, retail investors continued to storm in and buy shares and call options, sending the share price up 92.7%. By the following Wednesday, the flurry of action was so severe that Citron and fellow short seller Melvin Capital were forced to close their short positions.

The massive 700% rally in share price appeared to be a win for retail investors. And resulted in a massive loss for the institutional investors. It was a classic short squeeze of unusual scale. For the time being, David beat Goliath. But the story is far from over.

Despite having an apparent victory in hand, retail investors weren’t done yet. As news of GameStop’s unbelievable rally continued, investors continued to pour in. The short sellers were forced to bail, but the action didn’t stop.

Things got so severe that popular investment app Robinhood sent out this notice to its users:

“We wanted to reach out to you in the midst of the current volatile market conditions. It’s as important as ever to be an informed investor.” 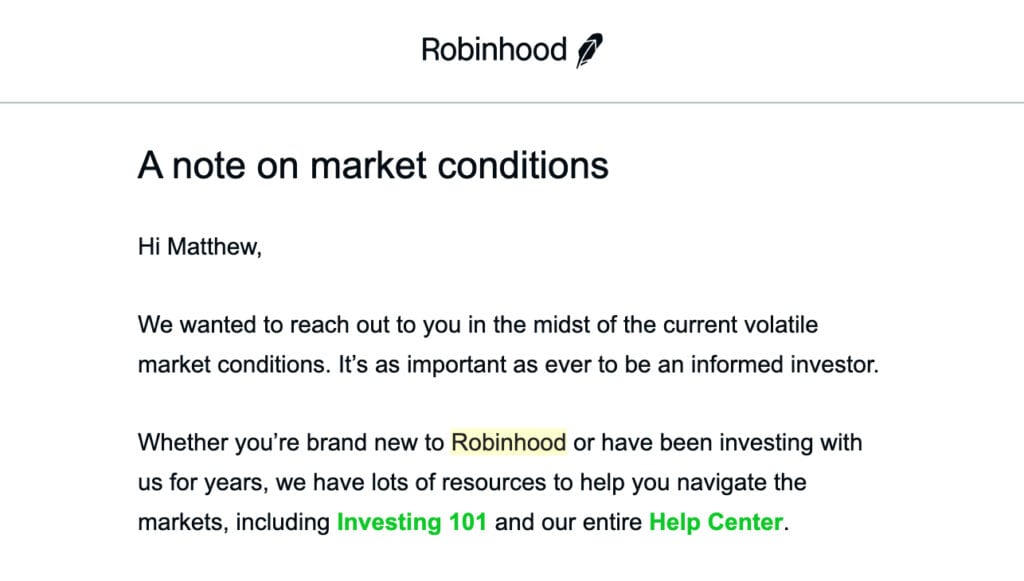 The email then went on to link to several educational investment articles. But skeptics feel this wasn’t just a note born from altruism. When volatility triggered circuit breaker events that shut down the markets four separate times back in March 2020, no such email was sent out.

Regardless, this was just a harbinger of things to come. The following day, Robinhood dropped the real news:

And just like that, Robinhood blocked GameStop trading while also putting the kibosh on AMC Entertainment (NYSE: AMC) for similar reasons. Holders could continue to hold or sell. But Robinhood put restrictions on buying new shares.

But Robinhood wasn’t the only brokerage to put a stop to trading GameStop. TD Ameritrade said it was restricting trading in GameStop. Meanwhile, Charles Schwab announced that it was tightening margin requirements on some stocks, including GameStop. And before trading closed on Thursday, Interactive Brokers announced it had put GameStop and AMC option trading (among others) into liquidation. This meant that some investors could no longer create new positions.

These actions have naturally led to falling share prices for the “off-limits” stocks. While actual demand might not be down, availability is. And when shares can be held or sold only on certain platforms, share price naturally suffers. But by almost any metric available, GameStop shares remain wildly overvalued.

As our own Alexander Green wrote, “Trust me. They won’t go higher much longer. And when it ends, it will be with a bang.”

This story isn’t quite over yet, though. After the news broke that Robinhood had blocked GameStop trading, a class-action lawsuit was filed. The suit, filed in the Southern District of New York, claimed that Robinhood…

“… purposefully, willfully, and knowingly remov[ed] the stock ‘GME’ [GameStop] from its trading platform in the midst of an unprecedented stock rise [and] thereby deprived retail investors of the ability to invest in the open-market and manipulating the open-market.”

There are obviously a lot of twists and turns left here. Is this the end of GameStop’s wild run? Could this turn into a trend, with retail investors simply moving on to the next over-shorted stock? All of this has yet to be seen. But when Robinhood blocked GameStop trading, it opened up a whole new can of worms in the process. Whether it had the best interest of its users at heart or not.

Looking for the Next Best Thing?

When Robinhood blocked GameStop trading, it left a lot of investors holding the bag. And even more are now looking around for the next best thing. If you’re trying to stay abreast of all the market-moving details, we suggest signing up for our Liberty Through Wealth e-letter.

In it, Chief Investment Strategist Alexander Green helps guide investors of all stripes toward the promising opportunities while avoiding major pitfalls.