Investors with exposure to Russian securities have found themselves in a bind since February 25. For the past month, the Moscow Exchange (MOEX), Russia’s stock market, has been in limbo. Russia suspended securities trading shortly after its attempted invasion of Ukraine, in response to a flurry of sanctions from the West. The halt was meant to prevent a massive selloff and ensuing crash, but has likely only delayed it.

The current Russian stock market trading halt is the longest in modern history. Despite the MOEX opening on March 21 for investors to trade ruble-denominated bonds, equities remain frozen. Even when equities trading resumes, foreign investors will find themselves locked out of the market, unable to offload securities even at fire sale prices. It’s a tenuous situation that’s likely to play out in relative chaos even for domestic investors with access to the MOEX.

Here’s a closer look at the precarious situation of the MOEX and why a Russian stock market trading halt is the equivalent of a band-aid on a bullet wound. 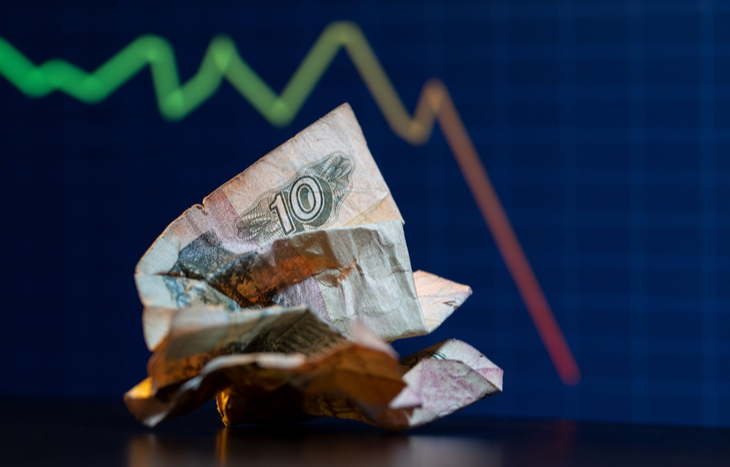 In response to Russia’s attempted invasion of Ukraine, world powers levied incrementally more severe sanctions against the country. The first round of sanctions went into effect almost immediately after the invasion began, which triggered a crippling 33% market loss. All trading on the MOEX halted and the freeze persisted through March.

The Russian stock market trading halt is only a delay for a seemingly inevitable market crash of epic proportions. In the time since the trading halt went into effect, virtually every other economic domino has fallen. The ruble has shed roughly 40% of its value against the U.S. dollar, while bond values current rate at roughly 70% to par. As these assets collapse, the stock market remains static; however, a selloff is all but certain the moment the halt ends.

Even if Western countries lifted sanctions tomorrow, the economic damage is already done. Goldman Sachs estimates that the Russian economy could contract as much as 10%, while inflation soars to more than 20%. The Russian Ministry of Finance lacks the funds or the economic controls to prop up markets in the face of such unprecedented upheaval.

The Russian Government Continues to Intervene

Despite all but certain economic collapse, the Russian government continues to try and stave off the inevitable. In fact, it’s becoming increasingly evident that Russia foresaw the damage of international sanctions and prepared for it.

In early March, the country was due to pay $117 million on two dollar-denominated bonds. Despite broad speculation of default, the government made good on its payments. In doing so, it subsequently revealed a stockpile of billions of rubles, set aside to maintain liquidity in capital markets. It’s evident that when the Russian stock market begins trading again, the government will deploy some of this cash to purchase equities.

The Russian government is also taking evasive action as it tries to preserve the value of the ruble. Through a series of capital control measures, Russia has made it more difficult to sell the ruble, forcing Western banks to settle trades in Russian currency. In doing so, it hopes to prop up the ruble’s purchasing power.

Despite the Russian stock market trading halt, Russian companies have continued to trade on foreign exchanges. Unfortunately, this trading action appears to be a precursor for what’s to come when the MOEX fully reopens.

On the London Stock Exchange, energy giants Gazprom and Rosneft have fallen to near-zero levels. Year-to-date, Gazprom has shed 88% while Rosneft is down 92%. Outside of these energy behemoths, Sberbank, Russia’s largest publicly traded bank, has also gotten crushed. Sberbank is down 99% and trades for pennies.

ETFs and other managed funds with exposure to Russian companies have suffered mightily, as well. The Lyxor MSCI Russia UCITS ETF, a UK fund that tracks Russian companies listed on the London Stock Exchange, is down 82% and continues to fall.

Before Russia even thinks about lifting the trading halt on stocks, it needs to weather several other economic hurdles first. Specifically, it needs to make good on upwards of $600 million in bond interest payments, followed by $2 billion in principal payments in early April. Moreover, how it pays will have significant bearing on the country’s financial situation: in rubles or in U.S. dollars.

Missing payments or paying in heavily devalued rubles would officially put Russia in default, which would only expedite the cratering of the MOEX. If the country does fall into default, it’ll be the largest default on sovereign debt in history. Moreover, it would effectively cripple the Russian economy regardless of whether the stock market halt is lifted or not. Numerous private and state-owned businesses and institutional borrowers would ultimately fold under the weight of a credit crash.

Will Russia Ever Lift the Trading Halt?

It’s inevitable that the Russian stock market trading halt will come to an end. The question is, when? As it stands, the halt is simply a way to stave off the inevitable crash that’ll ensue when investors sell their increasingly devalued equities in a panic. In the meantime, the Russian government seems to be looking for ways to cushion the inevitable fallout.

For investors with exposure to Russian equities, the time to sell has come and gone. There’s not much left to lose. In fact, many investors will find themselves forced to hold with no buyers at the other end of the transaction. And, for Russian investors, there’s nothing anyone can do until the MOEX officially lifts the freeze on securities trading.