In this article, Senior Markets Expert and Investment U Financial Host Matt Benjamin examines the rise of small cap stocks in 2021.

You may or may not be ready for a change of leadership. The stock market is, though. And I’m not talking about politics. In fact, the change in leadership I refer to here is likely to be much more important to your portfolio than who’s calling the shots in Washington, D.C.

Since the market began to recover from the “COVID-19 crash” of February and March 2020, megacap tech stocks have led the market upward. The FANG+ Index of 10 highly traded tech giants is up a stunning 113% since last April 13.

But a new leader has been slowly emerging, and it’s poised to take off as the 2021 economic boom unfolds. (Incidentally, the FANG+ Index is down about 5.2% over the past two months.)

So S&P large caps are, on average, 43 times larger than Russell 2000 small caps. A sizable difference, to be sure.

That said, let’s go to the chart! 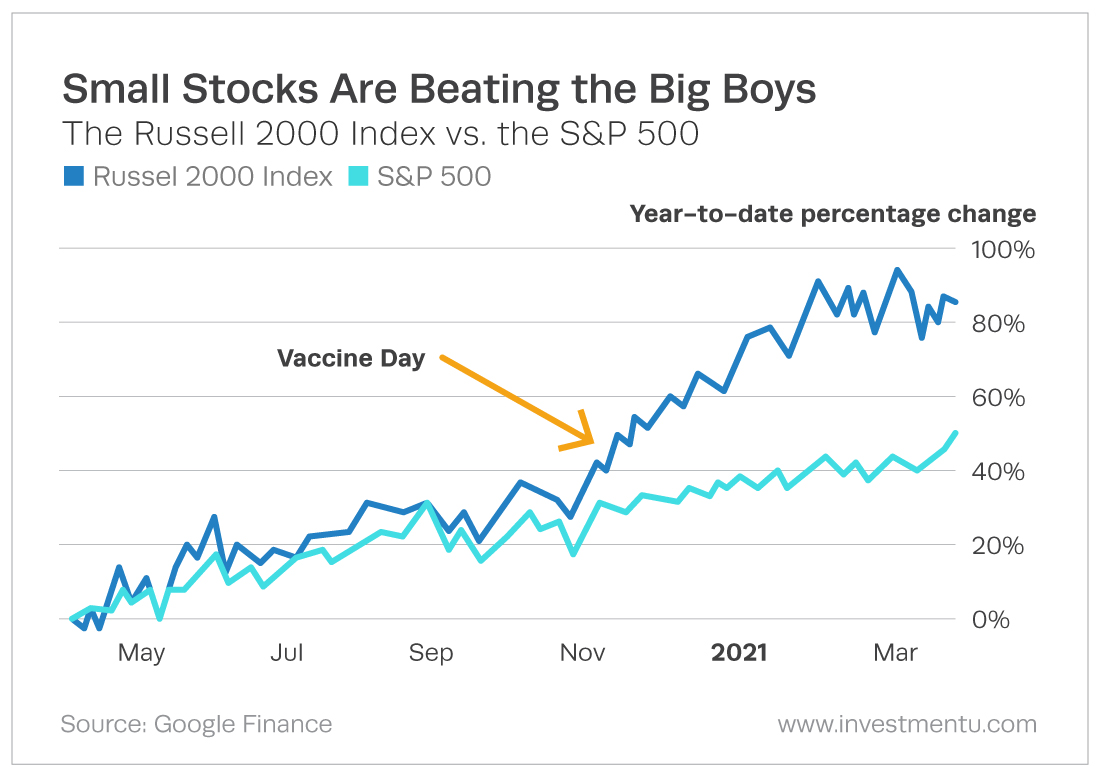 The two indexes were about even in 2020 until late September, when small caps began to outperform their larger brethren.

As you can see, the two indexes really started to diverge around the date some market analysts are calling “Vaccine Day,” or November 9, 2020. That was the day Pfizer (NYSE: PFE) and BioNTech (Nasdaq: BNTX) announced that their COVID-19 vaccine was 90% effective against the virus.

On that day, when it became clear that effective vaccines were on the way and the pandemic’s days were numbered, investors began to look beyond megacap tech stocks like Apple (Nasdaq: AAPL) and Amazon (Nasdaq: AMZN).

Investors had sought shelter in those “pandemic stocks” since the spring of 2020 as stable investment options. But the vaccine announcement gave them the courage to diversify out of mega-tech and back into companies with better long-term growth prospects.

Those long-term prospects have a name: the “Small Cap Effect.” It’s the observation that small cap stocks outperform large cap stocks over the long run.

“Small caps move like speedboats, while large companies are like oil tankers,” Quantitative Expert Nicholas Vardy has written. (He believes that 2021 is the year of the small cap stock.)

In addition, small caps tend to do better during economic recoveries (read: right now). They have more room to grow with the economy, and many small cap companies are in the services and financial industries, which are poised to take off this year.

Finally, small caps tend to derive most of their revenue from within the U.S., which makes them less reliant on slower-growing foreign economies.

So, have I piqued your interest in 2021 small cap stocks and their potential to push to the top? I hope so.

And fortunately, our Investment U Research Team can take it from here. They’ve just posted great pieces on small cap stocks to buy and hold and how to profit from a small cap index.

So go ahead… Allow yourself to think small this year.

When it comes to small cap companies, there’s no better industry to look at than technology. After all, it’s hard to name a sector that has made bigger strides than technology in the last few decades.

And technology is one of Energy Expert David Fessler’s specialties.

One of his favorite small cap stocks provides the technology that’s at the heart of the 5G revolution, and you’re not going to want to miss this ground-floor opportunity.

For up-to-the-minute insights on 2021 small cap stocks and more, sign up for our free e-letter below.