From Baltimore – Lately I’ve been thinking about animal spirits.

That’s the phrase political economist John Maynard Keynes coined to describe the human urge to take positive action, even if the decision to do so isn’t fully rooted in logic or mathematical probabilities.

It’s particularly appropriate right now, and every investor needs to consider it closely.

Well, as of this week, we are officially in a recession.

The National Bureau of Economic Research (NBER), which officially dates economic expansions and contractions, has declared that U.S. economic activity peaked in February. That peak marks the end of the recent economic expansion – at 128 months, the longest in U.S. history – and the beginning of an economic contraction.

The jobs numbers – among the most important economic data published – support that conclusion.

The current unemployment rate stands at 13.3%, down from 14.7% in April. But because of some errors in the way the Department of Labor collected the data, the jobless rate is probably closer to 16%, or even higher. (Many unemployed people are not counted as such because they haven’t reported that they’re actively looking for a job.) Compare that recent number with the unemployment rate before the pandemic and shutdown, which at 3.5% was near a 50-year low. And then there’s gross domestic product (GDP), or the size and growth rate of the entire U.S. economy. Second quarter GDP has not yet been released, but a good substitute for it is consumer spending data from the Bureau of Economic Analysis. Consumer spending fell 6.9% in March and another 13.6% in April.

So suffice it to say that consumer spending dropped like a rock the last two months, while unemployment soared to the highest rate since the Great Depression.

Some analysts would say that those numbers mean you should cut all unnecessary spending and sell your portfolios off.

If investors and consumers acted on the above data, the prospects for the U.S. economy would be far worse than they currently are.

But as Keynes observed with his thinking about animal spirits, when humans weigh a situation with mixed positive and negative signals, optimism often wins the day.

And it’s evident today in other data.

First, we have to look at the markets.

The fastest stock market crash in U.S. history has been followed by the fastest recovery. On Monday, the S&P 500 came within less than one percentage point of where it opened for the year.

Economists and market watchers often try to predict the shape of a recovery in asset prices or the economy. What we’ve seen this year is definitively a V-shaped recovery in the markets, and that’s the best possible shape. 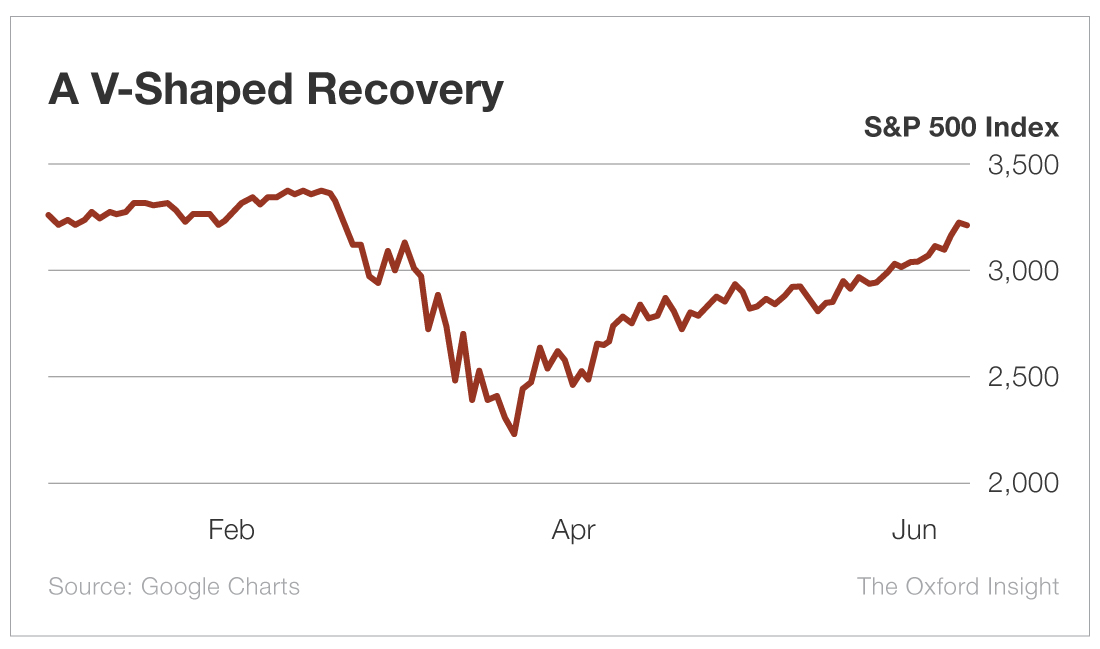 So despite the terrible economic data mentioned above, investors at least seem to have the animal spirits Keynes wrote about.

Well, they’ve had to significantly curtail – or even cease completely – their spending at restaurants, retail outlets, entertainment venues and other physical locations, as evidenced by the consumer spending data I mentioned above.

Consumers are not closing their wallets and purses. Instead, they’re just moving their purchases online, an activity that requires credit cards.

Just look below at the rebound in credit card spending reported by card giant JPMorgan Chase. Another “V” for sure. 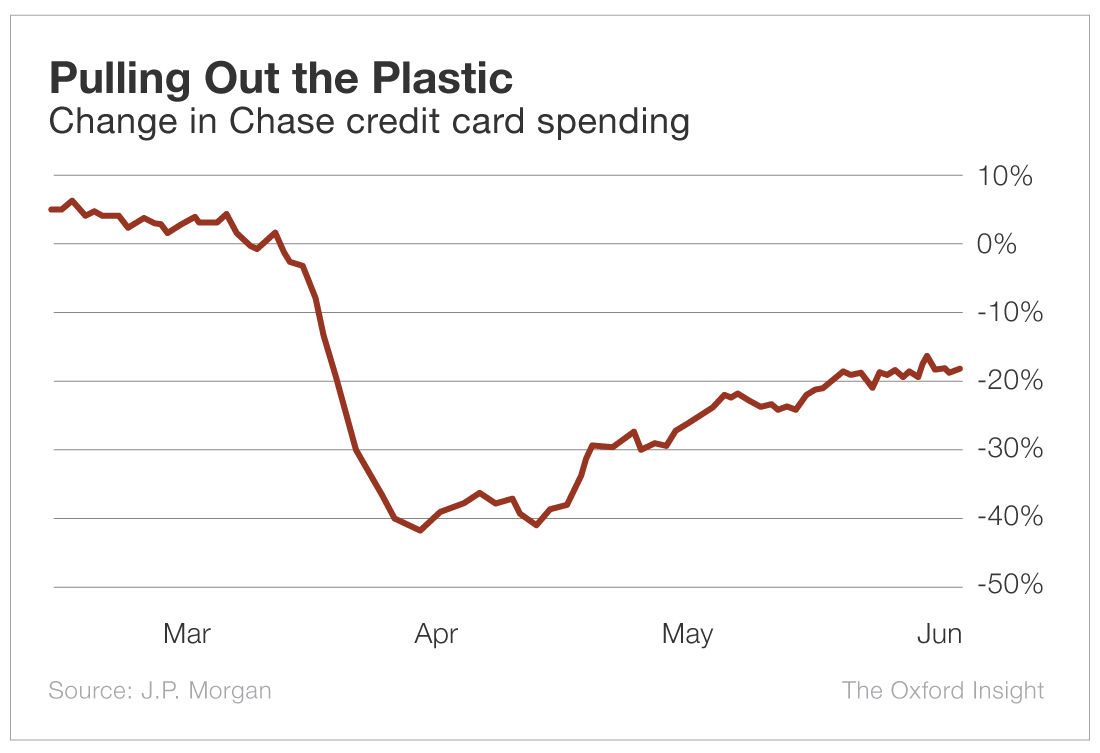 When consumers fear for the future, they don’t spend more, they spend less.

Clearly what’s happening now is just a change in the way consumers are spending.

This Time Is Different

No one can tell for certain what the future holds for the economy and the markets. But one thing is for sure: This recession is unique.

The NBER said exactly that in this week’s report about the recession (emphasis mine).
The committee recognizes that the pandemic and the public health response have resulted in a downturn with different characteristics and dynamics than prior recessions.

The NBER also hinted that it expects this recession could turn out to “be briefer than earlier contractions.” Since 1854, contractions have averaged 17.5 months long. (I’m betting this one won’t come anywhere close to that, but we’ll see…)

The bottom line is that our behavior in making purchases and investing in stocks, and the behavior of businesses in hiring people and spending on new equipment and technology, is not completely driven by hard data. And certainly not backward-looking data like unemployment and GDP.

Instead, our economic behavior is often based on an optimistic view of the future.

That’s certainly the outlook of our strategists here at The Oxford Club. In fact, Chief Investment Strategist Alexander Green began rebuilding his portfolios on March 24, the day after the market bottomed. And now he’s sitting on several big gains.

As Keynes wrote, “If the animal spirits are dimmed and the spontaneous optimism falters, leaving us to depend on nothing but a mathematical expectation, enterprise will fade and die.”