From Baltimore – The Federal Reserve saved me a bunch of money this week.

That has me worried. And it should worry you too. But more about that below. First, let’s talk about an oddly related phenomenon: helicopter moms (or dads).

If you’re a parent, you know them well. While they feign conversation with you and other parents on the bench at the playground, their attention is firmly fixed on their little one over at the monkey bars or that treacherous-looking swingset.

One minor slip or fall, one less-than-ideal interaction with another child, and they spring to life, ready to put all of their parental wisdom and compassion to work to salve the knee scrape or disappointment that little Emma or Jack has recently sustained.

And your own attempt to diffuse the “crisis” with a bit of humor – “They’ve gotta take their lumps, right?” – falls flat with these humorless moms and dads.

In fact, this type of parenting – well-meaning as it is – may be detrimental to children. One study found that mothers who are overprotective of their children in physical play may actually increase their kids’ risk of health problems.

At the very least, it’s annoying (to me, at least) when parents act this way.

And when the world’s most important central bank acts this way, it’s deeply concerning to say the least.

Now, don’t get me wrong. Providing unconditional love, guidance and compassion to children is critical to their self-esteem, success and ultimate happiness.

Similarly, the government has a definite role to play in the modern economy.

Anyone who claims we live under laissez-faire or free market capitalism is living in a fantasy. Western nations abandoned that system after the Great Depression, settling instead on what you might call “managed capitalism.”

When aggregate demand falls off, central banks step in with cheap loans and low interest rates to get people spending again. When unemployment spikes due to, say, a housing crisis or a pandemic, governments provide stimulus spending – consider the $3.6 trillion in stimulus this year alone by the U.S. government, with more on the way.

Even in times of noncrisis, the government safety net – food stamps, unemployment insurance and the rest – is there to offset the slings and arrows that the free market can send our way.

But this week, the Fed went too far in this direction. And the perils of its unprecedented actions have me worried.

My own portfolio provides a good example of the negative consequences that can result when the Fed oversteps its role and essentially becomes a helicopter parent.

I’ve recently begun to trade options, and I had some early success.

I bought call options on the stock of a well-capitalized, well-managed U.S. bank. My rationale was that, because of its financial health, large size and importance to the U.S. economy, this stock would soon return to its pre-pandemic valuation.

Those options rose in price, and I sold them at a handsome profit. I then bought more and sold those for an even bigger gain.

And then I got a little greedy. I bought a greater number of calls a month further out, with a more ambitious strike price. I probably overpaid for them, too.

When markets corrected last week on fears of a second virus wave, the bank’s stock – like the rest of the market – dropped dramatically in price, nearly wiping out my options entirely.

Luckily, I only dabble in options trading. I didn’t lose my house or my retirement savings. But my modest loss on these options should have taught me an important lesson about the risk inherent in options.

They don’t always rise in value, and many factors can send them plummeting.

But in this case, the Fed bailed me out.

The Dow Jones Industrial Average was down 5.6% last week on renewed virus fears. On Monday, markets opened sharply down and were still off about 0.5% at 2 p.m.

That’s when the Fed stepped in and announced it would begin buying a portfolio of individual corporate bonds. 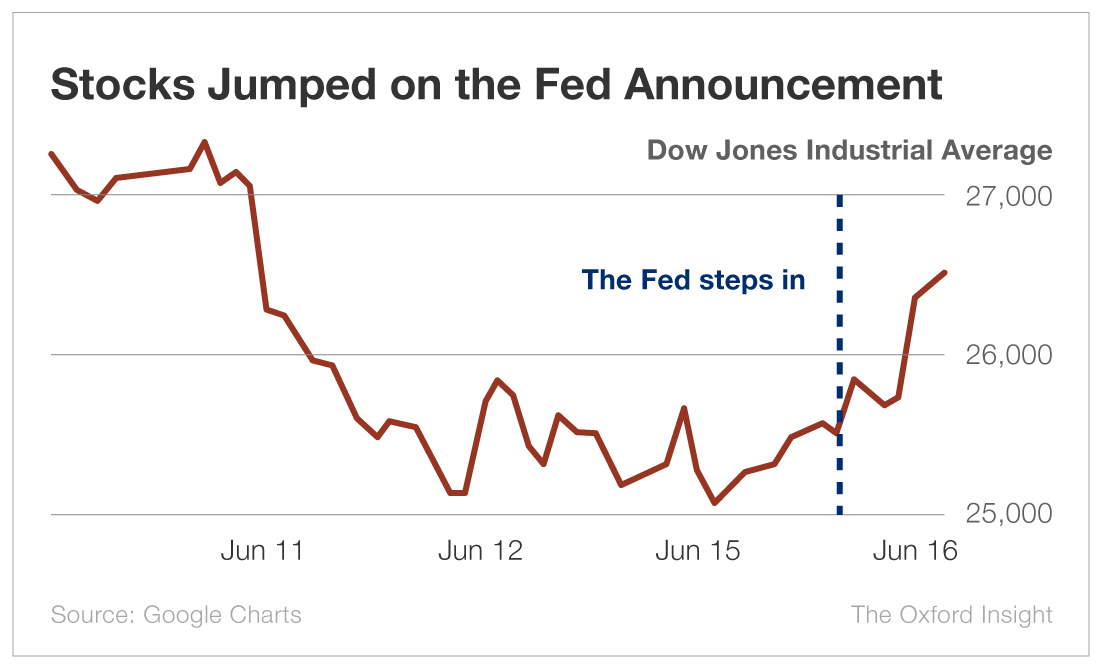 The price of my call options jumped with the underlying stock price, significantly cutting my losses. And if the Fed continues to come to the rescue as it did Monday, I have a reasonable hope that I’ll profit from this poorly thought-out options trade.

The Dow rose another 2% on Tuesday due to a strong retail sales number for May, as well as on expectations that the Fed will continue to put a floor under asset prices and expectations of a massive $1 trillion infrastructure stimulus bill designed to boost the economy.

Talk about help from mom and dad!

I suppose I shouldn’t complain. If the value of my portfolio drops too much, the Fed will lurch from the park bench with Band-Aids and soothing words.

And the Fed’s first aid kit is formidable, to say the least. Federal Reserve facilities and actions to support the economy and financial markets in the wake of the pandemic include…

And that’s only a partial list, believe it or not.

I wholeheartedly support central bank actions to cushion the blow from this unexpected pandemic, just as I support some management and oversight of our economy by the Fed and the federal government.

But the Fed’s vastly expanded reach – economists predict the Fed will buy some $5 trillion worth of additional debt by the end of 2021 – along with its continued reactions to market dips, risk turning our once-cautious central bank into “a sort of economics superministry,” according to one astute observer.

That would transform it into an institution willing to protect investors, entrepreneurs and risk-takers from every potential loss, instead of allowing them to learn from their mistakes.

Also, by purchasing corporate bonds (and potentially stocks, down the road), the Fed and its mighty balance sheet can instantly create winners and losers instead of leaving it to markets to determine them and allocate capital to the best opportunities.

The Fed’s formidable arsenal of programs can also severely distort markets, as investors will begin to react to what they think the Fed will do instead of making their investments based on company and industry fundamentals.

The long-term risk, if the Fed continues on this path, is a nationalization – and essential elimination – of the market itself.

Success and failure are part of the system. And sometimes, individuals – especially investors like me who make mistakes – just gotta take their lumps.