When financial markets are extremely volatile – as they are these days – stocks often see their worst declines early on Monday morning. That’s because investors have likely spent the weekend worrying about all the negative factors that might impact their portfolios and go into panic mode as soon as markets open for the week.

That’s just what happened yesterday. Stock prices plunged right out of the gate, and within minutes of the opening bell, the Dow Jones Industrial Average was down almost 1,900 points, or about 7%.

There’s a name for this phenomenon: the Monday effect. It’s backed by significant research showing that declines on Monday are steeper than on other days, mostly due to panic by investors.

Luckily, something has been done to mitigate this. After Black Monday in 1987 – when the Dow and S&P 500 both dropped more than 20%, the largest one-day drop in history – the New York Stock Exchange implemented so-called circuit breakers.

Now when the S&P 500 drops 7% during the trading day, trading is halted for 15 minutes so investors can catch their breath and regain composure.

That breaker was triggered yesterday after five minutes of trading, and it seemed to work. Markets stabilized and didn’t drop significantly lower.

Still, the market was way off for the day, with the major U.S. indexes down about 7%. That puts the broad stock market down more than 18% from its high back in mid-February.

And that means we’re almost in bear market territory. That’s when the market is off 20% or more from its recent high.

That sounds rough. But if you’re not very near retirement (when you have to begin selling your stocks for income), what happened after that should give you reason for optimism.

As you can see in the chart below, the market recovered those losses and went on to stage the longest bull market in U.S. history. 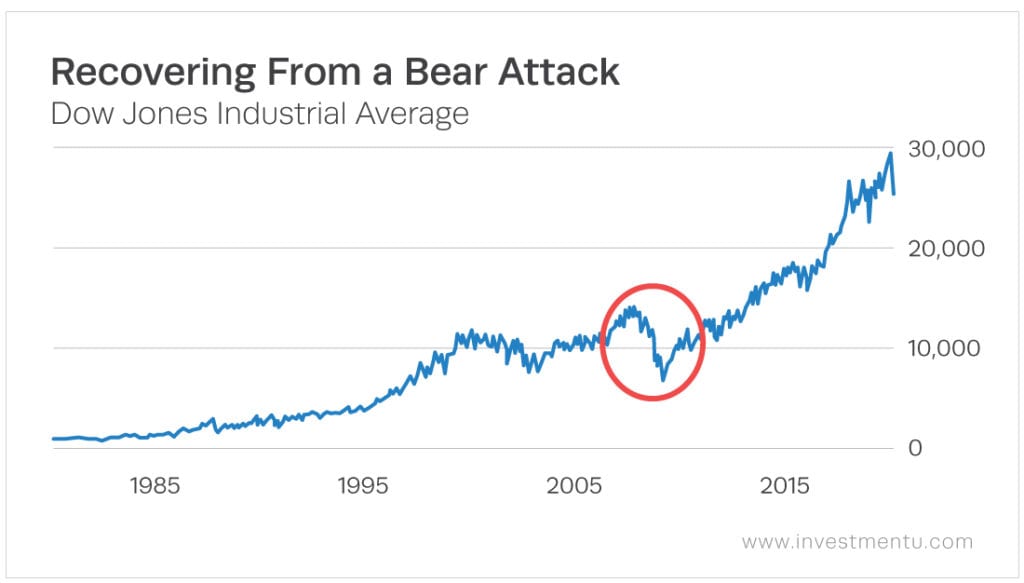 Hopefully you own stocks of companies with solid fundamentals, such as strong liquidity (access to the cash they need to operate), low debt levels, good management teams and a competitive advantage over their rivals. You shouldn’t sell these stocks, as they’re likely to perform the best when the market inevitably recovers.

You should also consider diversifying your portfolio with bonds – corporate, municipal and government. Bonds can act as a stabilizer in your portfolio. Bonds are up 3.5% since February 19, while the S&P 500 is down almost 18%.

Hang in there. We’ll get through this.