Three summers ago, my brother took me to one of his favorite bars in New York. (He worked for a hedge fund at the time.) Later that evening, there would be live music and a large raucous crowd. Conversation would be impossible. But while it was relatively quiet, my brother discussed a recent investment proposal he turned down.

It was brought to him by a startup that’s now a household name. It wasn’t a well-known company back then. But everyone in the startup investing business knew about it. And everyone wanted a piece of this startup – except for my brother.

His problem wasn’t the company’s founders, growth or business model. It was the investment terms.

“I wanted ratchet terms. And they said no,” he told me.

He said that while the company might do great in the public market, he didn’t have to take that risk. “If I can’t get ratchet concessions from this company, I’ll get it from another really great startup.”

Ratchet terms can include senior liquidation preferences – meaning investors with those preferences get paid first if a company gets sold or goes under – and the right to block an IPO. They can also guarantee a minimum price on shares in an IPO that avoids a loss. So let’s say an investor paid $10 per share for a 5% stake and IPO shares were issued at $8 per share. Investors have the right to convert their current shares to $8 per share, increasing the shares they own by 25% to maintain their 5% stake.

But why the heck would a startup agree to essentially pay back investors hundreds of thousands of dollars from its own coffers to make good on any losses incurred in an IPO? That’s not how investments in anything are supposed to work. Investing requires risk. Investors make money as a reward for taking on risk. Even investing in government bonds involves a measure of risk.

It’s a simple equation. The more risk you take on, the greater your potential return should be. If investors are not taking on risk but still expect super-high returns, something else must be going on.

And with the investing environment reeling from the post-IPO underperformance of WeWork and others, I expect this risk aversion to increase. And that means concessionary terms could once more be on the rise. A survey by the law firm Fenwick & West around the time when WeWork’s IPO plan unraveled shows a mixed picture… 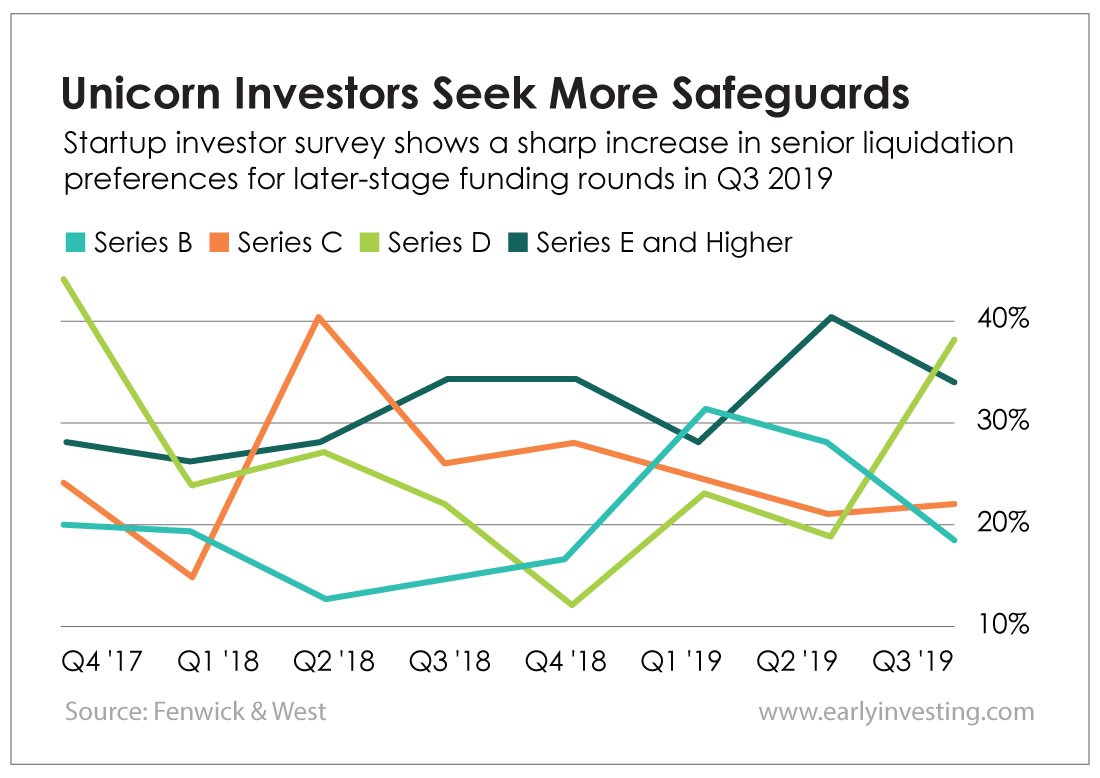 There’s a sharp increase in senior liquidation preferences from Series D investors, but a decline for Series B and Series E. Series C is flat. This is surprising for two reasons. One, that concessionary terms have migrated down the funnel to Series D, which is not considered late stage. It’s more midstage, also called growth stage. And two, that Series E is NOT showing an increase in these terms.

Over the past four months, every SoftBank-led funding discussion for late-stage and midstage startups has involved tougher terms, according to a person familiar with these discussions.

So I’ll be shocked if Series E and all the rounds that follow it don’t show a big increase in senior liquidation and other ratchet terms this year.

I’ll also be following Series C and D trends closely. Will ratchet terms continue to rise for Series D investors? And will they begin to increase in rounds as early as Series C (or even Series B)?

Ratchet terms are not right. In fact, they stink. And that’s exactly what I told my brother. He disagreed, of course.

My brother said ratchet terms benefit everyone. Founders get the valuation they want. Investors get the risk they’re comfortable with. Capital keeps flowing. And everybody wins.

But that’s not quite the case. Protection for midstage and late-stage investors comes at a price, especially when startups are bought out at less-than-stellar prices. What happens, for instance, when a company with $400 million of liquidation preferences gets bought out for $600 million? Investors with ratchet terms get their guaranteed cut. But all the other investors are left with little to show for their “unprotected” investments.

That might even include very early investors who take on the most risk and, therefore, deserve the biggest gains.

Investment Opportunities Why Seed Investing Is Better for You