Every few years, a new buzzword must be invented to describe ecologically responsible agriculture.

In the beginning, it was “organic.” Then it was “sustainable.” Today it’s “regenerative.”

Organic gradually fell out of favor because it was not broad enough. It did not capture the benefits of soil development.

Viewed over time as a system of don’ts, the word failed to showcase positive practices.

And once the government owned the word through regulation, its value plummeted fast with industrial “greenwashing.”

So, organic gave way to sustainable.

This may have been an improvement because it sought to answer the question of perpetuity. Could the system actually survive and thrive over the long term?

But as Monsanto adopted the term, it too fell into disrepute as major industrial players then described their operations as sustainable. After all, what is more sustainable than feeding a growing population?

Today’s word darling is regenerative. That’s probably not a bad choice, but we’ll see what it looks like in about a decade.

It’s hard to foresee how the conquistador side will corrupt the words developed by the nurturing side.

Word battles constantly seesaw as one side tries to explain its purity and authenticity while the other side tries to co-opt all those values.

Last week during a media interview, I was asked for a definition of regenerative farming.

To be clear, the emphasis in all these descriptive words is on soil. Does soil volume go up or down?

To a lesser extent, these words include energy. Do we produce more energy than we extract? (The best solar panel, after all, is still a green leaf.)

As I thought about a precise and concise definition for regenerative farming, I realized that the whole idea is about increasing the commons.

Farming touches more than just the land. If we’re going to offer a comprehensive paradigm, it needs to include lots of things.

Libertarians seldom use the term commons. It sounds way too close to communism, which is off-putting to freedom-loving folks.

But the truth is none of us can live completely on our own. The old adage “No man is an island” speaks to this principle.

I depend on a host of people, all performing their passion and expertise.

I don’t make my own clothes… and don’t know how.

I don’t make my chain saw to cut my firewood.

I certainly don’t make this laptop on which I’m writing this essay. Or the power that makes it go.

The idea that I can live above and beyond a community of resources and expertise beyond my ownership and knowledge is ridiculous.

A Giver, Not a Taker

When I mean that regenerative farming must increase the commons, then, I’m referring to not only the soil but also everything and everyone the farm touches.

Modern factory farming or chemical farming cares nothing about the commons. If fecal matter from a Tyson chicken house wafts over to the neighbor’s clothesline, it doesn’t matter. But it absolutely diminishes the commons.

When a North Carolina hog factory overruns its manure lagoon in a hurricane and dumps a million gallons of toxic fecal sludge into a swollen river, that diminishes the commons.

In many ways, the ultimate test of individual responsibility exercised in liberty is how it impacts the commons. If it takes more than it puts back, it’s extractive.

My farming should bring more green leaves to a given acre so that more sunlight can be intercepted and turned into decomposable biomass. More pollinators, more earthworms, more birds – these all indicate stewardship of the commons.

While the idea of the commons is rooted in the soil, its threads extend far beyond. Perhaps in a decade, regenerative agriculture will give way to “commons-increasing” agriculture.

Unfortunately, most people describing regenerative farming stop too soon. I’m guilty of it too. We rightly extol the virtues of soil and wax eloquent about its properties and how to enhance its quality and quantity, but too often we don’t extend the discussion to water, energy, neighborhoods, nutrition, aesthetics and aromatics.

If the agriculture kills a community by emptying out the population, that doesn’t increase the social commons.

When a county loses population because the 200-acre farms are now gobbled up by 3,000-acre farms, the commons suffers a defeat.

I’m certainly not opposed to large farms, but depopulating and destroying rural communities goes hand in glove with depleting water resources, eroding the soil, and poisoning the birds and pollinators.

In our current sound-bite culture, we must think more broadly. We must push our ideas to include further ramifications and not be content to stop at the most elementary and simplistic nuances.

I have no idea how long regenerative farming will be the favorite description of the good guys, but as long as it is, I’m going to stick with increasing the commons as a definition.

That opens up all sorts of conversations.

For my libertarian friends, it pushes them to think about communal responsibility and dependency.

For my liberal friends, it pushes them to think about abundance rather than scarcity.

And of course my greenie friends smile and salute whenever I use the word commons, so that builds bridges too.

Let’s all commit ourselves afresh to building the commons. 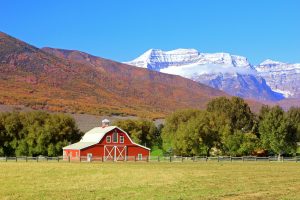