Virtual reality technology has been around for several years but is just starting to gain serious traction. That’s why I’ve tracked down the best virtual reality stocks.

When most people think of virtual reality, they usually think of cheap goggles that offer a slightly enhanced, interactive video game experience. However, the technology has taken major strides in recent years and now has major applications in the automotive, healthcare and manufacturing industries.

In 2019, the total VR market was just $3 billion. However, it is expected to grow at a whopping 44% over the coming years to reach $57 billion by 2027. As you might expect, the bulk of this growth will likely be generated by just a handful of companies.

Let’s take a quick look at the 5 best VR stocks to buy in order to tap into this growing industry. 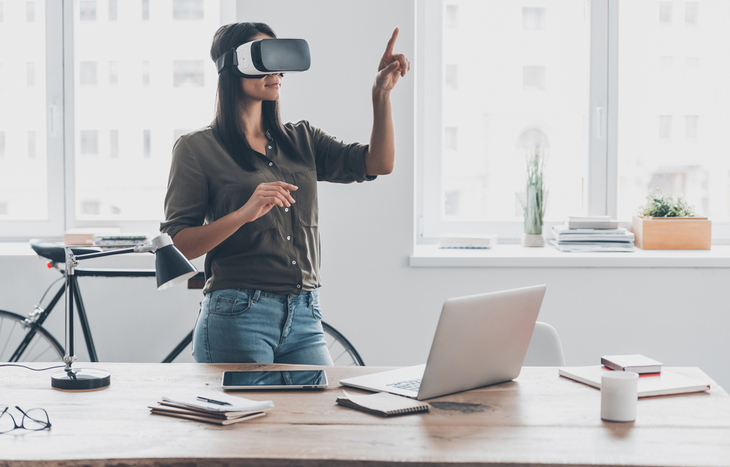 The Basics of Virtual Reality Stocks

Virtual reality is a computer-generated simulation in which you can interact within an artificial three-dimensional environment. You can use electronic devices, such as special goggles with a screen or gloves fitted with sensors. And all these new devices might push virtual reality stocks higher.

Virtual reality technology first emerged as more of a “fun to have” product for consumers but is transitioning into one that’s a “need to have” for businesses. One of the reasons for this transition is the COVID-19 pandemic.

The pandemic forced people to start working remotely, which is a trend that’s expected to outlast the effects of COVID-19. This has increased the need for businesses to offer enhanced virtual training sessions, product demos, employee meetings, etc.

This also means that, for stock investors, there is a much bigger need to buy a few of these top virtual reality stocks for their portfolio.

Meta (Nasdaq: META), formerly known as Facebook, made a major move into VR in 2014 by acquiring Oculus, the VR industry leader, for $2 billion. During the purchase, Mark Zuckerberg claimed that “mobile is the platform of today but we are preparing for the platform of tomorrow.” He has stood behind this claim since then and today about 20% of Meta’s employees are working on VR related projects. This easily makes Meta one of the best virtual reality stocks to buy.

I believe that augmented and virtual reality are going to enable a deeper sense of presence in social connection than any existing platform. They’re going to be an important part of how we will interact with computers in the future. So we’re going to keep investing heavily in building out the best experience this year, and this accounts for a major part of our overall R&D budget growth.

Meta’s Oculus currently dominates the VR market with 53% of the total market in 2020. In 2021 Meta generated an impressive $118 billion in total revenue and $39 billion in net income.

It’s clear that Meta is aggressively pursuing virtual reality and I certainly wouldn’t be one to bet against Zuck when he smells blood.

Sony is a Leading VR Stock

After Meta’s Oculus, the next biggest player in the VR space is Sony (NYSE: SONY). This makes Sony the next virtual reality stock to consider buying.

While Meta wants to use VR to power the next level of human interaction, Sony is more focused on offering the next level of entertainment. Its PlayStation VR is currently on the market for $300 and it has sold about five million units so far.

Sony posted total revenue of ¥9 trillion and a net income of ¥1.17 trillion in fiscal year 2021. The company has plenty to spend on virtual reality research & development over the next few years. Just like Meta, Sony is throwing its full weight behind expanding its virtual reality offerings. Which should make this a top virtual reality stock to watch in the years to come.

Microsoft (Nasdaq: MSFT) is another one of the top virtual reality stocks. It’s almost always one of the leaders in all things technology and VR is no exception. It currently has a few virtual reality products on the market including the HoloLens 2, the HP Reverb G2 and the VIVE Cosmos Elite. These products range in price from $500 to over $5,000. While the Reverb is designed to be much more of a consumer product (mainly for entertainment and gaming) the HoloLens 2 has a wider range of applications.

Microsoft is in a unique position to offer virtual reality to consumers as well as businesses. It can help me and you have more fun while playing Xbox while also helping Mercedes Benz build cars more efficiently.

On the business side, Microsoft is developing its new Mesh Platform which is supposed to be the next step for Microsoft Teams. Mesh will allow people to collaborate in a virtual environment as avatars without the need to be physically together. It’s calling this type of human interaction “holoportation.”

Microsoft posted a tidy net income of $61 billion in fiscal year 2021 and its annual revenue has been growing at around 15% for the past 5 years. This unique virtual reality stock has enjoyed a nice run of over 250% in the past five years.

Apple (Nasdaq: AAPL) has almost always had a reputation for being one of the most innovative companies on the planet. It started with the Mac and expanded with the iPod and iPhone. In recent years, it expanded into the wearables market and has received most of its growth from the Apple iWatch. Now, some analysts hope that future growth will make Apple one of the. best virtual reality stocks.

Even though Apple does not currently have any VR products, its heavily rumored to be investing tons of resources into designing virtual reality products. Despite being later to the VR game than other companies, Apple will have a unique advantage of implementing VR technology into their massive ecosystem of products.

Long term, Apple might even create an App Store for a VR headset where users can play video games, stream movies and FaceTime with each other. Apple does not plan to have any products on the market until at least 2023. Instead, it’s taking its time to ensure it’s brining the best possible product to market.

Over the past five years, Apple’s stock is up 288%. Now let’s take a look at the last best VR stock to buy…

Google (Nasdaq: GOOG) was one of the first companies to try its hand at VR technology with Google Glass. This product was ultimately over-hyped and ended up flopping. Since then, it’s been back to the drawing board and has come up with a few other products.

What makes Google one of the best virtual reality stocks is Google Earth VR, VR180 cameras and Cardboard. Google Earth VR is quite literally a digital map of the world where users can choose to walk, fly or browse around the world. It’s like Grand Theft Auto but it’s a map of the entire world.

The VR 180 cameras let you take pictures in 3D, which can then be viewed through its Cardboard product. If other companies are trying to make the biggest, baddest headsets then Google is doing the opposite. Cardboard is a simple piece of cardboard that folds over your VR set.

Google hires some of the brightest minds on the planet. It’s been creating innovative products for years and are sure to continue this trend into the VR space. Google’s stock has enjoyed a run of about 135% since 2017.

The virtual reality stocks above have the resources to continue innovating. In the coming years, their VR efforts should help drive sales higher. Although, there are many areas investors can make money. Here’s some more industry and investing research…