Visa (NYSE: V) stock has been a huge company for a long time. With its market cap over $450 billion, Visa stock forecast had massive growth over the decades. And founded in 1958, it’s got a long history of success trailing and supporting it.

But, its large size brings a few different issues. And one of those issues involves a small helping of drama. If you didn’t know already, Visa is a credit and debit card company. And working in countries all around the globe.

They offer many solutions for businesses, individuals, and travelers. And they even make sure they provide receivers for those payments. Enterprise, government, merchant and point-of-sale are all covered by Visa stock. Also, Visa awards special grants. 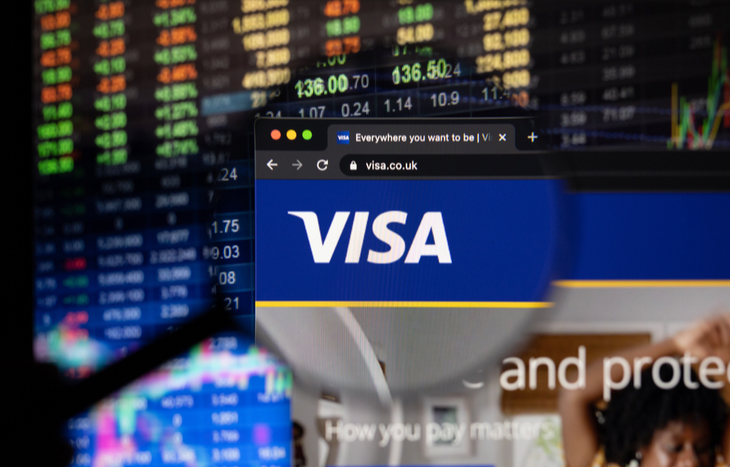 Visa stock does offer a dividend, but don’t quit your job over it. At less than 1%, it’s just a little nice bonus that comes with owning the stock. Public stock has built a big pile of capital for itself since it first listed in 2008. Visa stock forecast for 2020 shows it hit an all-time high in February. Then, it plummeted by 30% over the next month. It shot back up the two months after. And made its current all-time high in July 2021.

Now, Visa stock forecast shows its stock price is trying to make its way back up. It did correct itself. But, shortly after that, it began making spikes again. And, although it hasn’t reached a new all-time high, it seems to be on a short-term, slow-rising bull.

Leadership for Visa stock is very capable. Each one of them has been very successful in their roles. The only thing to watch out for is making sure they ethically stay in their lane. Because although nothing came from it (that we know), there was still an investigation. So, that likely means there was something going on. That kind of attention usually does not just pop up out of nowhere.

Even if those things are small white lies, they poke holes in the company’s reputation. And, they have potential to become larger holes that do worse damage. A business is much like a person. If it doesn’t take care of the core values and issues, things will only get worse as time goes on.

What Happened to Visa Stock?

Well apparently, Visa stock may have been violating some antitrust laws. And the belief is they could be doing this by attempting to restrict competition.

Visa seemed to be bribing companies like Stripe, Square and other fintech firms. Because these firms only use Visa for certain situations. So, there may have been a deal worked out where there were lower fees given to fintech companies. And then, those companies were expected to send more customers their way. That is, they were more likely to give Visa the business rather than other competitors.

Investigators looked into it, and found out that it’s likely the company is in compliance with the laws. Even with only an investigation, stock price fell over 20% in five months. And yes, it’s recovered about 10% since then. But, it is still much lower than its all-time high.

Recently, Visa stock has suspended services to Russian peoples. And this could help or hurt Visa. Because there are some interesting details about this suspension. If a Visa card is registered inside of Russia, it will not work outside its borders. And, if a Visa card has been registered outside of Russia, it will not work inside its borders. So, they will be doing much less business. But also, that could be taken either way by its customers.

Hiring on a new global Chief Marketing Officer also shows the company is keeping its eye on areas to improve. Plus, a new head of Investor Relations, and participation in Investor Conferences.

What Investors Can Expect

To predict what a stock will do in the future requires some investigation of the recent past. Visa stock forecast for 2021 saw incredible performance after the huge economic downturn in 2020. And now, the stock has had a correction.

Recently, they announced their advocation for financial education in U.S. schools. Visa stock has also announced the purchase of Tink. And Tink is a European platform that connects banks and financial companies all over. The result is a streamlined, one-stop digital shop for all things finance. And they aim to increase quality and efficiency in finance. All while making less risk for everyone involved.

By taking on this company, Visa stock aims to help transform and keep up with the industry. That is, many of the major issues of finance and working with large banks. And this has potential to change the industry in some great ways and not so great ways. Of course, the merge and growth of Tink inside of Visa will produce its own challenges. Both for the company and customers.

But, it also solves some major issues that haven’t been addressed via other financial institutions. Things that have gone on far too long. So, it’s likely this acquisition could blow Visa stock up to new heights. And, if Visa makes sure to keep things honest and purely ethical, it could go higher. If not, who knows what will happen. It could go up a little or a lot, or go down after rising.

I would keep my eyes open and look very carefully at the leaders. And, those they employ. Because it does take a lot to build a company up to the heights Visa stock has gone. But, it only takes a few small holes or one larger one to break the dam. Although it’s obvious when analyzing Visa stock forecast that it still has its eye on growth, the company must play nice about it. There’s fighting your way to the top. And then there’s gliding your way to the top. And if Visa stays hungry, they will grow. But, if they get too greedy, it will mean self-sabotage. And that is a very slippery slope that could lead to self-destruction for Visa stock.

Otherwise, Visa stock has a promising outlook. Especially with the purchase of Tink.