“Funds don’t have track records, but fund managers do.”

“There’s no such thing as the goose that lays the golden egg forever.”

For years, I followed the Forbes Honor Roll rankings of the best mutual fund managers in both bull and bear markets.

But after a while, I noticed that only a handful of funds consistently make the list year after year. And after 10 years, the previous top performers all but disappeared and new ones emerged. Eventually, every fund lost its magic touch, and some never made it back.

In the 1990s, Bill Miller, manager of the Legg Mason Capital Management Value Trust, had the hot hand. His fund beat the S&P 500 Index 15 years in a row from 1991 to 2005. But then the fund cratered during the 2008 financial crisis. He left to start his own company.

Even the world’s most famous investor, Warren Buffett, is now underperforming the market indexes. His investment company, Berkshire Hathaway (NYSE: BRK-A), has gradually gotten bigger and bigger, but at the same time has found it harder and harder to beat the market. (Thanks to Nicholas Vardy for pointing this out to me.)

See the remarkable graph of Buffett’s Berkshire performance below. 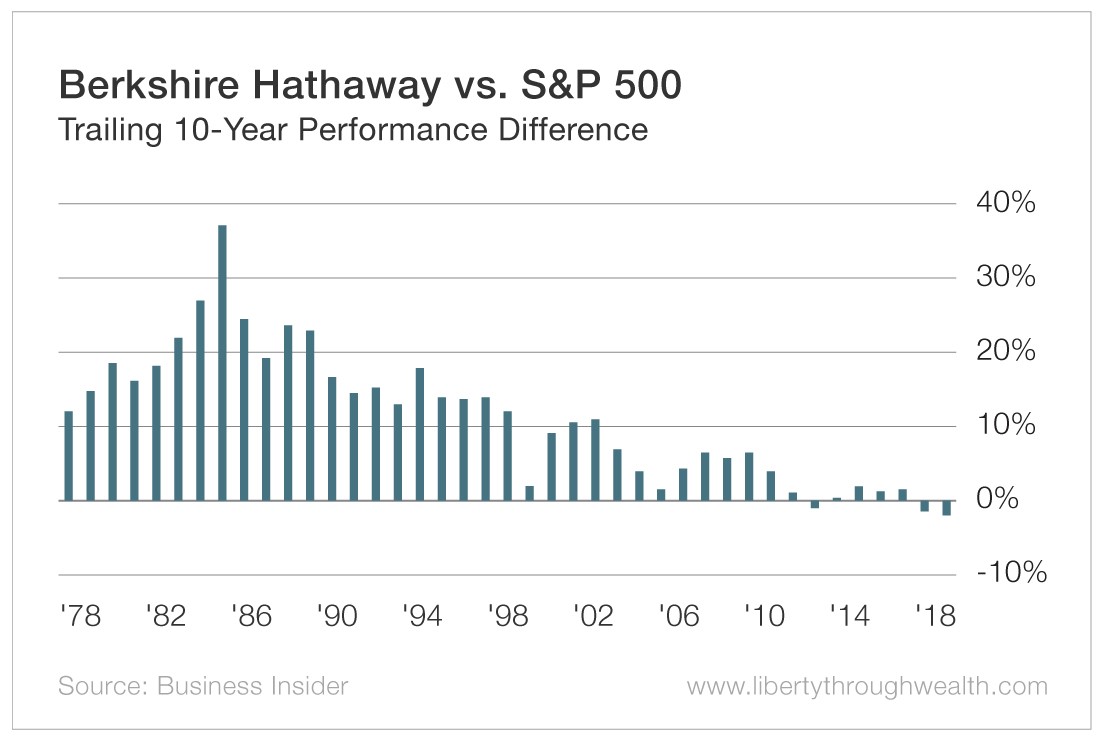 Recently, I attended the Mont Pelerin Society meetings at the Hoover Institution at Stanford University. This gathering attracts top economists and political thinkers from around the world.

While there I spent some time with Ron Muhlenkamp, legendary money manager of the Muhlenkamp Fund. He’s a strong supporter of free enterprise, the flat tax and free trade – my kind of guy.

For decades, his fund beat the market. He even managed to make money in the treacherous bear market of 2000 to 2003. He gave me a copy of his investment book Harvesting Profits on Wall Street, published in 2006 at the pinnacle of his success.

His formula for success was to buy good companies on sale, essentially adopting value investing based on Benjamin Graham’s fundamental analysis.

But Muhlenkamp’s magic touch ended abruptly, and his fund has really struggled since 2006, up an average of 4.8% a year in the past 10 years, compared with 13.8% for the S&P 500. His portfolio has gone through a lot of turmoil. Morningstar rates it only one star!

I see that his fund’s two biggest positions currently are Microsoft (Nasdaq: MSFT) and Apple (Nasdaq: AAPL), two of the best-performing stocks in 2019, and yet the fund rose only 15% last year, half the growth of the S&P 500.

It reminds me of Alex Green’s clever saying “Funds don’t have track records, but fund managers do.” (We’ll add this quote to the new seventh edition of The Maxims of Wall Street, due to be released next week.)

One fund that has done consistently well over the past 30 years is Jim Simons’ Renaissance Technologies fund, which includes the Medallion fund. It has managed to grow at an astonishing 66% annualized rate using high-frequency “quant” trades averaging no more than two days.

Simons’ fund is not open to the public, and even he realizes that it may be getting too big to continue to outperform.

Fortunately, my favorite money manager, billionaire Ron Baron, is still going strong with his Baron Capital growth funds. I’m betting he will continue to do well, but as Yogi Berra famously said, “Never make predictions, especially about the future.”

Financial Freedom The Index of Economic Freedom: Where There’s Freedom, There’s Money To Be Made Especially In This Fund