Cryptocurrency—or, more specifically, blockchain—is widely touted for its relative infallibility. Thanks to the distributed nature of blockchain ledgers and decentralized nature of crypto, no single person or entity can manipulate the blockchain. That is, unless they stage a 51 attack.

What is a 51 attack? It’s a very complex endeavor to control the hashing power of a blockchain, and it’s the closest thing to bitcoin fraud possible. 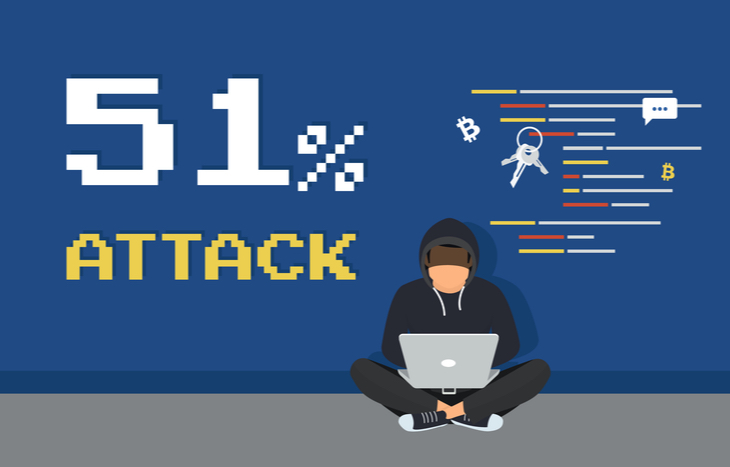 The Definition of a 51% Attack

Miners manage decentralized crypto blockchains. These are computers responsible for verifying the complex hashes that represent transactions on the blockchain. Miners work in “pools” to leverage computing power, since there are so many transactions that need verification. Their purpose is simple: to verify that the transaction taking place is valid. They do this by verifying previous entries to ensure the person selling the crypto assets actually has them.

If a majority of miners verify the transaction, it’s recorded on the blockchain. If they reject it, it’s not added to the ledger. This means that anyone who wants to manipulate the blockchain for malicious purposes would need to control at least 51% of the mining power.

What’s the Outcome of a Successful 51 Attack?

There are several major outcomes to consider in the event of a successful 51% attack—none of them good. Controlling the majority of computing power in a miner pool gives the malicious agent a significant amount of power. Here’s what the effects might look like:

These are the catalysts for even more headaches. Some crypto experts theorize that a successful 51% attack on major crypto asset could fundamentally undermine the entire currency, causing it to crash!

A Hypothetical Problem or a Real Concern?

The amount of computing power needed to execute a 51% attack is substantial. For major cryptocurrencies like Bitcoin and Ethereum, it’s nearly impossible for a pool to reach 51% of the computing power to control hash verifications. That said, there have been near-misses in the past.

While Bitcoin, Ethereum and others are too large to attack, there’s a world of smaller cryptocurrencies out there that are highly susceptible to 51% attacks. In fact, since 2018, there have been several high-profile, successful attacks.

The smaller and newer a cryptocurrency is, the fewer the number of miners. This paves the way for bad actors to take control over mining pools and reach hashing power in excess of 51%. Thankfully, attacks on new coins are rare due to the relatively low value of the coin (pennies or tenths of a cent).

This actually brings up an interesting alternative to a 51% attack. Instead of using the mining pool to attack the blockchain, bad actors could actually leverage the pool to mine for coin. For new currencies, it would actually be more lucrative to leverage the computing power of the mining pool to generate new coins, rather than try to double-spend or control the blockchain. In this way, coins are actually safe from 51% attacks while they’re smaller.

Is Crypto a Safe as it Seems?

Cryptocurrencies, such as Bitcoin and SafeMoon, come with a range of vulnerabilities and market volatility. However, that doesn’t mean you shouldn’t invest in crypto. In fact, expert Andy Snyder is on a crypto journey of his own and you can follow along by signing up for the Manward Financial Digest e-letter below.

So, what is a 51 attack exactly? Most crypto experts will tell you the same thing: it’s the only real threat to the integrity of crypto. The good news? For larger coins, it’s virtually impossible to mount such an attack. For small coins, it’s rarely worth it. This means, although not completely infallible, crypto remains one of the most secure investment assets thanks to its proof of work concept and the decentralized nature of the mining pools that oversee the blockchain.