What is After-Tax Contribution?

When contributing to your retirement accounts, you’ll need to decide if your contribution goes in before or after taxes. Many advisors will tell you to go the after-tax route. What is an after-tax contribution and why does it matter? It simply means the government taxes your income the year it’s contributed, instead of when it’s withdrawn. This is important for one simple reason: pre-paying your taxes on retirement funds allows them to compound without the prospect of heavier income taxes in the future.

You probably know after-tax contribution accounts by a different name: Roth accounts. Roth IRAs and Roth contributions to a 401(k) are “after-tax” contributions. You’re going to pay more in taxes on this earned income now, but it’ll grow without the threat of heavier taxes in the future. 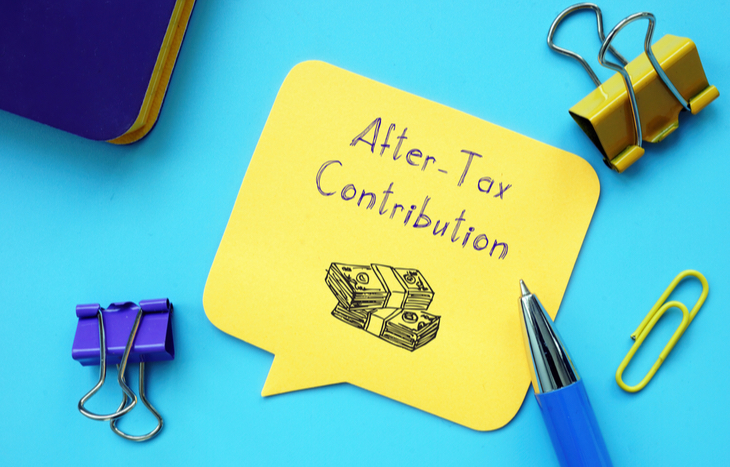 There are two ways to think about retirement contributions: pre- and post-tax. Pre-tax contributions aren’t taxed before they’re invested. Post-tax (after-tax) contributions already have taxes deducted from them. This is an important distinction not only for tax keeping purposes, but for long-term investment strategy.

Individuals choosing the pre-tax mode of investing keep more money now. You’re not paying taxes on your earned income; therefore, your tax burden is lower in the immediate. This is advantageous for anyone working toward financial freedom. Moreover, the idea is that your earnings will grow faster, since they’re tax deferred. This allows them to compound a higher principal balance for a longer period of time. The downfall? You’ll pay income tax in the future when you withdraw your retirement savings or take Required Minimum Distributions (RMDs).

If you opt for an after-tax contribution strategy, you’ll pay taxes on earned income upfront. While this can stunt your cash flow in the immediate, it’s a forward-looking approach that can set you up for long-term peace of mind in retirement. Paying taxes today means tax-free distributions in the future, at a time when the tax rate is likely higher than it is today. As a result, you’ll pay a lower effective tax rate by “pre-paying.” While your investment might not grow as fast as a pre-tax strategy, you’ll retain more of your wealth.

The important thing to remember is that there’s no “right” strategy—only the one that fits your lifestyle and mode of investment. When you pay taxes on your income matters based on how much income you’re claiming.

The concept of after-tax (Roth) contributions is appealing to many people not only because it takes care of taxes upfront, but because there are other unique benefits to Roth contributions. Here are a few more reasons people find after-tax contributions so appealing:

There are myriad other benefits associated with after-tax contributions and Roth accounts, as well. Their tax-advantaged nature makes them a powerful vehicle for future wealth-building—including for estate planning and generational wealth building.

While the positives heavily outweigh the negatives, after-tax contributions aren’t without their pitfalls. There are several reasons a person might avoid a Roth account, no lest because they want to capitalize on faster compounding:

If a person passes away before retirement age, they’ll never realize those tax benefits.

While none of these represent any significant threat to your wealth, they’re nevertheless important to consider. Individuals should consult with a financial advisor or fiduciary when weighing after-tax contributions against pre-tax contributions or their overall investment strategy.

Where Did the Name “Roth” Come From?

After-tax “Roth” contributions get their name from United States Senator William Roth (R-Del.), who helped pioneer them in 1989. Roth and fellow Senator Bob Packwood (R-Ore.) proposed that Americans have the option to forgo tax benefits on immediate earned income, to capitalize on these benefits in the future. The Roth IRA came to fruition and has since become a de-facto mode of investment for many.

In 1997, the United States ratified Roth IRAs and other types of Roth contributions as part of the Taxpayer Relief Act of 1997. The act lowered taxes for most citizens, while establishing the after-tax contribution benefits of Roth accounts permanently.

Plan for a Tax-Free Future

What is an after-tax contribution? For someone thinking far ahead to their retirement, it’s a way to avoid paying higher taxes. By realizing the tax burden of retirement contributions today, you’re allowing your money to compound unimpeded. In the future, your after-tax real rate of return is likely to be higher, since you’ve effectively paid the taxes upfront.

If you’re planning on growing your earnings and amassing wealth for the future, it’s always best to pay your taxes upfront. The tax rate you pay today is the one you know, and the tax rate of the future isn’t likely to be lower.