What is an Activist Investor?

An activist is someone who incites change for a cause they believe in. So, what is an activist investor? You won’t typically hear about these individuals (or groups) in successful companies. Instead, they’re looking to create change in companies that are underperforming, mismanaged or generally unguided. Most of the time, it’s not any one single person. Rather, it’s a coalition of activist shareholders that form a group with enough leverage to affect change.

If you own a stock that has activist investor activity, you might wonder if it’s time to cut ties and finally realize the loss you’ve been sitting on. But, before you do, read on. Activist investors actually have a strong history of affecting positive change. If you’re sick of bag holding an underperforming company, activist investors could be a sign of good things to come. 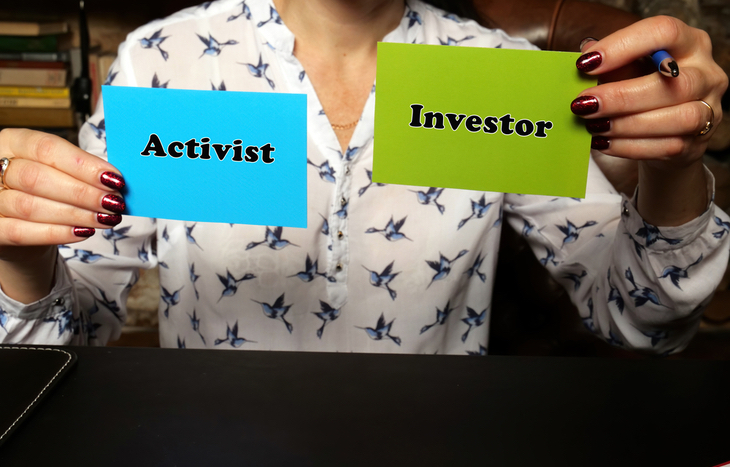 How Does Activist Investing Work?

Activist investing works by using shareholder value to apply pressure to a company. This is a significant undertaking, since it usually requires controlling 5% or more of the company’s voting shares. This takes a significant amount of capital. It’s why activist coalitions are popular—and why activist firms form. They leverage significant shared equity to apply pressure to the company in question. In fact, it’s so significant that activist hedge funds and advocacy groups must file a Schedule 13D with the Securities and Exchange Commission when they acquire 5% or more of a company’s voting class shares.

What does “applying pressure” look like? Typically, it starts by taking over seats on the board of directors. More voting shares means the ability to position new leaders to affect change from the inside. Other forms of pressure include voting down executive compensation packages or even through media campaigns calling for leadership to step down.

Most investors saw activist activity as infighting in the early days. Today, there’s a much more positive spin—namely, the prospect of bringing better leadership to a languishing company.

Meet the Fathers of Activist Investing

Activist investing has a long history that dates back to the 1950s and 60s. The concept has come a long way from power grabs and profiteering. Today, activist investing is about installing new leadership and practices that turn the company into a long-term success for investors. Here’s a look at some of the people who pioneered this style of activist investing:

Today, there are dozens of activist hedge funds and advocacy groups out there, including Elliott Management, Third Point Partners, Starboard Value, ValueAct Capital and many others. Each fund targets different sectors and companies, and each has its own approach to activism.

Examples of Activist Pressure and Takeovers

Activist investing has become increasingly popular over the last decade. As many as 100 publicly traded companies have seen activist activity in the last five years. Some resulted in full takeovers; others merely needed a shove in the right direction. Here are several headline-worthy examples:

Modern activists are getting even smarter. They’re not just taking over underperforming companies—they’re paving the path to market for ones they want to control. The newest fad in activist investing is a Special-Purpose Acquisition Company (SPAC), which allows activist hedge funds to control a company’s path to market, rather than jumping in after it’s already public.

Is Activist Investing Good or Bad?

What is an activist investor? On the surface, it’s a fund that believes it can create value in a company that’s underperforming the market. That’s a good thing. But below the surface, it’s important to consider intent. In the old days, the idea was to strip the company down and sell it off. Today, activists want to create long-term profitability—but that’s not always possible. Instead, they’re forced to decide the best course of action for the company and its shareholders.

To learn more about the various types of investing, sign up for the Profit Trends e-letter below. If you own stock in a company with activist activity, it’s important to understand what their goals are. If you believe they’re here to create long-term value, it may be a stock worth holding onto—one that goes from red to green in the coming years.