WWE Stock: Trade of The Day

Never in a million years would I think Bryan Bottarelli would recommend WWE stock. But he just did – and here’s exactly why….

“I didn’t grow this sweet Horse Shoe mustache for nothing!”

I did something extra special today – and grew this sweet horse-show mustache – just in honor of todays pick. Gillette calls it “A rugged style for a bold look…” and who am I to argue? So, while you feast your eyes on all this gloriousness, I’m going to tell you why it’s now time to buy shares of….World Wrestling Entertainment (WWE).

That’s right baby! You know the history….First came André the Giant and Hulk Hogan breaking holding chairs over each other’s backs in the 80’s (see that mustache – now it all comes together, right!)

Then came the Undertaker and Stone Cold Steve Austin on the 90’s. And then The Rock and Triple H jumping off the top rope in the on 2000’s…WWE has withstood the test of time. And right now, as shocking as it may sound, this company is thriving.

Thanks to the Covid lockdown, World Wrestling Entertainment is headed for record breaking revenue for 2020. Management already said they were “largely un-impacted” by the coronavirus outbreak. During Q1 2020, the WWE Network reached 1.46 million paid subscribers. 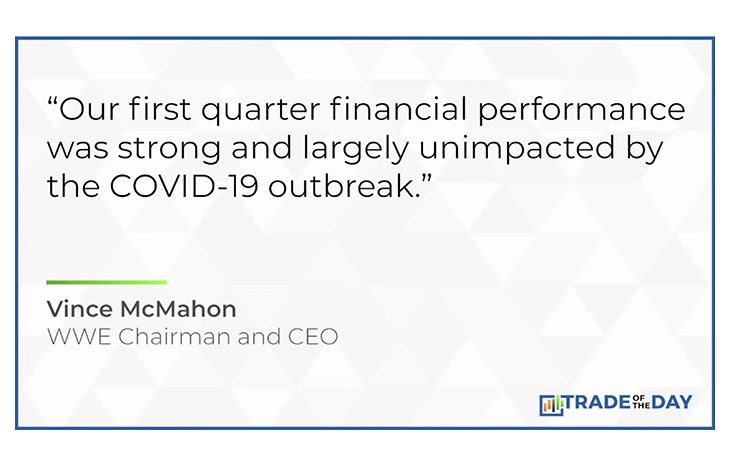 Out of work pro sports stars are making cameos at their wrestling events (which are still occurring, albeit without fans). They’ve maintained their lucrative television deals – and 40% of the country is now unemployed and looking to kill time – watching their events on TV.

You see, WWE produces original content 52 weeks a year – no off-season – and it goes out to a global audience.

For their latest WrestleMania event April 4th to 5th, they reported record viewership as well as more than 967 million video views across all their digital and social platforms. This was a 20% increase year over year. And now they’ll parlay this popularity even more. They just partnered with Netflix to launch a feature film.

Even during the time of the pandemic, the company is making sure that fans get fresh content to watch. Matches are being held in empty stadium.

North American ticket sales fell to $15.2 million from $24.1 million in the prior-year quarter due to staging of 49 less events. But that’s to be expected. From a chart perspective, there’s an unfilled gap from $50 up to $60. Shares currently trade around $46.50. Add it all up and WWE stock is a buy right now!

Signing up for our free Trade of the Day e-letter gets you access to our daily trade alerts. At 5 p.m. ET, Monday through Friday, you’ll receive a quick recap of one of the most important trades we’re tracking. These are often the trades that could lead to substantial wealth creation – and you’ll know about them well before anyone else.