Black Rifle Coffee Company Stock (NYSE: BRCC) went public just over six months ago, on February 10, 2022. The coffee company debuted through a reverse merger with a special purpose acquisition company (SPAC). Learn about what a SPAC is here. Unlike most reverse mergers, the stock remained steady for two months, growing more than 230%. However, since then BRCC has dropped all the way back to its $10 starting range. BRCC has a current market cap of $2.07B and an average daily trading volume of 504.64K. 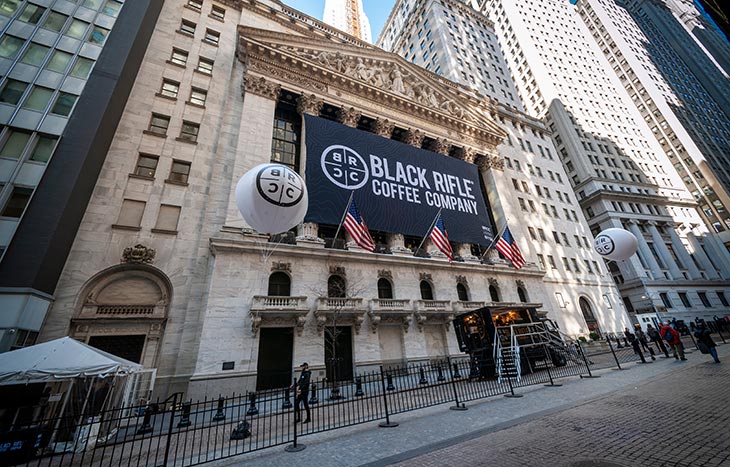 Black Rifle Coffee Company (BRCC) is a coffee company based in Salt Lake City, Utah, United States, owned by former members of the armed forces of the United States. The company sells military and veteran themed coffee, apparel and gear. It gained national attention in 2017, after pledging to hire 10,000 veterans in response to Starbucks’s pledge to hire 10,000 refugees. Read more about the controversy here.

Just this past July the company started a new partnership with Amazon Prime Video. The streaming service has a series called “The Terminal List” starring Chris Pratt from Guardians of the Galaxy. The series features BRCC’s coffees and merchandise in various scenes.

Black Rifle Coffee Company prides itself on its conservative, pro America values. Pro gun and pro-law enforcement. And obviously pro-military. CEO Evan Hafer also stated that he had voted for Trump in the past. Before starting BRCC in 2014, Hafer served as an Army Green Beret, as well as in the CIA.

“We develop our explosive roast profiles with the same mission focus we learned as military members serving this great country and are committed to supporting veterans, law enforcement, and first responders. With every purchase you make, we give back. Black Rifle Coffee Company was built upon the mission to serve coffee and culture to people who love America. Black Rifle stands for more than high-quality coffee. We are a Veteran-founded business operated by principled men and women who honor those who protect, defend, and support our country.” – blackriflecoffee.com

Politics have always played a role in the stock market. Since laws that are passed or not passed can literally create or decimate entire sectors of the stock market. Gun control and gun rights has obviously been a major issue in the U.S. Black Rifle Coffee Company does not shy away from its over the top displays of pro gun enthusiasm. In fact, they have an entire video where they play the Star Spangled Banner by shooting targets with a variety of weapons.

“‘Star Spangled STEEL’ from our friends at Black Rifle Coffee Company is the most badass version of the National Anthem you’ll ever hear or see. We promise. Guns. Grills. Trucks. Guitars. Patriotic bikinis. Fireworks. I mean, come on. The sound of ammo hitting the notes is truly incredible. Somewhere George Washington is smiling down (and also hella-impressed because this would be VERY difficult with a musket). Happy 4th of July, America!” – Watch the video here

Here are some of this month’s most recent price targets:

As with any investment, Black Rifle Coffee Company stock carries some degree of risk. However, now that BRCC has dropped below to the $10 mark, it is a much more enticing buy for investors. To start stabilizing your portfolio long-term, you need to stay up to date with the latest and greatest investing news. Fortunately, the team here at Investment U is dedicated to delivering the best investment newsletters right to your inbox. Sign up for a free e-letter and start making wiser, more profitable investments today!