In our latest Market Strategy Update, Senior Markets Expert and Financial Host Matt Benjamin answers a familiar question to many. Can this bull market continue through 2021?

Last Friday marked the one-year anniversary of the beginning of the massive COVID-19 market crash. In just about a month, the S&P 500 dropped by one-third – about 33.2% – from the high it hit last February 19. It bottomed on March 23 before beginning a rebound that was almost as steep as the decline.

By early August, the market surpassed its former high and went on to set new highs. As I write this, the S&P 500 is up about 74% from its March low. But that’s history. The question on investors’ minds now: Can the bull market continue through 2021?

Of course, there are many factors that go into the answer, including what the economy and the Federal Reserve do, as well as overall investor and consumer confidence about the future. And very likely one less-talked-about variable that I’ll get to below. Let’s go through them…

Are you yearning to dine out again? To get to a ballgame or the shopping mall? You’re not alone. When we’re deprived of something we enjoy for an extended period, we flock back to it in much greater numbers. For example, after the 1918 influenza pandemic began to subside in the U.S. in 1919, attendance at Major League Baseball games more than doubled.

Economists expect something similar in terms of consumer spending this year. And households are sitting on about $1.5 trillion in excess savings at the moment, according to Goldman Sachs. That number could rise to $2.4 trillion by midyear (partly because of the $1.5 trillion stimulus bill expected soon), driving GDP growth to a whopping 6.8% this year.

And some commentators say they’ve noticed a new attitude toward spending among Americans that they’re calling “YOLO” demand, which is short for “you only live once.”

Globally, the International Monetary Fund forecasts growth of 5.5% that will result from a “vaccine-powered uptick later this year” and strong policy support from the Fed and other central banks around the world.

One of the biggest debates among economists at the moment concerns inflation. Will it or won’t it return with a vengeance to squash the budding U.S. economic recovery… and will the bull market continue with it?

The massive amount of stimulus injected into the economy so far by the Fed and the federal government sent the overall money supply through the roof. The Fed’s broadest measure of how much money is circulating around the economy is called “M2.” That measure rose about 5.8% a year over the past decade… until last year. Since February 2020, M2 is up 26%.

The potential problem: That’s a whole lot more money chasing roughly the same quantity of goods and services. And that’s what causes inflation. Yet inflation has underperformed expectations for years. It’s not quite clear why. It’s possible it’s related to globalization. Cheap labor from China and other developing nations has driven down the costs of goods and services around the world.

Because of that underperformance, many investors don’t worry about inflation so much anymore. What they do worry about is how inflation measures will impact the actions of one organization…

The real worry in the stock market is that the Fed, which historically has had the role of removing the punch bowl just as the party gets going, will seek to raise rates at the first whiff of inflation.

But the Fed made it very clear last year that it’s willing to let the economy run hot for a while to regain the millions of jobs lost during the COVID-19 contraction. So most economists and Fed watchers expect Fed Chairman Jerome Powell and his colleagues to look past signs of inflation in commodity prices or consumer prices as they wait for the economy to return to normal.

But aren’t stocks – certainly U.S. stocks and, more particularly, tech stocks – already overvalued? By many measures, they absolutely are. Here, again, is one of my favorite charts. It’s the cyclically adjusted price-to-earnings (CAPE) ratio. Warning: Look away if you have a fear of heights. 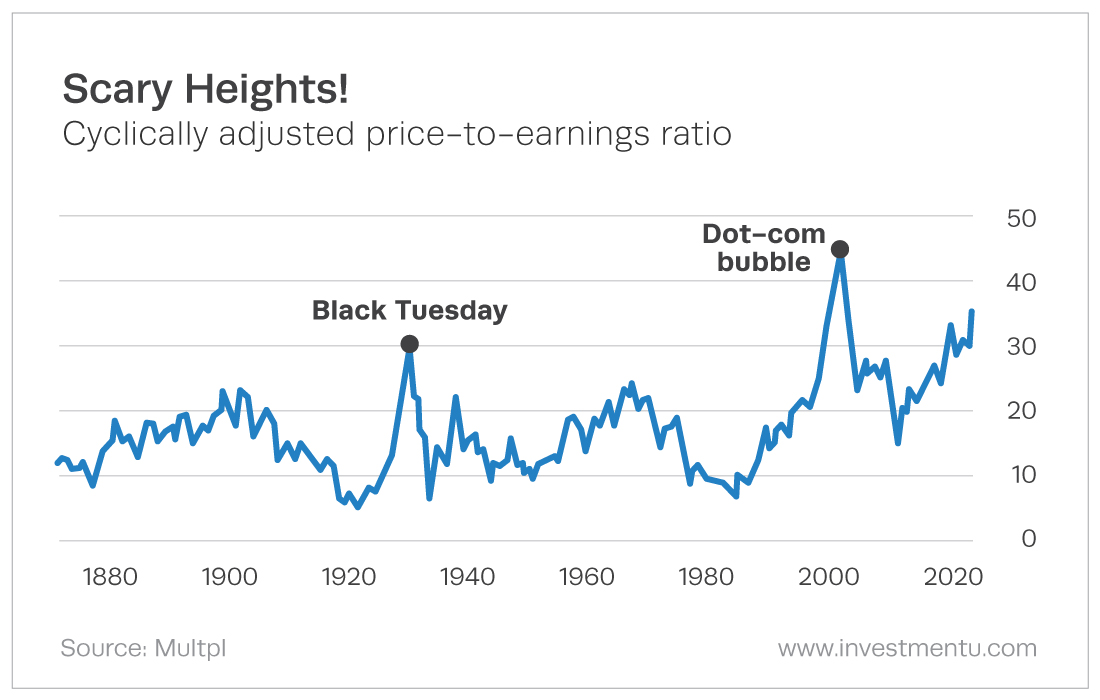 Yet much of that bubbly market behavior has emanated from a particular group of stocks, the mega-tech and “COVID-19 winners” – or those tech stocks, like Amazon (Nasdaq: AMZN) and Google’s parent company, Alphabet (Nasdaq: GOOGL), that have benefited from lockdowns. The NYSE FANG+ Index of large tech stocks is up 165% from that March 2020 low, more than double the rise of the broader S&P 500. Indeed, just 19 stocks drove half the broader market’s gain since March.As you can see, stock valuations are extremely elevated. The only other two times they reached these heights were Black Tuesday in October 1929 and during the peak of the dot-com bubble. Those episodes, if you don’t recall, didn’t end well.

So what many market watchers expect now – as the pandemic recedes and people venture out once again – is a rotation away from those stocks and back into airline and hotel stocks (“COVID-19 losers”), small cap stocks, and value stocks, among others. That would ease fears that the entire market is overvalued.

Finally, remember that the market is a forward-looking indicator. Ideally, it is pricing in the gains of the next six to 18 months. Chief Investment Expert Alexander Green is convinced that innovations in biotechnology, robotics, hydroponics and data communications will create more wealth in the next two years than has been created in the past two decades combined. (For much more on Alex’s amazing prediction, watch this video.)

So we’re seeing in the market what might also be a “predictive bubble.” These are exciting times, indeed. We should all be positioning our portfolios to participate in them.

Can this bull market continue? To find out the answer to this important investing question and many others like this, subscribe to our free Investment U E-letter today!