There’s a lot of overlap between CBD stocks and pot stocks. Which, of course, makes perfect sense. The cannabis plant has scores of active chemical compounds in it. One of them is delta-9-tetrahydrocannabinol (THC). This is the compound that gets stoners… stoned. 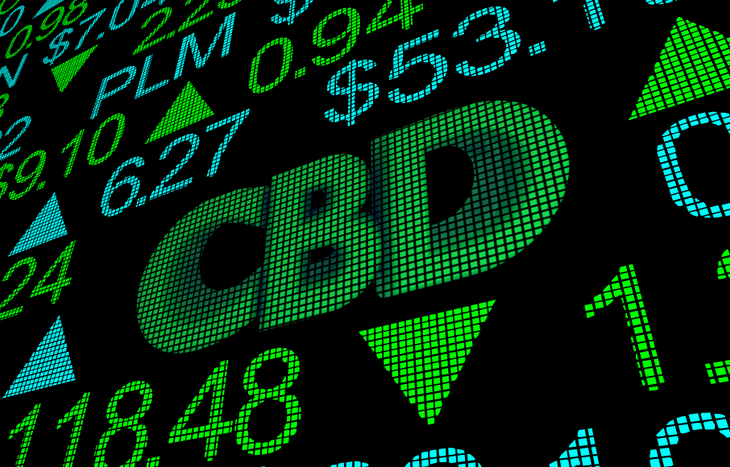 The other big one is cannabidiol (CBD). This compound has no psychoactive properties. But there are a whole lot of potential health benefits. Now, marijuana producers have no need to weed out the CBD. However, companies focusing on CBD do have to keep out the THC if they want to sell their products over the counter. But it’s not terribly difficult if the CBD is derived from industrial hemp. Which, unlike marijuana, is not a controlled substance.

To complicate matters even further, the Food & Drug Administration (FDA) hasn’t compiled a lot of information on CBD. So, it lingers in a state of near-limbo… due, if nothing else, to its close proximity to THC. It’s not quite legal. But based on how easy it is to find CBD products at the local pharmacy, grocery store and coffee shop; it’s obviously not illegal either. However, its legal status can depend on which state you live in.

Here’s how that works…

In 2018, President Trump signed the Agriculture Improvement Act. This is better known as the 2018 Farm Bill. In that act, there was a section that removed hemp from the Controlled Substances Act. Thanks to that bill, CBD – which can be extracted from hemp – was deemed legal on the federal level. The bill targeted the agricultural aspect, though. Compounds extracted from hemp – à la CBD – aren’t privy to the same complete green light as hemp itself. So CBD operates in a mixed jurisdictional realm.

The federal government won’t arrest folks for growing hemp anymore. Extracting CBD or possessing it isn’t a federal crime anymore either. Well, if there’s less than 0.3% THC content. But not all states see eye to eye with the feds. Some states still want to see more evidence of the benefits and lack of drawbacks. And in some states, CBD remains blacklisted.

But here’s a big feather in the cap of CBD. The Food & Drug Administration has approved a CBD product to treat Lennox-Gastaut syndrome. It’s also been approved to treat Dravet syndrome. To paraphrase, it’s been proven to help those suffering from certain types of epilepsy.

When Greenwich Biosciences received approval for its epilepsy drug, Epidiolex, it was initially considered a controlled substance. Simply because it was derived from marijuana. But when the company requested it be removed from the controlled substances list, the Drug Enforcement Agency (DEA) agreed. This was a big deal because it was the first time the DEA removed any type of cannabis compound from Schedule 1. And this could eventually prove to be a tipping point.

Regardless of what the FDA says, studies have shown that CBD can help to treat insomnia and anxiety. And it can even act as an antidepressant. It has also helped those dealing with chemotherapy and can treat acne. Nonetheless, not everyone remains sold on the prospect of CBD. And at least part of the problem is bad actors.

The FDA had to warn folks to stop claiming CBD could cure the coronavirus. Also, it probably can’t fix “dryness and frizz” in hair or prevent it from turning gray. That’s the kind of claim the FDA is looking out for. And more importantly, we know at this point that it can do some positive things. And here are three companies proving it…

Three CBD Stocks Worth Investing In

We’ll start with the big one. GW has essentially built its future and reputation on prescription CBD products. It’s the parent company of Greenwich Biosciences – the maker of Epidiolex. It has also received approval of its Sativex therapy in several countries. It’s a multiple sclerosis treatment that is a cannabis-extracted spray containing CBD. It’s used to treat multiple sclerosis.

Even right now, as some of its therapies remain in limbo, GW stock is pricey. But it’s proven to be insulted from the price swings of the marijuana market. The company also has an impressive pipeline of therapies in the works. And approval of them could send this CBD stock skyrocketing.

Charlotte’s Web Holdings can be viewed as the indicator of the CBD industry. If CBD sales are on the rise, this CBD stock will be one of the first to indicate it.

The company recently acquired the topical treatment manufacturer Abacus Health Products with the intention of expanding its product line. The plans have already paid off, with net revenue up 1% in 2021. And increasing product lines should only further help the company’s bottom line. This Colorado-based company has deals with major retailers, including Kroger (NYSE: KR), The Vitamin Shoppe and CVS (NYSE: CVS). Once the FDA clears up the regulatory uncertainty surrounding CBD food products, you can expect this stock to soar.

This company has two distinct segments: consumer products and drug development. The consumer products one is straightforward. It focuses on manufacturing, marketing and selling CBD products. On the other hand, the pharmaceutical division is constantly trying to push the needle and develop novel CBD-based therapeutics. But the company already has the top-selling hemp-derived CBD oil on the market.

CV Sciences’ PlusCBD Oil was the first supplement to receive “generally recognized as safe” (GRAS) status. And the company continues to grow its product line. The company is currently developing synthetic CBD-based medicine and is pursuing FDA approval for drugs. But again, once regulations around CBD are relaxed, this CBD stock is expected to see a major bounce.

The Bottom Line on CBD Stocks

Bills have been introduced to amend the Federal Food, Drug and Cosmetic Act and its regulations of hemp-derived CBD. The best guess as to why they haven’t moved forward is that Congress got distracted by the pandemic. But they should be picked up again. If the FDA finally gets out of the way, these CBD stocks are going to be major beneficiaries.

Unfortunately, for now the prospects of this budding industry are still tied up in politics. And the FDA’s approval (or lack thereof) can change the trajectory of these stocks quickly.