A Coronavirus Conundrum You Can Bank On

I don’t know about you, but my life looks a lot different today than it did three months ago.

Before the COVID-19 pandemic shut down stores, restaurants and my office, I left my house most days. And I was spending money almost daily.

Today, I get in my car and go spend money just once or twice a week.

Yours probably has too…

The balances in American savings accounts are growing. In fact, Americans are stashing away cash at record rates. It’s one of the most interesting side effects of COVID-19 I’ve seen yet.

But it makes sense. We haven’t been going anywhere for months, so we’re spending money mainly on essentials.

Outside of food and, ahem, adult beverages, my family hasn’t had much to spend money on…

All of this cash sitting around is at least partially causing the prolonged economic downturn. But it could be set to put more dollars in your register.

Americans are hoarding cash along with their toilet paper, hand sanitizer and baking supplies.

Americans’ personal savings rate is tracked by the Bureau of Economic Analysis (BEA). In April, it reached a record high of 33%.

That means Americans stashed 33% of their disposable income into savings accounts during the month of April.

As the chart below shows, that’s nearly twice the rate of the previous high reached in 1975. 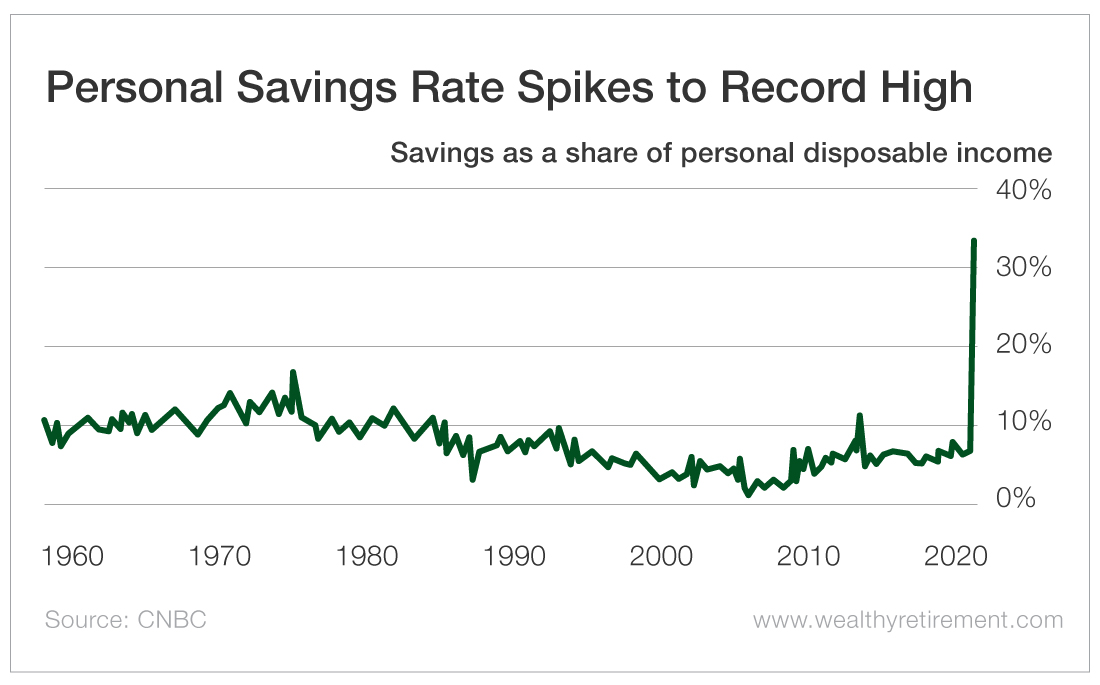 Savings Go Up as Spending Goes Down

In a lot of ways, Americans were forced to begin padding their bank accounts.

When the coronavirus lockdown began, I put my family’s spending on lockdown too – and I dumped the proceeds into our rainy day fund. The economic uncertainty was the only motivation I needed to significantly bump up my savings rate.

I canceled nearly all of our unnecessary subscriptions, like satellite car radio, and shopped around for new car insurance and home insurance to cut costs. A lot of those cancellations didn’t go into effect until after May 1.

I’m sure that I wasn’t the only one to slash my bills. And we haven’t seen the full impact of Americans’ spending reductions just yet.

I believe that May’s data will bring a new record decline in spending and another big increase in the savings rate.

Many Americans didn’t receive their stimulus money until mid-May. Those lucky enough to keep their jobs throughout the economic lockdown likely banked their stimulus checks as well.

When we see the May numbers, I think we could see the BEA’s savings rate climb as high as 40%… or even more.

The Good, the Bad and the Ugly for the Economy

Thirty-eight percent of respondents to a survey conducted before COVID-19 struck said they’d have to sell something or take out a loan to cover a $500 emergency.

Nearly 25% of Americans had no savings at all. They were ill-prepared to handle the most basic financial emergencies.

While those statistics are scary, it wasn’t all bad for the U.S. economy. In fact, America’s high spending and low savings rates were good.

The more people spend (and the less they save), the faster the economy grows.

So that’s why America’s new obsession with hoarding cash is making the economic downturn worse. It could even wind up prolonging the economy’s comeback.

Take a Profitable Dip by Investing

But even if saving money becomes the new norm, there will still be plenty of companies with enticing enough offerings to part savers from their cash.

This means there are still plenty of ways for investors to profit. There are lots of companies benefiting from the current financial and lifestyle change.

For example, here in Florida, pools have become a hot commodity. One installer reports that sales are up 400% from a year ago, proving that homeowners are willing to shell out $30,000 or more to improve their quarantine lives.

Pool company stocks are up too…

Pool Corp. (Nasdaq: POOL), one of the largest distributors of pool supplies, is up more than 57% since its March 20 lows.

Everyone wants to create their own backyard sanctuary.

The Home Depot (NYSE: HD) and Lowe’s (NYSE: LOW), two stores that sell almost anything you need to create your own backyard oasis, are up 64.6% and 95.01%, respectively, since hitting their lows on March 20.

Consumer spending may be down and savings may be up, but the consumer is not out.

Retirement Treat Yourself to a Healthy Retirement

Investment Opportunities Why Is Warren Buffett Holding So Much Cash?