Crude oil penny stocks are benefiting from the ridiculous oil and gas prices. And so are the people who are holding on to these stocks. When gas and oil prices go up, their stocks go with them. We saw some nice growth in 2021.

It’s likely we won’t such dramatic growth in 2022. But, probably some that is significant. Inflation is also good for oil stocks. And there is no shortage of that. And many strategists are predicting it to outperform other sectors for 2022. The long-term price projection looks promising, too. As demand climbs, so will the price per barrel.

One could argue that some of the oil industry’s growth could be eaten up by the constant “green initiatives”. And it does have its place in the market. But, our hunger for oil and gas is voracious. It will be a while before greener energy takes over. Probably at least a few years. More and more headway is being made on green energy and electric vehicles every day, though. So, it wouldn’t hurt to keep your eye on the industry.

Penny stocks are known to be extra volatile. This means you can make lots of money. This also means you can lose lots of money. Especially if the stock comes down in price and you panic sell. You can prevent yourself from panic selling by having a plan. Also, make sure you never invest money that you are not willing to possibly lose. Make sure you do thorough due diligence. 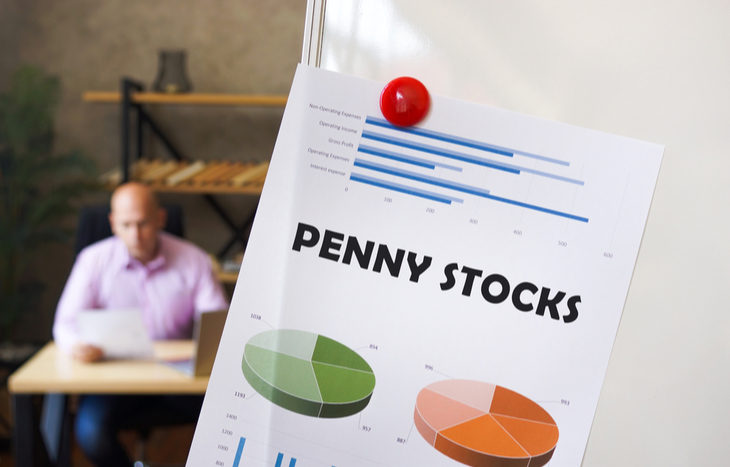 Cardinal Energy is a crude oil penny stock that’s been climbing for about a year. And it has some signs of slowing, but few signs of stopping. Its profit margins are incredibly high. In the triple-figures high.

It also used to offer a dividend. Those were paused, though, because of the huge collapse in oil prices in 2020. But, Cardinal plans to bring the dividend program back when they can reduce some debt. And it’s been able to do that in the past year. So, keep your eye open for some dividends in the future.

The company focuses on medium to light oil, and they draw it out of western Canada. So, they’re also listed on the TSX (Toronto Stock Exchange).

Baytex is a crude oil penny stock that’s also headquartered in Canada. With high profit margins, it’s easy to see why this stock has been picking back up the past months. Their board of directors have many decades of experience collectively.

They hold several resources where they derive oil from. Including some of the best producing oil resources in North America.

Tamarack is another great crude oil penny stock that’s broken out of its downward spiral. It holds strong core principals. Which include keeping a healthy balance sheet and constantly improving profitability.

Right now, the company’s focus is on two main oil resources in Alberta and Saskatchewan. It’s planning to invest up to $270 million into wells in 2022. And, it announced it will begin paying out dividends to shareholders.

Canada is a major producer of high-quality resource stocks. The natural landscape allows for some of the best quality raw materials in the world. And this applies to oil, especially.

Pipestone is another great crude oil company that’s in Canada. And in the past 18 months, it’s delivered over 900% returns to investors. Having been founded in 2019, Pipestone is still a baby. But, young companies often produce the best results. That’s because they can grow very quickly. And, if investors get in at “ground level,” and hold until the company has significant success? Well, I think it explains itself.

CGX Energy is a crude oil penny stock that’s headquartered in Canada. But, they do most of their business down in Guyana. They hold three different licenses that are specific to the Guyana Basin. And, they’ve pumped over 8 billion barrels of oil throughout the life of the company.

The management team obviously knows what they’re doing. The executive chairman has been listed as one of Canada’s 40 Under 40. Plus, many other team members have decades of experience. And success working for top companies, including ConocoPhillips and Kerr-McGee.

And the company stresses that it holds all involved accountable for their actions. In other words, the company strives to keep the business clean of any corruption.

Now, this crude oil penny stock is a little different. Ion doesn’t produce oil. But, it provides much of the necessary equipment and data rendering. And it offers these services and equipment to business who do produce oil.

It seems to be a foundational and very much needed company who has found an overlooked market. Often, overlooked markets and niches are the most profitable. You’ve heard that Earth is made up of many plates, right? Well, seismic activity is the result of all those plates shifting and interacting with one another. When these plates move, they scrape against the plate next to it, creating an earthquake.

Not all seismic activity creates an earthquake, though. Most of the time, it is very quiet and happens without anyone knowing. That’s where Ion Geophysical comes into play. The oil companies need to know what’s going on deep in the ground.

So, Ion will help them record and hold that information. It offers software, seismic data processing and even hold libraries of seismic data.

Athabasca is yet another Canadian crude oil penny stock that’s done well from the comeback of oil prices. Doing business throughout Alberta, it estimates many of its assets hold a 90-year reserve life.

That means it could go 90 years of pumping oil out of those reserves before it runs out. That’s a long time. And that significantly increases the amount of profit it’s making. Plus, it gives the company a great, long-term lifespan.