Some people plan to retire early. Others have early retirement thrust upon them, through no fault of their own. No matter which category your fall into, accessing your retirement accounts before your normal retirement age means falling subject to an early retirement penalty. 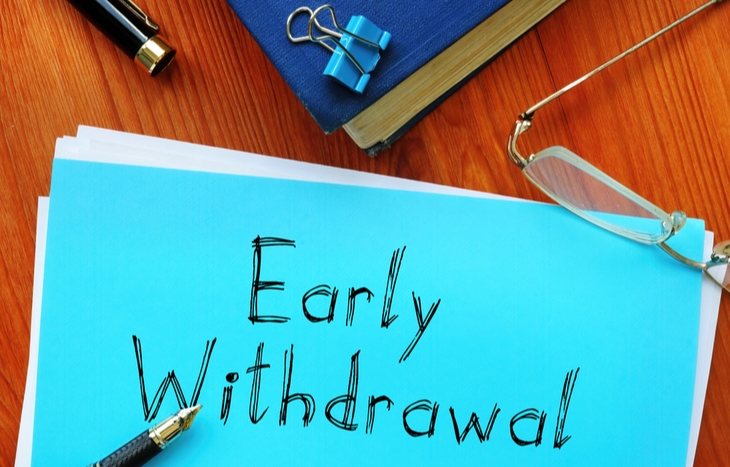 That means besides the worst-case 30 percent loss of taking social security benefits at 62, you could expect the following reductions, as per AARP:

If you must withdraw funds from a 401(k) or similar employer-sponsored retirement plan before reaching the age of 59.5, it will cost you. Expect to pay a 10 percent additional early withdrawal tax.

If you are unemployed, a reason many people end up involuntarily retiring early, you can avoid the 10 percent penalty to pay for health insurance premiums. Eligibility depends on receiving unemployment compensation for at least 12 weeks.

Should the owner of the 401(k) dies before turning 59.5, the beneficiary is not subject to the 10 percent tax penalty.

Withdrawals from IRAs before reaching age 59.5 are subject to penalties similar to 401(k) early withdrawal. The same exceptions regarding disability, unreimbursed medical expenses and funds to pay medical insurance premiums if unemployed apply.

If the IRA owner died before taking withdrawals, their beneficiary inherits the IRA. Rules on inherited IRAs depends on the beneficiary. A spouse can treat it as their own IRA and designate themselves as the account owner. They can also roll it over into their own IRA, or into a qualified employer plan. No other beneficiary can do this. However, if the surviving spouse is under age 59.5 and decides to take distributions, they will incur that 10 percent additional tax.

While non-spousal beneficiaries cannot claim an inherited IRA as their own, they are not subject to the 10 percent early withdrawal penalty.

There’s another way to avoid the 10 percent early retirement penalty on an employer-sponsored plan or an IRA. Substantially Equal Period Payments (SEPP) are a series of distributions for five years, or until age 59.5, whichever is longer. These payments can be taken on a monthly basis.

If you don’t meet the distribution requirements for the relevant time period, you are on the hook for the 10 percent early withdrawal penalty. Any SEPP modification triggers the 10 percent penalty. It gets worse. Penalties on the deferred interest on previous tax years come into play.

SEPPs are complicated, so you will need to discuss this option with a financial adviser. There are three ways to calculate a SEPP:

All methods use a life expectancy table. For the amortization or annuitization option, an acceptable interest rate requires specification. The IRS states that any interest rate that does not exceed 120 percent of the “federal mid-term rate published in IRS revenue rulings for either of the two months immediately before distributions begin” is acceptable.

Any discussion of early retirement penalties must include healthcare. If you are married and your spouse continues working, you might find coverage under their health plan. If you took an early retirement buyout and your company offered continued health coverage to sweeten the deal, that’s a bonus.

You still have the option of purchasing health insurance at HealthCare.gov. How much you would have to pay for coverage depends on various factors, including whether you choose a PPO, POS, HMO or another network. There are also bronze, silver, gold and platinum categories based on how much you pay for services and how much the insurance company pays. Whether you planned your early retirement or not, healthcare is a crucial decision.

An early retirement penalty affects your overall retirement income. For example, if social security was a mainstay of your projected income in retirement, a 30 percent loss seriously erodes your standard of living. On the other hand, if your retirement accounts are substantial and you have other savings, early retirement penalties may not affect you that much. That’s especially true if you plan to downsize or move somewhere where the costs of living are lower. Your early retirement withdrawal strategies are critical.