A Deep Dive into The 2 Best Electric Car Battery Stocks

By this point, the global transition toward electric vehicles has become apparent. Dozens of pure battery-electric cars are set to debut by the end of 2024. On top of that, other vehicles like buses, scooters and bikes are also rapidly becoming electrified. There are three main ways to play this trend. First, you can invest in electric vehicle stocks. Or, you can invest in complementary trends like EV charging stocks or electric car battery stocks. For now, let’s focus on electric car battery stocks.

The transition toward electric-only vehicles will almost definitely create a massive need for electric batteries. For instance, each new EV that enters enter the roads will need batteries to power it. This is similar to how the surge of intelligent electronics has created a massive need for computer chips. The surge in demand for batteries should drive battery prices higher. This should result in higher profits for the companies that manufacture them.

With that in mind, let’s take a deep dive at two companies that are currently in the best position to profit from this trend. 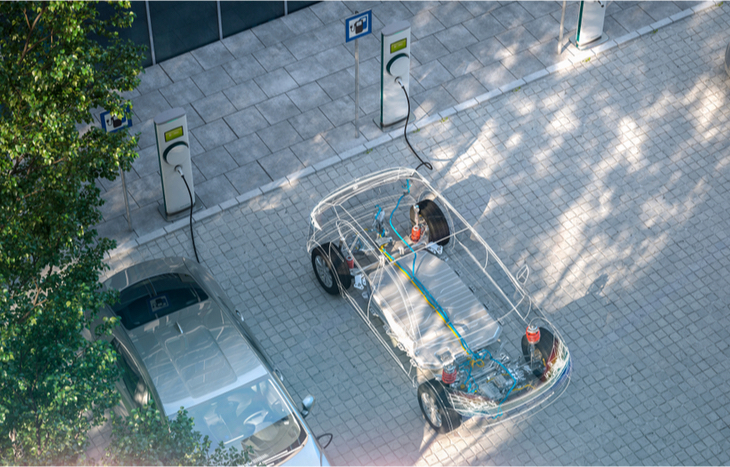 Lithium Americas Corp is a lithium mining company. Right now it’s very strategically positioned in the market and could very well be one of the top electric car battery stocks to own in the near future. Before jumping into it, let’s discuss lithium a little bit.

Lithium is one of the main raw materials used in EV batteries. As demand for EVs has risen, so has the price of lithium. In 2020, one metric ton of lithium cost about $6,800. In 2021, just one year later, the price soared to $17,000 per ton. This price increase even caught the attention of Tesla CEO Elon Musk. For example, Musk tweeted that Tesla might need to get into mining directly to save on costs.

Business Insider expects the lithium-ion battery market to grow by 21.7% CAGR by 2030. However, it’s not exactly easy to just ramp up the production of these batteries. That’s because the process of mining lithium is intense. It involves tons of upfront capital, environmental studies and permits. Permits have traditionally been very difficult to win. However, the government’s attitude towards lithium mining is shiting.

In 2021, President Joe Biden’s infrastructure bill allocated $6 billion toward developing a domestic electric battery supply chain. The key thinking was to mine U.S. mines for lithium. For instance, this plan would reduce America’s dependence on exporting countries, like China. More recently, Biden suggested implementing the Defense Production Act. This would give the U.S. government much more spending power. The DPA would essentially allow the government to subsidize any efforts to increase domestic metal and mineral production. Basically, the government would pay companies to mine lithium, nickel, graphite, cobalt and manganese.

What better company to receive these grants than a company called Lithium Americas? LAC’s CEO has stated that, in some cases, the government might pay for as much as 50-60% of a lithium mine’s construction. Developing a mine can cost hundreds of millions of dollars. Suffice to say, this funding would go a long way.

So far, this information could apply to almost any company that mines lithium or other metals. What makes LAC unique as one of the best electric car batter stocks?

The answer is that Lithium Americas has access to Thacker Pass, Nevada. Thacker Pass is the largest known lithium resource in America. LAC has spent the better part of the last decade acquiring permits at the local, state and federal level. These permits allow LAC the exclusive right to develop a mine in Thacker Pass.

On top of that, LAC owns the rights to miles of the surrounding mountains. These mountains could very well be filled with untapped lithium mines.

Lithium Americas estimates the value of this mine to be around $2.6 billion. However, this assumes a lithium price of $12,000 per ton. Lithium is currently selling for closer to $17,000 per ton. This number will likely continue to increase over time. As more EVs hit the road, the demand for lithium and lithium batteries is going to explode. In addition, as the only company with access to the U.S.’s biggest lithium deposit, this puts LAC in an excellent position.

LAC focuses on a very small part of the EV battery supply chain (lithium mining). This next company, Beam Global is the opposite. It’s one of the most diversified electric car battery stocks out there.

Beam Global is a San Diego-based company that “exists at the nexus of clean energy and transportation.” It offers solutions for EV charging, energy storage, energy security and outdoor media. Therefore, if there is one company that’s positioned to benefit from the electrification of America, it’s Beam. In fact, Beam claims, “We win, no matter who wins in EVs or EV charging.” To clarify, this is mainly because it offers such a wide range of products.

Beam’s key advantage is that it charges any type of vehicle. Most of the world’s EV charging stocks only charge EVs. But, Beam offers solutions for EVs, scooters, bikes, aviation and more. As you might have noticed, none of this really qualifies Beam as one of the top electric car battery stocks.

What About Beam’s Batteries?

The main reason that Beam is one of the best electric battery stocks is through its AllCell acquisition. For example, AllCell was already known for being one of the top EV battery producers and owns several patented technologies.

In the short term, Beam has $23 million in cash to fund its operations. It also currently has $0 debt, which is rare for companies in this space.

I hope that you’ve found this deep dive into two electric car battery stocks to be valuable! However, please remember that I’m not a financial advisor and am just offering my own research and commentary. As usual, please base all investment decisions on your own due diligence.