5 EV Battery Stocks to Help Power up Your Portfolio

Batteries are one of the most important parts of any electric vehicle. They give it the juice it needs to go. And these EV battery stocks might be able to do the same for your portfolio. 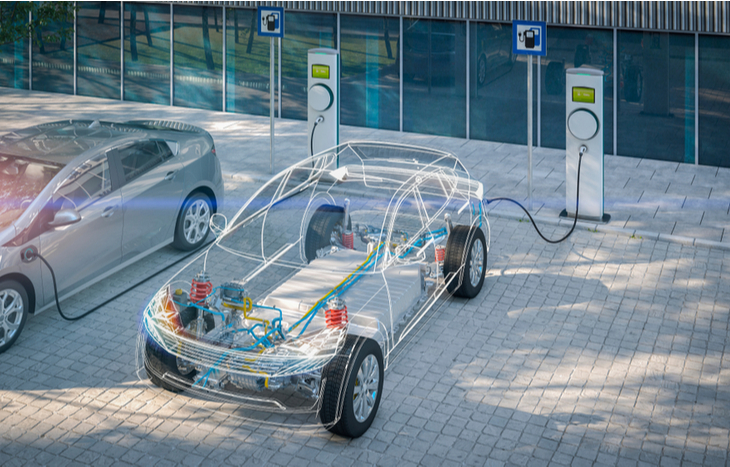 While batteries are nothing new and EV batteries have been improving quickly, there is still work to be done. They have a notoriously low energy density. Plus, range and charge times still leave something to be desired.

That’s because EV batteries are largely seen as the fuel of the future. That’s why these EV battery stocks are worth to keeping on your radar:

EV batteries are a crucial element of any electric vehicle. Other than the electric motor, these large battery packs are one of the biggest differences between EVs and internal combustion engine (ICE) vehicles. After all, most of what makes up an electric vehicle is similar to what every other car has, like tires, seats, and so on.

While electric vehicles actually date back to the 1830s, they haven’t had nearly the level of R&D poured into them that ICE vehicles have. Hence, there is still a lot of room to innovate… Particularly when it comes to the batteries.

And with various government incentives for EVs as well as future bans on the sale of fossil fuel cars, there is little doubt that EV sales will grow. So naturally, battery sales are expected to also grow. And that means there is an opportunity for investors.

However, deciding which EV battery stocks can be tricky. Because EVs have never had a firm footing in the auto industry, many of the companies producing batteries are startups. That means they don’t have long track records. And many are not profitable yet.

Nevertheless, EVs represent a growing sector. And those cars will need batteries. Thus, growth in battery sales is all but inevitable.

Here, we’ll go through some of the best EV battery stocks to buy if you want to invest in this growing sector.

South Korea-based LG Chem is a subsidiary of LG Corp. Many of us know LG for its subsidiaries that make TVs, PC monitors, and smartphones. But LG is also involved in battery production through LG Chem. In fact, it is one of the largest battery manufacturers in the world. It supplies batteries for major automakers such as General Motors (NYSE: GM), Ford (NYSE: F), and Tesla (Nasdaq: TSLA).

The company’s year-over-year net income is up 290% as of September 2020. And its profit margin has increased 136%. Meanwhile, its stock price has only increased modestly in the past year, from 705,000 KRW (South Korean won) to 740,000 KRW. That makes this a very interesting value investment among this list of EV battery stocks.

As its name suggests, Lithium Americas is focused more on lithium mining than battery manufacturing. However, lithium is a crucial component of EV batteries as it helps increase their energy density. That is one of the biggest issues with today’s EV batteries. So lithium demand is poised to surge as well. Lithium Americas has 100% ownership in Thacker Pass, the largest lithium reserve in the United States.

Although its net income is down 222% year-over-year, it has increased its cash on hand by 916% to $505 million. On this news, its stock price has more than doubled since December 2020. That’s why this is one of the EV battery stocks that’s received the most “buy” ratings from analysts.

We all know Panasonic. It’s produced everything from TVs to cameras to headphones over the years. But the electronics manufacturer is also getting into battery production. In particular, Panasonic is another company that has partnered with Tesla to produce batteries. While Tesla has aspirations to produce its own, cheaper batteries, it will keep buying batteries from Panasonic until at least 2022. That makes Panasonic a strong EV battery stock to consider. Its net income and diluted EPS are both up 878% year-over-year. On top of this, its net profit margin has increased a massive 701%.

Albemarle Corporation is a specialty chemicals company that produces lithium, bromine, and refining catalysts. As such, Albemarle is another organization that is not strictly a battery stock. However, its products are an integral part of the supply chain. To be precise, it is the world’s largest provider of lithium for electric vehicles, according to Reuters. Despite temporarily lower sales of lithium, the outlook remains positive, with a projected CAGR of 1.9% from 2020 to 2027.

Albemarle’s net income and net profit margin both show strong signs year-over-year, growing by almost 400%. In addition, its stock price has roughly tripled over the past year. The analyst consensus on the stock is bullish, with a near universal “buy” recommendation. That being said, it is a relatively expensive addition to this list of EV battery stocks. But keep in mind, you don’t need to buy a whole share in order to invest anymore. Most brokerages allow fractional sharing these days. You can learn how that works here.

This does make QuantumScape more of a speculative investments on this list of EV battery stocks. In this case, investors are banking on the potential for a breakthrough product. Still, QS has invested millions in researching this future battery technology. Its stock price has nearly doubled since a low in November 2020. And that alone could help it maintain its bullish momentum for some time.

There are scores of metrics to look for in any sector of the stock market. And the electric vehicle segment is no different. There are extremely speculative ways to play it. There are value stocks – which are considered the cornerstone of a strong portfolio. There’s also momentum investing – which comes down to a lot more than just timing the market. These are valuable strategies to know. And once you learn them, you can use them on EV battery stocks or just about any other investment.

If you want to learn more about how to employ these, we suggest signing up for the Liberty Through Wealth e-letter. By doing so, you’ll start receiving valuable research from stock market legend, Alexander Green. He’s helped guide thousands of subscribers towards investment opportunities of all sorts. All you have to do is enter your email address in the box below to get started.