Halliburton Stock: Is Now the Time to Buy?

Halliburton (NYSE: HAL) stock has been on fire this year. The stock is up over 70% year-to-date as investors pile into oil and gas stocks. The story of Halliburton is interesting because it does not produce oil or gas at all.

During the California gold rush, some of the best businesses did not produce an ounce of gold. Instead, they sold picks and shovels to the gold miners. This is the business model that Halliburton follows.

Halliburton is one of the world’s largest providers of products and services to the energy industry. For instance, the company sells drill bits, chemicals and software to its oil and gas drilling customers. Halliburton sells pressure pumping, processing and tools to customers to complete their wells for its oil and gas production.

Although Halliburton is based in Houston, TX, it’s a global company in over 70 countries. In 2021, its largest region was North America which had 42% of its sales. Another 25% of sales came from the Middle East and Asia. Latin America and Europe/Africa are the company’s other two regions which produced 15% and 18% of 2021 sales, respectively. 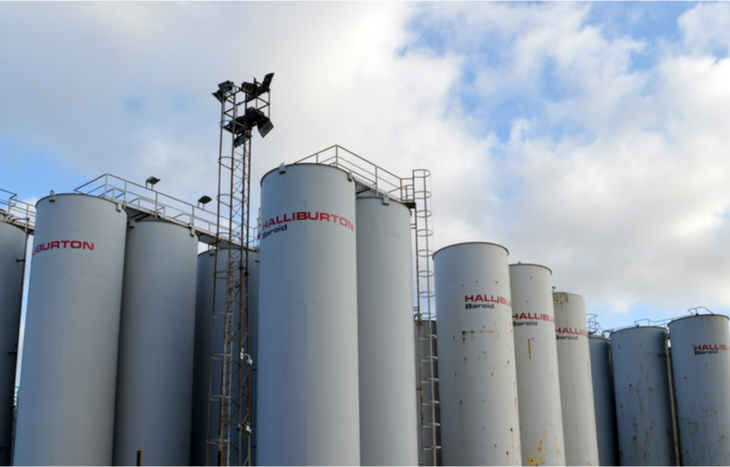 In Halliburton’s first-quarter press release, CEO and chairman Jeff Miller expressed optimism for the company’s future when he said, “I expect our strong international business to increase throughout the remainder of the year. First-quarter revenue growth in all our international regions together with North America demonstrates that this multi-year upcycle is well underway.”

Though Halliburton is positive about its business for the rest of the year, it did not give guidance for next quarter or full-year sales or profits.

Is Halliburton Stock a Good Buy?

Wall Street analysts rate Halliburton stock a strong buy. The high rating from analysts is likely due to increased oil and gas pumping from Halliburton’s customer base. Both oil and gas prices rose massively since the beginning of the year.

Leading up to Russia’s invasion of Ukraine, oil and gas prices began to rise. When the conflict became a reality, many countries issued sanctions against Russia because of their actions. That sanction included the elimination or transition away from Russian oil and gas.

Since Russia is one of the world’s largest oil and gas producers, supply in those markets dried up. Because demand for oil and gas stayed high while supply fell, prices kept moving up. The high prices meant oil and gas producers outside of Russia could raise production to make higher sales and profits. The increased production meant those companies would likely need help from Halliburton.

A quick stock valuation shows that Halliburton stock currently trades at a P/E ratio of 24x. On top of that, the stock pays a modest dividend yield of over 1%. The company has increased its free cash flow over the last few years. It has used the cash flow to reduce its debt by over $2.5 billion over the last two years. Based on the analyst full-year earnings per share forecast of $1.91, the stock is trading at a forward P/E ratio of just under 22x.

Sales for the first quarter came in at $4.3 billion. The quarterly sales were a 23% increase over the first quarter of 2021, sales of $3.5 billion. Sales in the North American region grew 37% to $1.9 billion. The increase was mainly due to higher pressure pumping and drilling services. In addition, Halliburton sold more completion tools in the Gulf of Mexico.

First-quarter sales in Halliburton’s international regions rose 15% to $2.4 billion over the same quarter last year. Much of the increase was due to higher product sales in Brazil, Argentina, Mexico and Egypt. In addition, increased drilling in Europe, Africa and Latin America helped sales.

After Halliburton put out the press release, managers held a webcast to discuss the first-quarter results. When the managers ended their talk, they took questions from listeners. You can find a link to a replay of the webcast here.

CEO Jeff Miller said, “The war in Ukraine deeply saddens us. We have employees in both Ukraine and Russia, and the conflict greatly impacts our people, their families and loved ones throughout the region.”

Earlier in 2022, the company opened its Halliburton Chemical Reaction Plant in Saudi Arabia. The facility will make a broad range of chemicals for the entire oil and gas chain.