Economists absolutely love to make forecasts. It’s what they do. And it doesn’t matter if the supporting data for their projections is paper-thin (it often is). It’s when they decline to make a forecast that I get worried. And it has me wondering: how bad will the 2020 recession be?

Fed watchers like me were expecting such extreme measures from Powell & Co., given the damage the pandemic is doing to the U.S. and global economies. And the potential recession that could ensue.

What I didn’t expect – and here’s the worry – was that the Fed would decline to issue its quarterly economic forecast. Which was due out today.

The Fed said it scrapped the forecast because it’s just too difficult to know how the virus will play out. Or what the impact will be on the economy. For now, there are no answers to as to how bad the 2020 recession will be.

The Bad News Regarding a 2020 Recession

Still, some economists are making forecasts. And they’re all over the map. Which is another indication that, at the moment, nobody really knows what will happen.

Last week, the University of Chicago Booth School of Business conducted a survey of 43 prominent economists. The following was one of the statements it asked them to agree or disagree with:

Even if the mortality of COVID-19 proves to be limited (similar to the number of flu deaths in a regular season), it is likely to cause a major recession.

Here’s a graph of their answers, weighted by each economist’s confidence in their response. 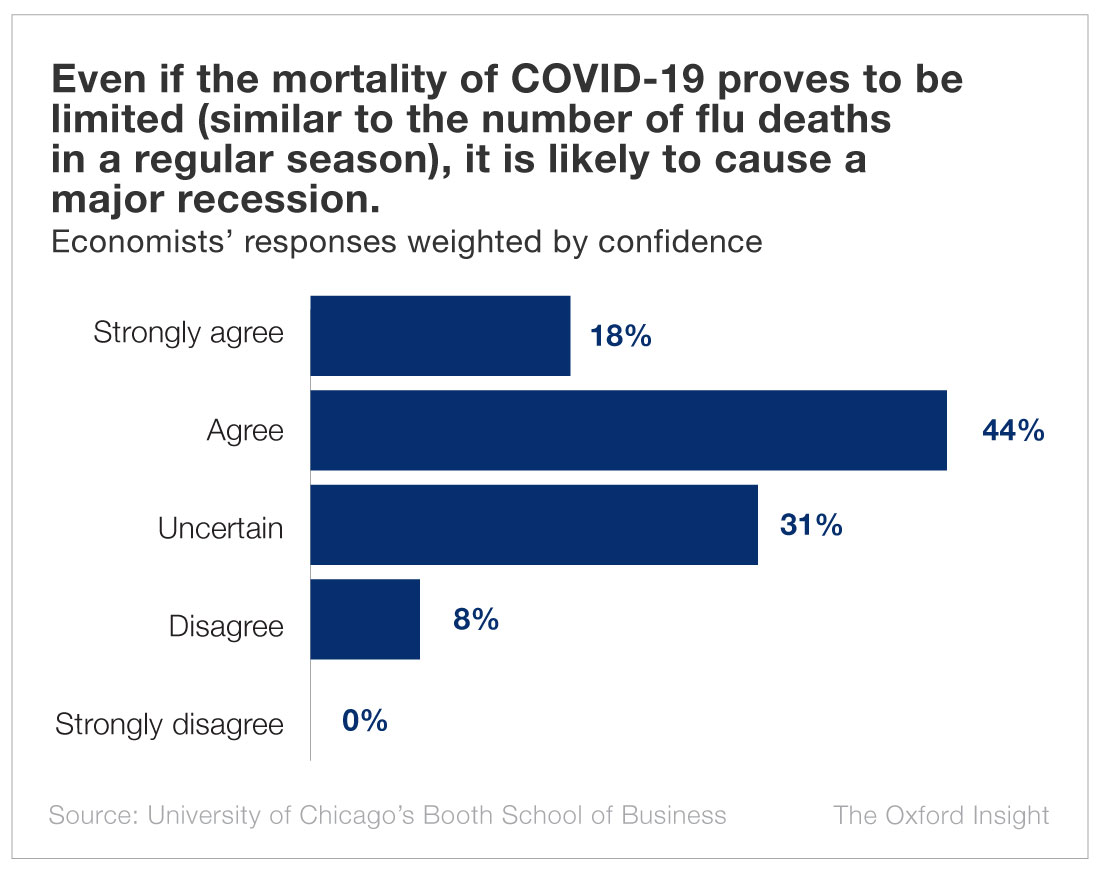 The reason these responses are so diverse, of course, is that it all depends on the virus. And nobody can predict the virus’s course right now.

It’s an understatement to say that the measures we’re taking to combat the pandemic – social distancing, isolation, separation – are extremely damaging to the economy. Akin to chemotherapy, you have to kill healthy economic activity – people interacting with people – to slow the spread of the disease.

At the extreme, several cities have ordered people to “shelter in place” for several weeks. Such an abrupt halt of economic activity is unprecedented.

So while these precautions continue or become even more stringent and widespread, the economy will only get weaker and weaker.

And, of course, some economists do have the hubris to venture a guesstimate of the economic damage, though these predictions are closer to guesses than estimates. Goldman Sachs, for example, forecasts that economic growth will fall to zero in the first quarter and will shrink by 5% in the second quarter.

I asked a few of our own experts for their thoughts on how the economy will react. Wisely, none of them were willing to put an actual number on how bad the recession could be. But their responses reveal the logic and reason that come from many years of watching markets and industries. As well as investor and consumer behavior.

“Unless the virus magically disappears, first and second quarter earnings are going to get smoked,” conducted a survey of 43 prominent economists told me. “However, once things return to normal, pent-up demand for nearly everything (except toilet paper) could boost earnings and perhaps even lead to inflation, as everyone will be clamoring to live life to the fullest after weeks (hopefully not months) of being deprived.”

Trends Expert Matthew Carr was optimistic too. He thinks May will be the month when the virus and its impact on markets and the economy begin to fade.

“So, the first quarter is a dud, the second quarter is a mess, and we could see lingering impacts seep into the third quarter,” Matthew told me. “The economy simply stopped on a dime. But it’s not the end of the world. And we should see a recovery in the second half of the year.”

Chief Investment Expert Alexander Green sees the U.S. economy weathering this crisis better than most. He also thinks the market’s reaction has been rational. Which is a good thing. “Just as the stock market discounted the bad news, it will begin to anticipate better news – and share prices will rise again.”

A month ago, I described the most common paths economies take in response to a major shock like the current one. If you read it, you’ll remember that “V” shaped recoveries are the best. That means a rapid drop in economic activity followed by a just-as-rapid rebound.

I predicted we’d see a “W” rebound as a result of the coming 2020 recession instead. That’s another leg down for the economy and markets. And now we’ve had several. But eventually a robust rebound when the worst has passed and people are eager to return to the mall, the movie theater or their favorite restaurants. That’s when pent-up demand and the national optimism kick in.

It’s comforting to me to see that same optimism among our own strategists. Their responses reflect one of our key tenets at Investment U in difficult economic environments: perspective, not panic.

Finally, I have a bit of anecdotal support for the optimistic outlook. A friend of mine has chronic bronchitis and can’t interact with anyone outside of his family until this pandemic subsides. He emailed me this morning that, the moment it does, we’re taking our wives out for the biggest martinis and steaks we can find.

That’s what you call pent-up demand!