What a crazy 24 hours it’s been in the markets…

I don’t know if you kept an eye on the aftermarket futures, but the Dow futures were indicating a move of negative 400 after Iran retaliated for the U.S. killing its top general by launching more than a dozen ballistic missiles at multiple bases housing U.S. troops in Iraq.

But then this morning, reports said that no U.S. service members were hurt in the attacks, which sparked a major turnaround.

As the market opened today, that 400-point loss on the Dow was trimmed to only 43 points. That was quite a major turnaround.

And then, it got even better…

After a U.S. press conference addressing the attacks, the Dow zoomed 200 points higher by midday.

Chinese delegation coming in next week, an accommodative Fed and an election coming up. Can anyone ask for a more delicious cocktail?

Why walk you through this market commentary?

It would seem like a huge market up day would spell trouble for anyone holding puts on a major semiconductor company.

After all, Advanced Micro Devices was the very best-performing stock on the entire S&P 500 in 2019.

So logic would have it that holding puts (which gain value when a stock moves lower) on the No. 1-performing stock on the S&P 500 – on a day where the markets are rocketing higher – would be a losing proposition.

But in this case, that’s not what happened…

You see, Advanced Micro Devices was lower today, and in The War Room we used the stock’s weakness to lock in another winning trade.

How did that happen?

We tracked a “Black Candle of Death” formation on the Advanced Micro Devices chart yesterday.

Simply put, a black candle formation is a sign of exhaustion.

If you can track them in real time, these formations tell you exactly when the bulls are losing steam and the bears are starting to take control of the steering wheel.

From a chart perspective, Advanced Micro Devices has been rather strong – but it sure seems like a pullback to $45 will come for the company before its next upside move. 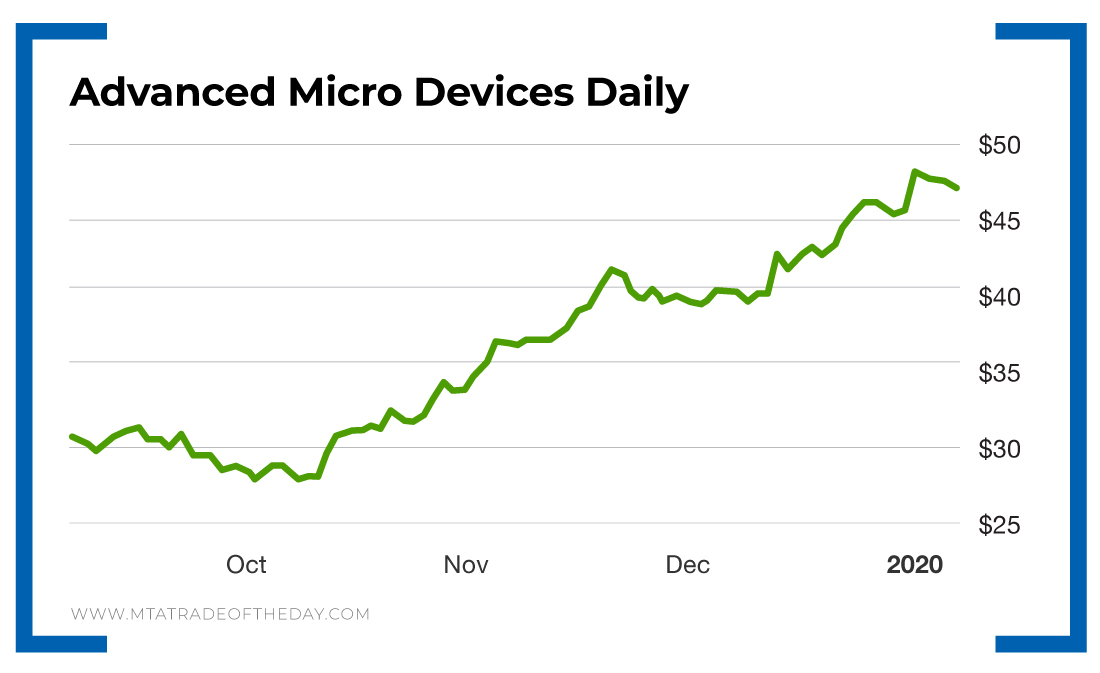 Action Plan: I wanted to illustrate this Advanced Micro Devices example because it shows you just how accurate the black candle formation can be. Now, I admit, you won’t see the black candle appear on the chart above.

You need to be tracking it in real time – which is what I was doing yesterday in The War Room. As soon as I saw it, I got members positioned in Advanced Micro Devices puts. And then today, despite a powerful market rally, the stock still moved lower – and members rang the register.

Investment Opportunities HP Stock: Is Now the Time to Buy?