If you’re reading this article from a computer or smartphone chances are you can thank Intel. This is because Intel is one of the main companies that helped create the modern internet age. This history is important for an Intel stock forecast going forward.

Intel was founded in 1968 by Gordon Moore and Robert Noyce. Gordon Moore is the same person who coined the phrase Moore’s Law.

Moore’s Law is a common projection in the world of computers. It states that the speed of computers will double roughly every two years. Over the same time frame, the cost to produce a computer will be cut in half.

So if Intel has used Moore’s Law to help grow its profits, can you use Intel stock to help grow your portfolio’s returns? 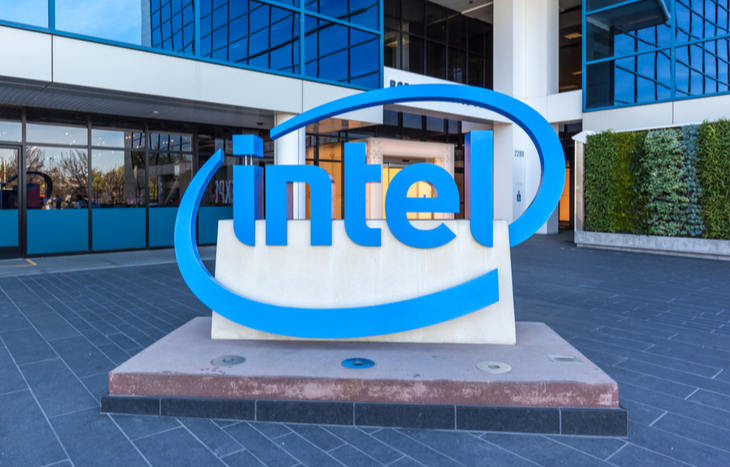 What Does Intel Do?

Intel is short for Integrated Electronics. Originally, the founders wanted to name it Moore Noyce (a combination of both founders’ names). However, this name was rejected when they realized that “Moore Noyce” sounds like “more noise.” With computers, noise is generally considered a negative thing.

Intel has five operating segments. However, over 80% of its revenue comes from producing PC processors and hardware components for servers, networks and storage.

With that said, let’s see what the company has been up to recently for this Intel stock forecast.

In 2020, Intel reported annual revenue of $77.9 billion and a net income of $20.9 billion. Intel’s profitability was not impacted too much by COVID-19. In fact, its 2020 annual revenue increased by approximately 8% year-over-year while net income stayed consistent.

Intel is also pays a consistent dividend. The steady cashflows help with an Intel stock forecast. It currently boasts a dividend yield of 2.99% based on a share price of close to $50. The quarterly dividend comes in at $0.365 per share.

With that said, let’s get into the important part. Should you consider investing in Intel stock?

If you’re looking for a stock that’s headed to the moon, Intel is probably not it. Since 2017, Intel stock has only increased by about 10 points. Its biggest single-year gain in recent years was only about 20%. In fact, the Nasdaq Index has outperformed Intel stock by about 160% over the past five years.

One main advantage of buying Intel stock is capital security. This is because processors and computer chips are most likely not going away anytime soon. In fact, they are probably going to get more prevalent. There’s so much talk right now about building the metaverse (check out these metaverse stocks) and Web 3.0.

It seems as though a future version of the internet is going to be more immersive. It will combine virtual worlds, augmented reality, the internet, blockchain and much more. This will require more processing power than today’s internet does. Due to this, it’s easy to imagine that Intel products will play a critical role in helping to build and power Web 3.0.

On top of that, in its Q3 earnings report, Intel highlighted that the 2021 PC total addressable market grew by double digits. Management also expects revenue to grow at a compounded annual growth rate of 10-12%.

Intel’s management has also stated that they are committed to growing the dividend moving forward. Last year, Intel paid out $1.39 per share to shareholders.

To me, Intel should be seen as a safe haven to park your money and collect dividends.

With that said, no stock is without downsides. These are important to consider with an Intel stock forecast. Here are some risks to consider before buying Intel stock…

There is still a severe chip shortage right now that’s impacting everyone from SpaceX to Nintendo. You might be inclined to think that a chip shortage means high demand for chips. This could mean more profit for chip producers such as Intel. However, creating advanced processors is much more difficult than making a pair of shoes or a can of Coke. Increasing production is a tedious process.

Intel’s CEO has mainly blamed the chip shortage on increased demand, the pandemic and poor relations with China. He also expects that the chip shortage will last for another year or so. Intel is not simply waiting for the shortage to end, though. It is currently building two new chip plants in Arizona.

A shortage today could also potentially result in surpluses down the road. Intel could scramble to raise production just for demand to fall over the next few years. If this happened, Intel could be stuck with higher costs, too much inventory and lower profits.

Intel’s business faces some risks. It has outlined them in quarterly earnings reports in the past. Among the most prominent were:

At the end of the day, Intel is one of the major players in a market that’s probably not shrinking anytime soon. And even amidst a global pandemic, Intel still printed almost $21 billion in profit. It is also committed to paying a healthy dividend to its investors. However, Intel also has quite a few risks to its business. Despite its continued profitability, Intel stock has not been moving up rapidly.

I hope that you’ve found this article valuable when it comes to learning what an Intel stock forecast could look like. As usual, all investment decisions should be based on your own due diligence and risk tolerance.