Earlier this month, I wrote about how “animal spirits” – the inherent human proclivity to optimism and risk-taking – can drive economic activity and push the stock market higher.

Consumers and investors demonstrate their animal spirits by spending and investing. Businesses express theirs by expanding operations.

And initial public offerings, or IPOs, are a great way to measure the level of animal spirits that businesses and entrepreneurs are feeling.

When a privately held company decides to go public, it’s a strong statement about its vision of the future. It means the company’s management believes it can expand the business, and so it decides to offer shares to the public for the first time in order to raise the capital needed to finance that expansion.

Interestingly, IPOs tend to come in “waves,” according to economic research.

Those waves are driven in large part by the private business community’s optimism about the prospects for stock offerings. That is, how well it feels an IPO will be received and funded by investors in public markets.

As you might expect, when the markets crashed in late February and March, the number of IPO filings plummeted, dwindling to just 12 in March and April combined, according to Renaissance Capital, which closely tracks the IPO market. Compare that with last year, when those two months together saw 49 new filings.

However, IPOs have rebounded strongly since the spring lull, and a wave seems to be building. 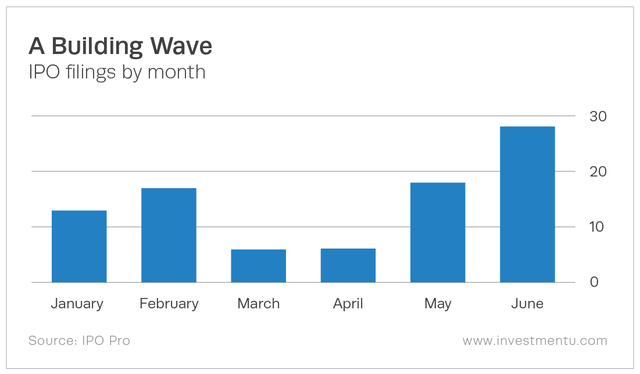 There were 18 filings in May and another 28 in June.

“After coronavirus volatility caused the slowest April and May since the Great Recession, IPO activity roared back in June, buoyed by stellar returns,” according to a recent Renaissance report.

These new stock issues did very well too, averaging a 38% first-day pop. The Renaissance IPO Index – which tracks new offerings – skyrocketed 52% during the second quarter, outperforming the S&P 500 by more than 30 percentage points.

And these aren’t all obscure companies either. Among the better known of those offering new shares recently were Warner Music Group (Nasdaq: WMG), which went public on June 3 to the tune of $1.92 billion, and Royalty Pharma (Nasdaq: RPRX), which IPO’d on June 15, raising $2.17 billion. Grocery giant Albertsons Companies (NYSE: ACI) raised $800 million in a June 25 IPO.

July could see even more companies go public than June did. So far, 13 firms are scheduled for a July debut, and it’s only the first of the month. There will likely be many more.

The exact number is hard to say, since some companies remain secretive about their plans. It can be embarrassing for a company to file for an IPO and then withdraw it due to a lack of investor enthusiasm or a lukewarm market environment.

So several companies have filed their IPO documents confidentially with the U.S. Securities and Exchange Commission (SEC). That means they don’t want to make the details of their upcoming IPOs public just yet, but they’re getting their ducks in a row.

Some notable private firms are expected to go public this year. These include delivery service DoorDash and online broker Robinhood Markets. Data and analytics firm Dun & Bradstreet is scheduled to IPO this week and raise as much as $1.38 billion.

The Importance of IPOs to the Broader Market

IPOs are a critical part of the stock market and the economy. Seeing them rebound is encouraging, indeed.

That’s not just because it illustrates a resurgence of optimism among investors and entrepreneurs. IPOs are also vital to the volume and diversity of companies to which we investors can choose to allocate our capital.

And that’s never been more important than today, as the U.S. stock market has been shrinking since 1996, when there were more than 8,000 publicly listed companies. Today, there are fewer than half that. 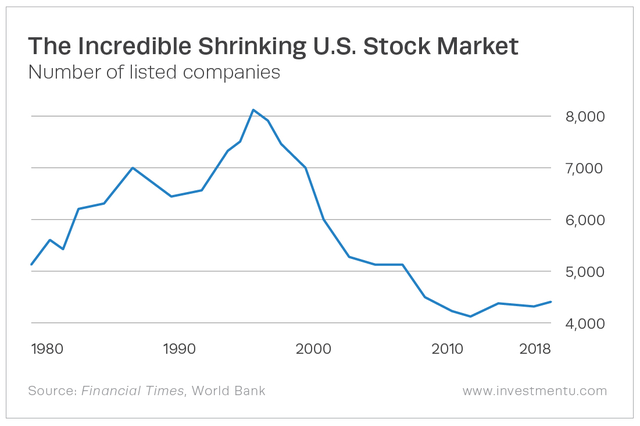 Allocating capital to the best new companies, those that will put it to use in the best ways to serve society, is what we investors and the markets do. IPOs are central to that process.