“Economic risks exist with regard to the coronavirus outbreak in the People’s Republic of China,” Germany’s central bank declared on Monday.

China, as the world’s second-largest economy and the epicenter of the outbreak, is at a virtual standstill. This after China’s gross domestic product (GDP) rose “just” 6.1% in 2019 – its slowest pace since 1990.

Meanwhile, Japan, the world’s third-largest economy, saw its GDP fall by a whopping 6.3% in the fourth quarter.

And Germany, the world’s fourth-largest economy, posted zero growth in the fourth quarter. And that was before the novel coronavirus scare.

Apple (Nasdaq: AAPL) – whose $1.4 trillion market cap is larger than the GDPs of countries like Mexico, Turkey and Saudi Arabia – just warned that its results will miss expectations because of the pandemic.

And yet, U.S. stocks hit record highs again last week – even as it became crystal clear the coronavirus’ impact was just starting…

At first glance, this makes no sense. If the global economy is heading into a tailspin, shouldn’t stocks be falling?

But while these are handy explanations in a pinch, the reality is nobody really knows why the market does what it does.

So rather than trying to always anticipate the market’s next move, long-term investors can benefit most from managing their own reactions to it.

Determine What You Can (and Can’t) Control

A recent tweet by Jon Boorman, president and CEO of Broadsword Capital, reminded me of some very important truths that often get overlooked.

In investing, there are many things you can’t control, Boorman notes… 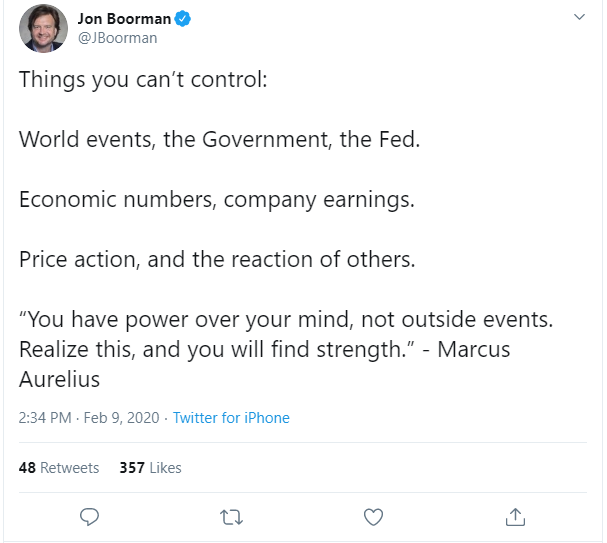 The first one is particularly interesting given the intense focus we’re currently seeing get paid to the Fed.

As I’ve written before, there’s tremendous debate about whether the Fed’s policy is right or wrong – but the reality is you and I have zero control over what the central bank is or isn’t doing.

Heck, even President Trump isn’t getting what he wants from the Fed. So why waste time and energy fretting about it?

In another tweet, Boorman argued that it’s even more important to focus on the things you can control… 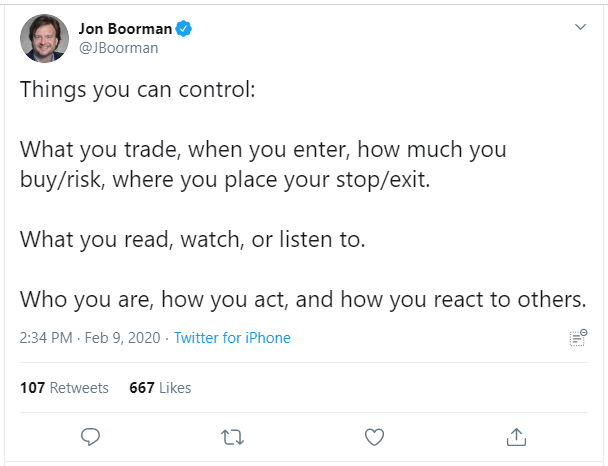 The first is obviously most relevant to investors. Unlike professional money managers, you and I don’t have to worry about “performance risk” or its modern cousin, fear of missing out (FOMO).

We don’t have to be fully invested and chase the “hottest” stocks. While it’s hard to watch a stock like Tesla (Nasdaq: TSLA) from the sidelines, stocks that go parabolic typically don’t finish out their runs well.

It’s all about gaining control over your own circumstances – and this includes determining your financial goals.

That’s why it’s critical to have a financial plan (and a timeline to accomplish it) that is made for your particular circumstances – one that can change as life events dictate.

The only time horizon that should matter to you is your own.

If you’re new to the markets, it can be very confusing. I often compare it to learning a foreign language. Investing does have its own vernacular, which can sound like gibberish to the uninformed.

Some of that, unfortunately, is by design. Historically, Wall Street sought to make investing sound complex in order to justify the fees that brokers would charge.

But as a general rule, if you really don’t understand something, you probably shouldn’t invest in it. Warren Buffett famously believes that, and if it’s good enough for the Oracle of Omaha…

Why There’s No Time Like the Present to Take Control

The good news is that now the combination of technology and index investing has driven fees and commissions to the lowest levels ever.

Arguably, it’s never been a better time to be an investor. You and I have access to far more information – and the ability to act on it at very low costs – than prior generations could’ve ever dreamed of having.

So, of course, things do move faster these days as we react in real time to the latest piece of corporate news, economic data or rumor.

With this in mind, remember to focus on the things you can control – like taking on no more risk than you’re comfortable with, avoiding overly complex strategies and using stop loss orders – and try to not get caught up in all the rest.

Retirement What Will Buffett Sell Next?